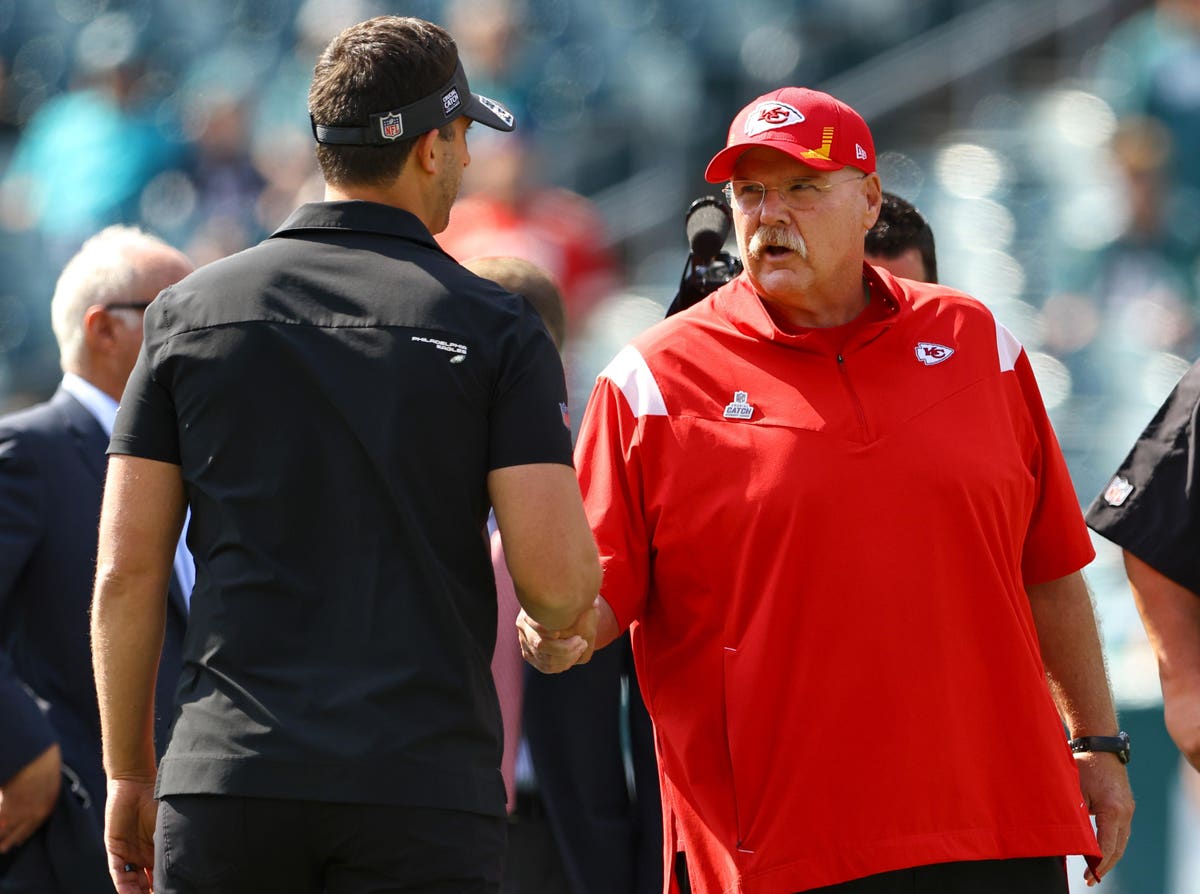 After the Chiefs defeated the Philadelphia Eagles — Reid’s former team — 42-30 on Sunday, it gave him 100 total wins with the Chiefs (including the playoffs) along with his 140 in Philadelphia.

“It was definitely exciting to kind of get him that win,” Chiefs quarterback Patrick Mahomes said. “And we were due to get him that.”

As is his style, Reid was businesslike in his comments about the accomplishment and his return to Philadelphia, saying he was glad it took place so that he could move on.

Reporters pressed him for further emotion during the postgame press conference.

“Do you want me to cry up here?” Reid joked. “I don’t have anything more to say and I’m sweating my butt off and I want to get back in the shower.”

During the week leading up to the game, Reid praised the City of Brotherly Love and its football franchise while stating he was singularly focused on the game at hand.

“I loved my time there, great people, great organization. They were tremendous to me and my family,” he said. “All that is great, but again we’re there to play this game.”

Indeed putting feelings aside and focusing on the task at hand was critical as the Chiefs desperately needed a win, having lost two in a row to leave them in last place in the AFC West.

In a contest that featured no punts, the Chiefs improved their record to 2-2 after Patrick Mahomes threw five touchdowns, including three to Tyreek Hill, and the team rushed for 200 yards.

But the game showed the Chiefs still have work to do on the other side of the ball if they hope to reach a third straight Super Bowl. A leaky defense allowed 461 total yards, including 358 passing yards, and didn’t force a turnover.

“It was an offensive day,” Reid said, “on both sides of the ball.”

More important than Reid’s win in his Philadelphia homecoming is that he was even on the sidelines at all.

After the loss to the Los Angeles Chargers, the 63-year-old Reid suffered a health scare. He was rushed to the hospital and had to miss both the Sunday and Monday press conferences.

Reid was able to return to work, never missing a practice before earning his 240th career victory.

Trailing only Don Shula, George Halas, Bill Belichick and Tom Landry, Reid’s 240 wins are the fifth most wins of any head coach in NFL history. Reid also has the fourth-most playoff victories (17) in league history — a result of his time in both Philadelphia and Kansas City.

He joined the Chiefs, following his dismissal from the Eagles at the end of the 2012 season.

“I’m glad they let him go,” Mahomes said. “And he’s here coaching us in Kansas City.’

Last season Reid signed a six-year contract extension that would keep him with the Chiefs through 2025 and he has said he wants to keep coaching until his 70s.

In the midst of his ninth season in Kansas City, Reid already is the third-longest tenured coach in team history behind Hank Stram (15 years) and Marty Schottenheimer (10).

Reid had the longest head coaching tenure of any coach in Eagles history, having guided Philadelphia from 1999 to 2012.

“I’m glad we glad we got to (record his 100th win) in Philadelphia, where he kind of came into his own,” Mahomes said. “It’s special to him, for sure. He kind of became Andy Reid in a sense in a Philadelphia.”

Reid said he loved the city, calling it a “unique” and “great place.”

Though much of the Philadelphia front office, including general manager Howie Roseman and owner Jeffrey Lurie remain, the Eagles only have three players from Reid’s tenure on the roster: Jason Kelce (Travis’ brother), Fletcher Cox and Brandon Graham.

Reid, who said on Wednesday “there wasn’t a cheesesteak that I didn’t like,” mentioned the hospitality he received during his visit to his former city, including the abundance of food and cheesesteaks.

After a much-needed and historic victory in Philadelphia, it was one he could savor.