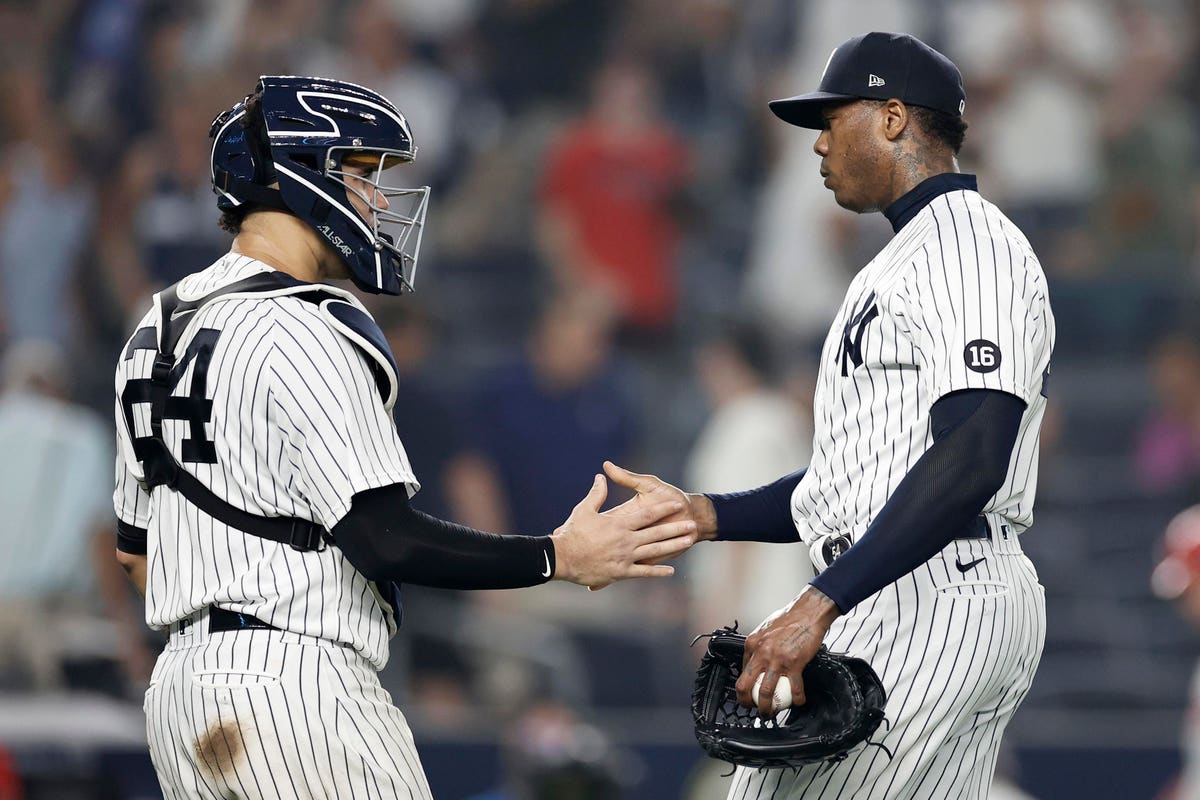 It was not that long ago that Aroldis Chapman’s performances were becoming a high-wire disaster act, the type that got him moved out of the closer’s role and into low-leverage spots.

Those low leverage spots were designed as ways to get Chapman chances to figure it out and in those situations he seemed to do, prompting a return to the mound for save situations when the Yankees were locked in lengthy struggles with the Philadelphia Phillies after showing signs of encouragement by using a makeshift lineup to win two games from the Boston Red Sox.

The last two nights were not necessarily well played and perhaps one can make the argument they are the case for the mediocre nature of teams around .500 and a few games over .500, but the performances of Chapman can be viewed as among the more encouraging signs.

Two appearances does not mean a struggling pitcher is back to his normal ways of dominating hitters but it is a start and if those continue in any save situations in this weekend’s pivotal four-game series at Boston and next week’s three-game series at Tampa Bay, then the Yankees can feel better.

But there’s no doubt the Yankees liked what they saw against the Phillies, who faced Chapman twice while going a combined 3-for-21 with runners in scoring position in the series.

On Tuesday, Chapman came in with a three-run lead and while he allowed a homer to Andrew McCutchen on a 100 mph fastball, the rest of his outing was a blazing display of velocity, the kind often seen through his June 6 when he owned a microscopic if not almost absurd 0.39 ERA.

He fell behind 3-0 on Bryce Harper on fastballs but went to the slider for a strikeout. After McCutchen homer, he fanned Rhys Hoskins on three pitches over 100, including a 103-mph strikeout pitch and then ended with a strikeout of Didi Gregorius at 102 mph.

“To fall behind 3-0 to Harper and just make some really good pitches against him was huge,” manager Aaron Boone said. “Then (after the McCutchen homer) it was right back to, I thought, really got locked in with his delivery, pounded the zone.

“You saw the velocity up, overpowered Hoskins and then the same with Didi. I think he just got in a really good place with his delivery, was on line and the stuff was there. So, encouraging again.

It was a long time since comments like that were made about Chapman, who like many closers goes through phases of ineffectiveness, though this was one was so drastic it resulted in low-leverage outings.

The trouble started four nights after his non-save outing against Boston, Chapman’s troubles began in Minnesota. He gave up four runs and four hits in a span of nine pitches while getting beat with his slider once and his fastball three times when those pitches were not thrown harder than 97.8 mph and when Nelson Cruz’s homer sailed into the seats, Chapman had a 1.96 ERA.

Two days later Chapman allowed a game-winning single to Jean Segura in the 10th inning at Philadelphia when he got beat with his slider. He converted four straight saves, including June 19 when his final pitch to Matt Chapman was 103.4 mph. That resulted in a strikeout hours before the NBA champion Milwaukee Bucks outlasted the Brooklyn Nets in a classic Game 7 45 minutes away from Yankee Stadium.

A day later, Chapman was even more wobbly, putting two in a span of nine pitches before getting a triple play on a day he topped out at 98 mph and survived the nail in his left finger breaking.

Then came the run of three disasters against the Kansas City Royals, Los Angeles Angels and New York Mets. In a span of 61 pitches to 14 hitters, Chapman recorded four outs while allowing nine runs, five hits and six walks.

On June 23 against the Royals, he allowed two singles and then could not throw a strike against a backup catcher (Sebastian Rivero). In fact, he was not even close to the strike zone, throwing two pitches in the dirt, one off Gary Sanchez and another that was a foot outside. It was a 41-pitch outing and the next time he took the mound it was around 1 am after and a slider to Jared Walsh on June 30 marked the first time Chapman gave up a grand slam, triggering a run of maddening losses that made people wonder if this would be a lost summer and a slog to the finish.

It seemed that way after 5 p.m. on July 4 when Chapman got beat with his slider as part of a six-run seventh inning in a 10-5 decision to the Mets. He threw a high fastball that Pete Alonso swung and missed badly at but went to the slider and it landed over the fence.

Since then, the Yankees are 9-3 heading into their biggest series of the season to date. Chapman’s contributions to the cause were minimal but three scoreless outings were good enough and the outcomes from the past two nights an encouraging start for someone who the Yankees will lean on significantly as part of the high-wire nature of closing out games when your name is not Mariano Rivera.

“If we’re going to be the club we hope to be and get to where we want to go, ‘Chappie’ has got to be the guy back there,” Boone said. “We got to get him going. I think his last few outings he’s starting to build back to where he was.”

If Boone’s statement from Tuesday proves accurate, he will continue to make similar comments and the Yankees will return home Aug. 2 even closer to a playoff spot after surviving a disastrous few weeks from their closer.