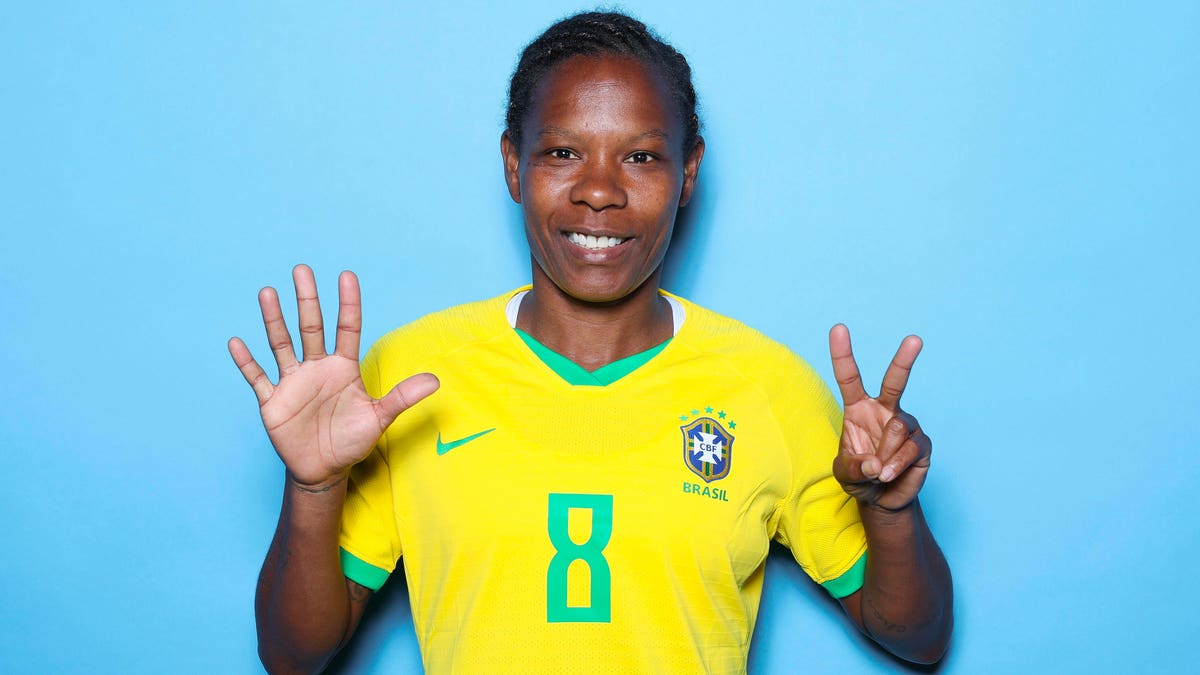 When she steps on the field for the Brazilian National Soccer Team against China at the Miyagi Stadium in Rifu, Japan on Wednesday, the 43-year-old Miraildes Maciel Mota, known around the world as Formiga, will maintain her record of competing in all seven women’s Olympic soccer tournaments since the sport was introduced into the Games in 1996.

Remarkably, Brazil first match of the tournament against China will come 25 years to the day since Formiga first played in the Olympics, a 2-2 draw with the then world champions, Norway at the RFK Stadium in Washington on July 21 during the 1996 Atlanta Games.

Records of longevity are nothing new to the Brazilian midfielder, who in 2019 became the first soccer player of either gender to play in seven FIFA World Cups. On December 1 2020, she became the first South American footballer in history to win 200 international caps when she played in a 8-0 win over Ecuador. However by competing in her seventh Olympic Games in Japan this month, Formiga moves into an even more rarefied strata of sporting achievement.

Heading into the delayed Tokyo 2020 Olympics, only 31 athletes since 1896 have ever taken part in seven or more Games, headed by the ten-time Olympian, Canadian show-jumper Ian Millar. Only three women in history have competed at more Games than the Brazilian – the Canadian coxswain Lesley Thompson, German/Italian canoeist Josefa Idem and Georgian shooter Nino Salukvadze. Formiga will become only the eleventh woman to take part in seven Olympics and the first-ever Brazilian, overtaking five other athletes from her country who have competed at six Games. More significantly, she will become the first seven-time Olympian of either sex in a team sport.

However, Formiga’s career is much more than just a set of statistics. For the past 26 years, she has been the fulcrum of the Brazilian national team, a consistent starter, even now in her forties. Yet when she was born in Salvador in the north-east state of Bahia in 1978, it was still illegal for women and girls to even play soccer. A 1941 decree by the National Sports Council in Brazil declared that women “will not be allowed to practice sports incompatible with the conditions of their nature”. Echoing similar bans in England and Germany, which deemed soccer too dangerous for women to play, it was not overturned until 1981.

Formiga began playing street soccer at the age of 7, moving to São Paulo to train full-time after impressing a visiting scout. Believing she had a gift for the game, she cited another defensive midfielder, Dunga, the 1994 World Cup winning captain of the Brazil’s men’s team, as her example growing up. She reputedly earned her nickname of Formiga, the Portuguese word for ant, due to her small frame and unselfish work for the team in the middle of the field.

Aged just 17, she was selected to travel with the Brazilian squad to Sweden for her first Women’s World Cup in 1995, making two substitute appearances, but a year later by the time of the 1996 Atlanta Olympics she had become a starter, a position she maintains 25 years later.

Despite winning six South American championships and Gold at three Pan-American Games, a global title has eluded Formiga in that time. In the first decade of the 21st century, she was at the heart of a glittering Brazilian team spearheaded by Marta and Cristiane which finished as Silver Medalists in the 2004 and 2008 Olympic Games, each time succumbing to the United States, and runners-up to Germany in the 2007 FIFA Women’s World Cup.

Formiga briefly retired from international football after the 2016 Rio Olympics, but was persuaded to return by the former national team coach Vadão for the Copa America Femenina in 2018. Her recall highlighted the paucity of young players coming through in Brazil to replace her. In an interview with Goal in 2019, Formiga admitted that “there’s no proper work done to ensure we kick on and bring through new generations here in Brazil, there simply isn’t. We can see that happening abroad, while here we still face the same challenges as before. It’s hard.”

“I don’t want to be remembered as the player who played for so many years, who was at all those Olympic Games and World Cups, but as someone who fought for improvements in women’s soccer in my country.”