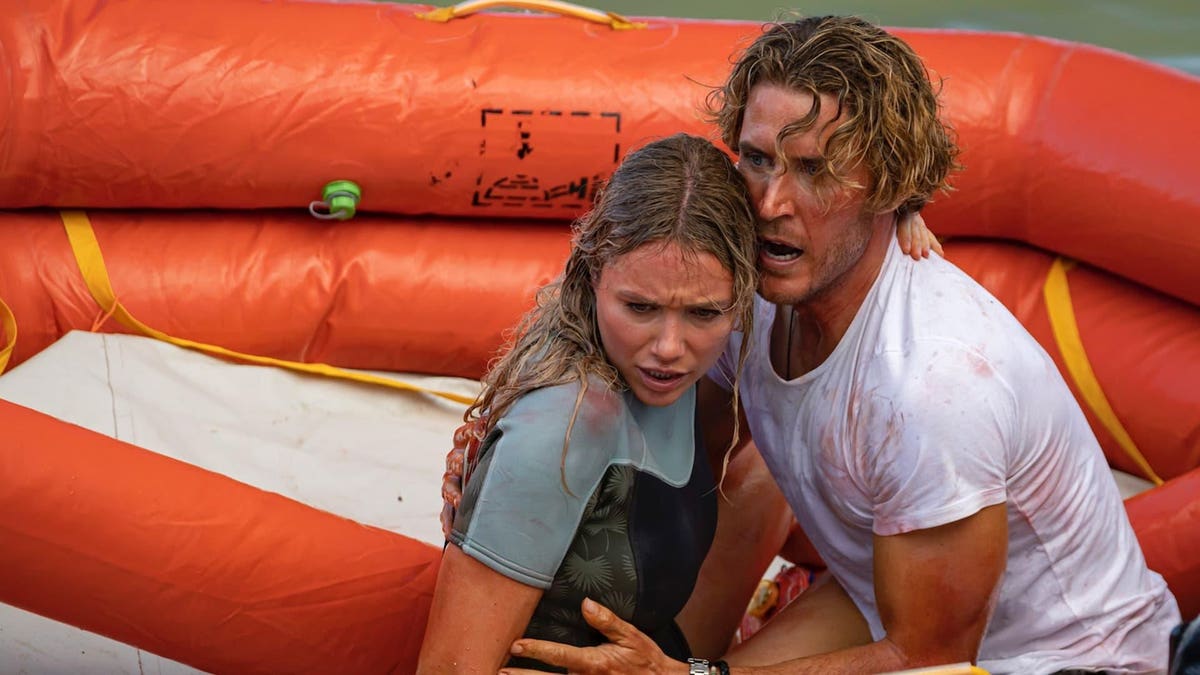 Katrina Bowden is no stranger to horror. The actress, widely known for portraying ‘Cerie’ on the beloved sitcom 30 Rock, is also known in horror circles for performances in cult classics like Piranha 3DD and the exceptional Tucker & Dale vs. Evil. Her new film, Great White (directed by Martin Wilson from a script by Michael Boughen), sees the actress tread dangerous waters as the protagonists are endangered by a great white shark. I spoke with the actress about the film and her character.

JE: What attached you to Great White?

KB: I was sent the script and the offer… I’d never done a shark movie before, and I do love doing thrillers and horror, genre films. This one was very different… it’s a classic shark movie in so many ways, but its also very character driven. There are a lot of cool, tense, quiet moments. I really love the character and really felt drawn to her, and I was just super excited to sign on and take on this challenging role and have some fun with it. I think it turned out really, really great.

JE: Can you describe your character Kaz in your own words?

KB: Kaz is a very strong female character. She worked for many years as a triage nurse and is living in Australia with her boyfriend, and she gets caught up in this crazy, crazy moment where they are… obviously they’re being hunted by a shark in the middle of the ocean. Everything kind of goes wrong, and she is the character that really takes charge. She’s calm and collected through all of it and really pulls through and I really felt really felt drawn to that type of strength in her. She’s just a powerhouse of a female while also remaining a very true female character.

JE: Obviously this isn’t your first foray into horror… what is it about the genre that keeps you coming back?

KB: I do really love a physical challenge, and I love taking on roles that are a little bit different for me. Even though I’ve done this genre a handful of times, every one that I’ve done is a little bit different character-wise and the type of movie it is. I just have a lot of fun with them, I think it’s a fun genre. And I think especially the shark movie genre is something that I’ve never done before but something that I was really intrigued by, because I personally was terrified of sharks. I thought it would be really, really cool to do a movie like this, especially one that was so character driven and that I could really sink my teeth into… pun intended.

JE: What was the most challenging part of this shoot?

KB: I would say the underwater shooting was the most challenging part. I knew it was going to be hard, but I wasn’t quite prepared for how hard it was! We shot all the underwater scenes (which there are a lot of them towards the end of the film) in these big aviation tanks, and it was the kind of schedule where it was pretty grueling. It’s so hard to see underwater, it’s so hard to get your eyeline correct, and holding your breath is a big issue. We worked with our team very, very closely to map out exactly how I was supposed to be swimming, where to look… It was a lot of choreography underwater, which just took time and a lot of practice.

Myself and the other actors went scuba training as well. It was just a world I didn’t know anything about, so it definitely had a lot of challenges with that… and also being on the raft for hours at a time in the hot sun in Australia. It was pretty grueling but that was what made it so fun. It was such a challenge. And I like to think that I thrive in those kind of environments so it was really fun for me. Even though we had some really stressful, chaotic days we all had a really good time.

Great White will be available in theaters and on VOD on July 16th.