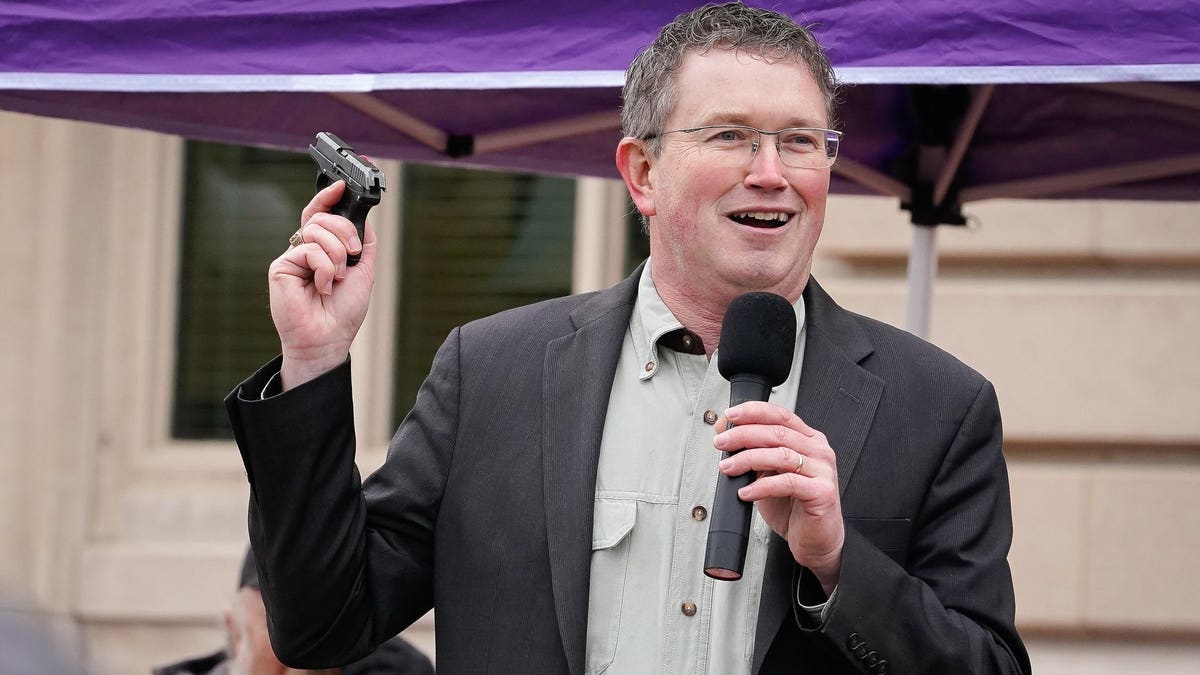 Rep. Thomas Massie (R-Ky.) tweeted a Christmas photo of his family Saturday in which they’re all holding guns and smiling in front of a Christmas tree, with the caption: “Merry Christmas! ps. Santa, please bring ammo,” days after a mass shooting at a Michigan high school sparked renewed calls for gun control measures.

In the photo, Massie appears to be holding an M60 machine gun seated next to his youngest daughter, who sports an Uzi, while his wife, three other children and another man hold assault-style rifles.

Last month, Massie retweeted a video of the not-guilty verdict in the trial of Kyle Rittenhouse, with the caption, “There is hope for this country.”

Massie, an MIT grad, is an ardent gun rights advocate and Trump loyalist, who told CNN in 2017 he believed in the “deep state”; he drew controversy in 2019 after seeking to legalize raw milk even though the U.S. Centers for Disease Control and Prevention warns human consumption of it has severe health risks.

After the Jan. 6 Capitol attack, he tweeted he and other members of Congress were “glad to be armed” while they barricaded themselves in their offices.

The tweet drew criticism with one user replying, “Two things. Totally appalling after the latest school shooting. And if anyone sitting down had discharged their weapon, someone else would have been shot.” But some users were in support of the photo, as one user tweeted: “Love it.” Massie’s Christmas photo comes against the backdrop of a heated debate over gun control, divided along party lines. According to a Quinnipiac poll conducted last month, 13% of Republicans said they were in support of stricter gun laws compared to 91% of Democrats. Just hours before Massie’s tweet, the parents of Ethan Crumbley, who has been accused of killing four and wounding seven in a shooting spree at his high school in Michigan earlier this week, each pleaded not guilty to four charges of involuntary manslaughter, with prosecutors seeking to hold them accountable for allegedly failing to secure the gun their son is accused of using and allegedly failing to act on warning signs that he was planning violence. There were 51,000 gun violence incidents in the U.S. between March 2020 and March 2021, up 30% from the preceding year, according to data from the Gun Violence Archive. Of those, almost half were deaths.

The plea in Massie’s tweet to Santa for ammo comes with ammunition in short supply nationwide amid a surge in gun sales during the coronavirus pandemic.

Gun Sales Near Record Levels As U.S. Grapples With Another School Shooting (Forbes)

Kyle Rittenhouse Found Not Guilty On All Counts (Forbes)