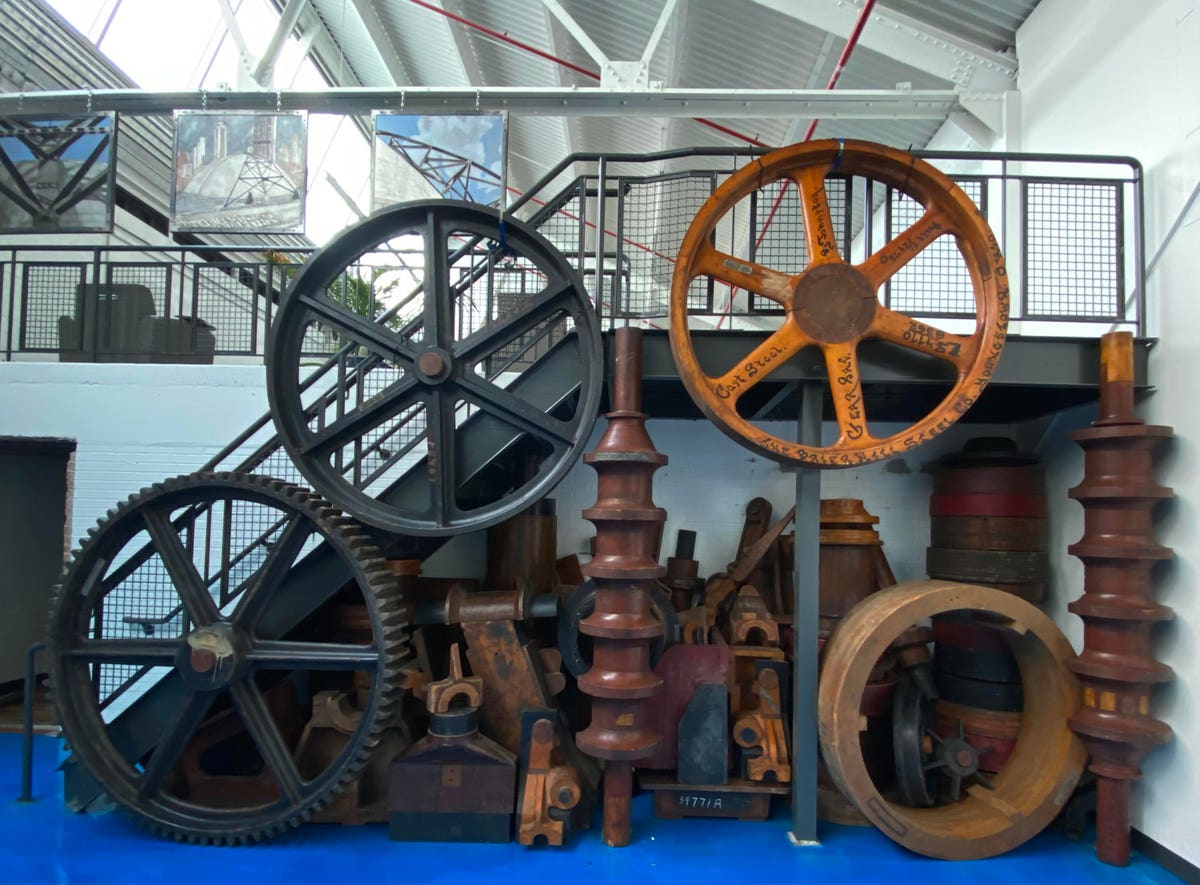 Dust-covered but otherwise pristine and priceless vintage cars are what people usually talk about when you hear of a barn find. This one’s a bit different. It’s about a colossal treasure trove of handcrafted wooden steelmaking patterns used in the sand casting of steel machine parts, collected from a shuttered steel mill in Youngstown, Ohio, and stored away for decades in a nearby barn. Its discovery and a lot of coincidences have come together to result in an upcoming one-night art show, The Patterns of Meaning, on October 14 at Pittsburgh’s Energy Innovation Center, which will highlight these artifacts along with the work of local artist Cory Bonnet. The displays will afterward become a permanent exhibit of this nearly lost aspect of the steel casting industry.

“The paths to get here were not straightforward,” said Bonnet, a Pittsburgh oil painter, preservationist, and owner of New Vision Studio. “Lots of different things had to come together.” One of those was Bonnet’s history of painting nostalgic steelmaking scenes on salvaged and reclaimed building and industrial materials, such as doors, church pews, and old pieces of old factory equipment. “What I want to do with these images is to get people to understand the scope and scale of what these guys in the steel industry do,” he explained.

Those scenes caught the eye of Chip Barletto, a Pennsylvania scrap dealer specializing in scrapping of old steel mills. Since his father owned a heavy equipment business that serviced the steel industry, Barletto’s whole life has been wrapped up in that business. That led him to establish his CB Gallery and Museum in New Castle, Pennsylvania, which highlights the art of steel. Around the time the two met, Barletto had just gotten wind of the barn’s treasures. “A guy visited my museum and saw some of the wood patterns I had in my collection,” he said. “He said he knew of a barn with 6,000 of them. He gave me the owner’s number. I called her up and met with her–the widow of the guy who’d collected them. She said she’d had lots of offers for them from people who wanted to make things out of them like chandeliers, but she didn’t want them destroyed. I told her I had a museum, and she said I could have the whole lot.”

At the same time, Barletto was looking to get out of the lease on the building that housed his museum. Bonnet had just moved into a 10,000 square foot studio in the same building as the Energy Innovation Center, the historic Connelly Trade School structure. “Chip asked me if I knew anyone who had space, and I told him I have plenty of space–you can story your things here for as long as you want,” Bonnet said.

Barletto and Bonnet agreed to partner up to go check out the things in the barn, about which Barletto had told Bonnet, “There might be a few things you can use there.”

Bonnet described their initial visit. “It’s a 40-foot by 80-foot barn. We walked in the downstair, and it was just full of junk. We went up this narrow, dark stairway and got to the top floor. It was stacked floor to ceiling with pristine patterns from the steel mill. Gears, wheels–piles of railcar wheels–and crankshafts. In the basement of the home, there was a whole wall of rolled-up blueprints, thousands of them that correspond to all the patterns we found in the barn. We had to pick our jaws up off the floor when we saw this stuff.”

At first there were concerns, given the vast collection, that there wouldn’t be enough room available in the studio space. That was quickly alleviated. “The owners of the trade school saw the stuff and offered us the whole second floor of the building,” said Bonnet.

Then the hard work began, moving the pieces from the rural barn to the new space in Pittsburgh. With the help of a small crew of ad hoc workers hired from a recovery shelter that Barletto supports, the two hauled ten 26-foot box trucks full of patterns and blueprints to the loading dock of the Energy Innovation Center, then another 100 yards to the second-floor space. While that’s plenty of material for the upcoming show, Bonnet says, “We still have three or four more loads to move.”

The purpose of the effort is multifold. “First, it’s about the preservation of the collection,” explained Bonnet. “Our show on October 14 is the introduction to the collection. We’ve set up the exhibits in a way that at some point, they could travel around the U.S. or internationally for future shows. We’ll be watching how people interact with the pieces and evaluating our options. We’re focused on creating jobs and preserving and restoring the collection. But we’ll also be using the patterns to cast new products in porcelain, glass and, of course, steel, to create sculptures, furniture and, yes, chandeliers. We have a tight-knit group of friends working with us on all of that.”

There are more immediate purposes as well. “We want to re-create the overwhelming feeling we had when we first walked up the stairs of that barn,” Bonnet said. “We also want the exhibit to help highlight the Energy Innovation Center and its training, where they’re setting people up for good-paying jobs in the trades.”

And of course, there’s a lot of value in simply seeing the wooden patterns themselves. “The thing that’s interesting about the patterns is that they’re pristine, even though they’re 100 or 120 years old,” said Barletto. “One guy saw the value in preserving them and put them in his barn, so they’re in almost perfect condition. They help us tie so many important things together from this area and its steel industry history. There’s not much left that’s made that way anymore. The guys who made these things were more than just carpenters–they were like machinists with wood. They had to make those patterns to the exact dimensions of the final parts. It’s just amazing.”