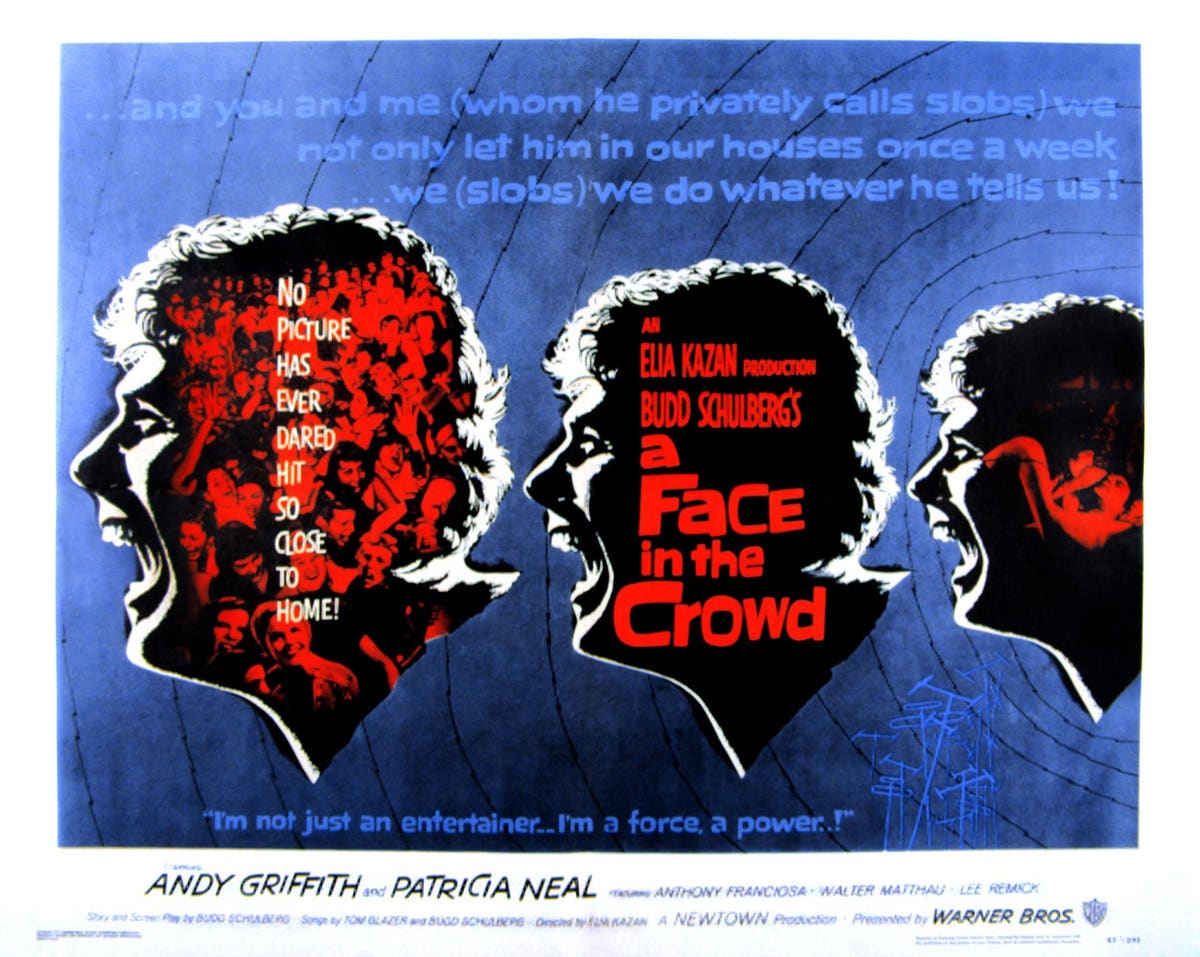 One of the more remarkable and still under-estimated films I have seen in recent years is ‘A Face in the Crowd’, a 1957 production by the two-time Oscar winner Elia Kazan. The film is remarkable in a number of senses, especially for the way in which it prefigures the populist use of media – radio and television for political purposes. Anyone watching Andy Griffiths play Larry Rhodes in the film will think immediately of a recent US president, and given the film is based on a book called ‘Your Arkansas Traveller’ by Budd Schulberg, it’s hard not to think of another President from Arkansas.

‘Face in the Crowd’ highlights not only the umbilical link between populism and the media but also the disastrous end that many populist figures face. Populism is one of the plights of our times, for a range of reasons – the dislocations of globalization, the side effects of immigration, poor policy responses to inequality and the rise of social media are a few.

An excellent analytical resource in this regard comes from three German economists (Manuel Funk, Moritz Schularick and Christoph Trebesch) who have previously carried out excellent work on the connection between financial crises and the rise of populism. The researchers have compiled a database of populism that tracks the rise and fall of the phenomenon over time and its economic and political consequences.

Populism at a high

The most troubling aspect in their research is to show that populism is at its highest point historically – 25% of the countries in their sample (16 of 60) have or recently (in 2018) had populist governments, as compared to only 14% in the 1930’s. Typically, populism is associated with weaker growth or economic volatility – an occurrence that makes sense if we think of the weakness of the Turkish lira, unrest in South Africa and in general, the consistently poor handling of the coronavirus crisis by populist leaders. The German researchers also show that most populist leaders suffer an ‘irregular’ political exit, and will no doubt be adding the events of January 6th in Washington to their database.

The ‘populism peak’ is important in many respects, not least for the way in which populists feed off and exacerbate the issues of the day – the ambivalence of some Tory politicians over racist acts against English football players is one example.

My hunch is that inflation is about to become the latest populist focus. Recent data show that in the US and increasingly in Europe, inflation is awakening after a long slumber. Indeed, many professional economists and investors have never experienced high inflation. In the USA, some inflation measures and price components are the highest that they have been since the 1980’s. The consensus and official view on rising inflation is that it is ‘transitory’ – driven by a burst of coronavirus recovery spending. The risk, across many fronts is that it proves more enduring and thus can cause financial, economic and political pain.

This is where inflation becomes interesting to populists – anything that causes economic pain and social discomfort is populist ammunition. Indeed, there is plenty of evidence to show that inflation is often the offshoot of populist economic policies as the economic history of Latin America shows.

Inflation, if it is here to stay, will become a political issue in at least three ways. The first is housing where the OECD’s housing affordability gauge has gone vertical (i.e. housing is extremely unaffordable), easily surpassing the levels of 2008 (recall the housing crisis). In some countries like Ireland there is a persistent and acute housing crisis, the debate around which is becoming populist – though it should be said that there has been a broad failure to manage this issue from a policy point of view.

The second way in which inflation becomes an issue is where rising real living costs are not matched by wage rises (we may see this in about six months’ time as economic activity and policy normalizes) and ‘the price of things’ becomes a topic of political debate and increasingly, agitation. In the past, and particularly in emerging economies where households spend a large amount of disposable income on food, price rises can lead to unrest (i.e. the Arab Spring).

Third, rising inflation brings the prospect of rising interest rates which will not only make life more complicated for mortgage holders but will ignite a debate on indebtedness, its consequences and remedies. Lurking behind this is the fact that central banks by declaring inflation ‘transitory’ and not yet giving any sense that they are worried about asset price inflation nor the consequences of asset purchases, find themselves snookered. As we have seen with the tussles between Donald Trump and Fed Chair Jay Powell, central banks make easy targets for populists and can be forced into bad policy decisions by them.

So, inflation if and when it materializes, may be political fodder for populists and if it does, this will complicate the policy and political outlook. Populism is difficult to counteract, and often the best remedy for it is the incompetence of populists themselves. What might be the best solution for inflation – I propose that it is populism. As the study I mentioned earlier shows, populists tend to depress growth, and therefore inflation.

Fake AirPods May Cost Apple About $3.2 Billion In 2021 In Just US And Much More