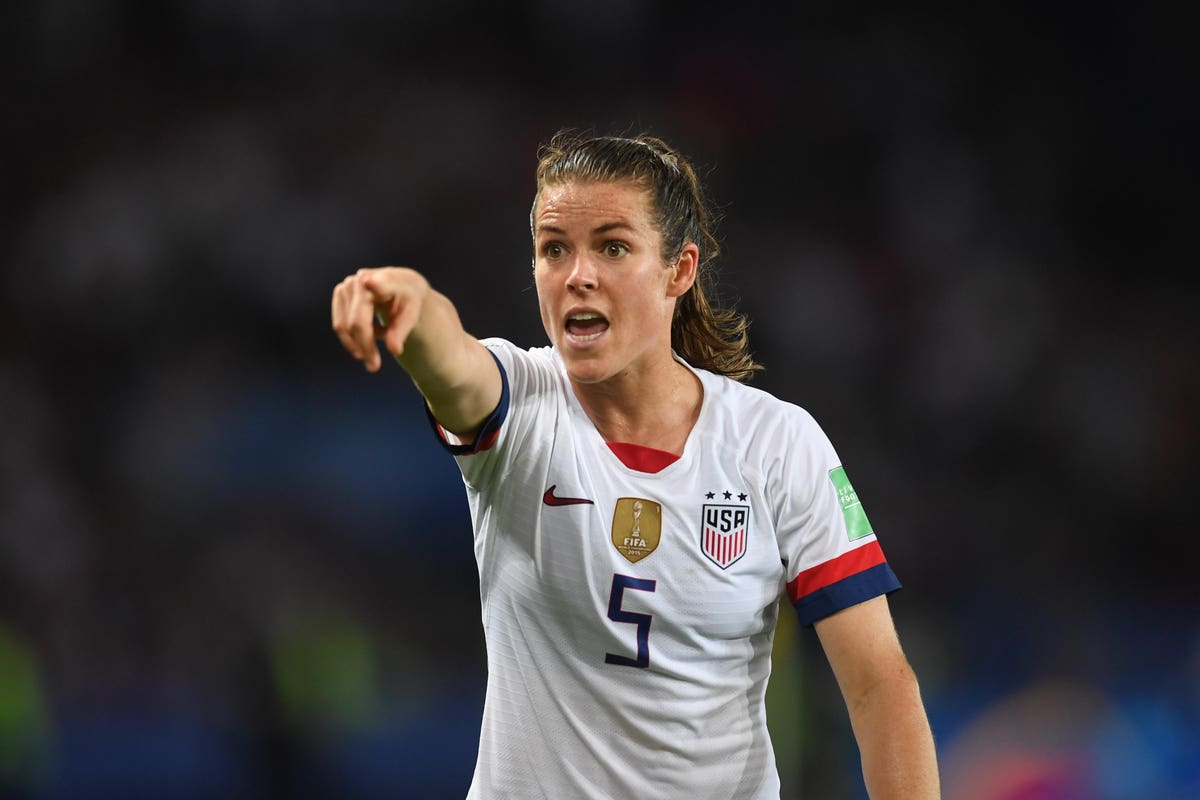 Kelley O’Hara knows that she comes off as a little intense sometimes—maybe even bossy as a defender—and she’s OK with that. She laughed when I mentioned that some of her teammates had previously brought it up.

“Yes, I have been pegged as intense before. I have just always been super competitive,” O’Hara explains.

The Atlanta-born and -bred fullback currently plays with the Washington Spirit in the National Women’s Soccer League (NWSL). O’Hara joined the U.S. Women’s National Soccer Team (USWNT) after playing collegiate ball at Stanford, and initially making her first strides as an international with the United States Under-16 team.

Yet, O’Hara says that being part of two FIFA Women’s World Cup champion teams—in 2015 and 2019—as well as being an Olympic gold medalist, has its own set of demands that have shaped who she is on the field.

“I like to be smiley and happy, and you’ll see me laughing off the field. I’m always down to have a good time. But when I cross the line and the whistle blows, I’m locked in.”

O’Hara says that her intensity and love for soccer crosses over to the playground too. Along with her USWNT teammates Alex Morgan and Crystal Dunn, O’Hara believes that soccer should be much more accessible to kids everywhere in America.

“Traveling with the U.S. National team, we go to different places. You always see in other countries tons of soccer fields. Not even full soccer spaces necessarily, but a lot of small pitches on the side of the road, and kids playing on them.”

O’Hara said that in the United States soccer is sometimes seen as a “purely suburban, upper middle class sport.” In contrast to other countries, O’Hara points out that that urban areas often have an abundance of basketball courts but not soccer spaces.

“The reality is, there is not that high of a barrier to entry when it comes to soccer,” O’Hara said. “All you need a space and a ball, and you can create a goal with whatever you find. The more that we can create soccer spaces for kids to play the sport, the better.”

The trio of players have partnered together to unveil a series of smaller sized soccer fields or public “mini-pitches” that O’Hara says will allow more kids in her hometown of Atlanta to start playing immediately.

In conjunction with the U.S. Soccer Foundation’s Safe Places To Play program, sports drink brand Powerade pledged to build three “Power Pitches” across the country. The first Power Pitch opened in 2019, in Gardena, California with Morgan on hand. Another field will be unveiled in November in Inwood, New York, close to Dunn’s hometown, on southwestern Long Island. And today O’Hara was present for the Atlanta Power Pitch’s unveiling.

“We’re trying to increase access to underserved communities, and put to use under-utilized spaces.” O’Hara added that new space will accommodate unstructured play, as well as programming specifically designed for youth interested in playing soccer.

Prior to the opening event scheduled today in Atlanta, I got to chat with O’Hara via Zoom more about soccer. She spoke about some of her teammates and the USWNT’ successes, as well as her own style of play and her podcast called Just Women’s Sports.

Andy Frye: You’re part of a back four that works quietly behind dynamic offensive players like Alex Morgan, who I think called the USWNT’s defense “bossy.”

Where does your intensity and style of play come from?

Kelley O’Hara: I played forward for a lot of years when I was younger, but playing defense is a different beast. You have so little room to shut off at any point. That lends, I think, to my intensity—or what comes off as being super intense.

I guess we are a bit bossy at times. But we have to be. Our communication as defenders with the midfield and forwards is all about making sure we are as a unit defending the way we need to be.

AF: On top of that, you have a strong central midfielder in Julie Ertz, who is kind of a boss too.

O’Hara: (Laughs.) Yeah, Julie is such a beast. I feel like after every game I’m always in awe of her. She’s always breaking up plays, and always where she needs to be when it comes to the defensive position. And then she’s always the start of the attack. On top of that’ she’s very vocal—and I love that. We need that. And that’s why our team is so good. Because we do have so many of these vocal leaders who are a little controlling, and who are sending messages when they need to be sent.

And at times, Julie and I are barking at each other. But it’s always in the spirit of being successful and wanting to win. And Julie is so much fun to play with.

AF: Speaking of vocal players, what’s it like to play with Morgan and Megan Rapinoe? And see them dominate at World Cup 2019?

O’Hara: I would say that in 2019 Pinoe cemented herself as the set-piece specialist and the penalty kick guru. So, it was great to know that each time we got a PK, we would have a goal, because she never misses. Throughout the Wold Cup, she just had ice in her veins, and she’s so lethal. I’ve never seen another player up close like that be so good at something time and again.

And obviously, Alex has been so good for so long. It feels like Alex Morgan is a secret weapon—but it’s not a secret. When you have these players that are so good in front of you, it’s just such a comforting feeling.

In general, everyone on that 2019 team did their job and then some, and that’s what it takes to win.

AF: Since the last World Cup you started hosting the Just Women’s Sports podcast. Talk about that.

O’Hara: I definitely prepare for each guest. I don’t want anyone to think I show up winging it. I like to highlight each athlete, their careers and each athlete’s journey. But when it comes to the actual conversations, it’s just feeling out what they want to talk about.

The whole purpose of the podcast is the give these athletes a platform to talk about their beginning (and) where they are now. For me, it’s just chatting with another athlete. It’s fun. And I always feel like I leave learning something, feeling inspired and thinking, wow, I can’t believe I just got to talk with that person.

AF: The Atlanta Braves are in the World Series. Are you watching?

O’Hara: Yeah, I’m stoked—super excited. I’d say the Braves are the one Atlanta team—along with Atlanta United—that I follow closely. I’ve watched and enjoyed Braves games since I was in high school. We would buy the $5 tickets and sit up in the nosebleeds.

I’m really excited for them, and I know (Braves shortstop) Dansby Swanson, since he and (USWNT teammate) Mallory Pugh are together. So, it’s fun to watch somebody you know so close shine so brightly. And on top of that, the Braves are bringing so much joy to the city.