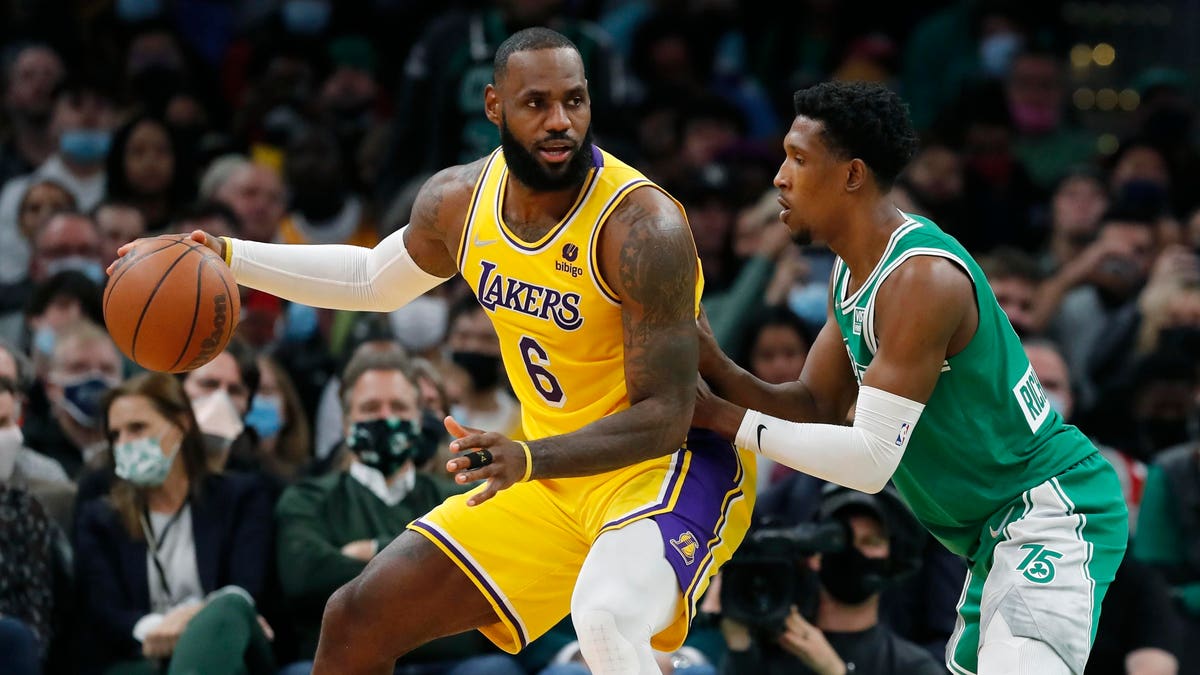 It’s definitely not what the franchise envisioned when they acquired Russell Westbrook in a mega trade that saw the Lakers part ways with three key rotation players — including two holdovers from the 2020 title squad — in Kentavious Caldwell-Pope, Kyle Kuzma and Montrezl Harrell.

The Lakers made the move with the intention of quickly returning to contender status after a disappointing title defense during the 2020-21 season that saw them bow out of the first round.

The franchise took the risk of acquiring an enigmatic superstar in Westbrook — triple-doubles, $44 million salary and inefficiency included — and surrounded the Lakers’ core three including LeBron James and Anthony Davis with a bunch of over-the-hill, minimum salary players.

The decision to take on this new identity — an identity that has yet to actually be established through the first month of the season — was at the expense of the stifling defensive team play that won them the championship in the first place.

James finally made his return after an eight-game absence due to an abdominal injury on Friday night versus the Boston Celtics. And for one half, all looked fine in Laker land.

The Lakers held a 61-60 halftime lead over the Celtics. James had scored 13 points while Davis contributed 14 points and looked involved in the offense.

And then it happened — again.

The Lakers had a terrible third quarter as they were outscored 33-21 by the Celtics. They eventually lost by a final score of 130-108.

“We damn sure need to play better, no matter who is in the lineup,” said James following the game. “We have our system and we need to obviously fast-track it and get better with it so we can play, no matter who is out on the floor, we can play at a high level. … There’s no level of panic. But there should be some sense of urgency anytime we take the floor.”

It’s become a common theme in the early part of this season for the Lakers to simply be outplayed when they have to come out of the tunnel after halftime.

Entering this game, Los Angeles had been outscored by 80 points in third quarters this season while allowing an average of 31.1 points per game in the period.

It’s a large reason why no halftime lead feels safe when it comes to this incarnation of the Lakers.

The defense continues to be a major problem — just one of the many ones that the team has.

Outside of the fact that they allowed 130 points to a Celtics squad that is the definition of a middle-of-the-pack offensive team (13th in points per game, 16th in offensive rating), the Lakers are just simply bad.

This year’s squad ranks third-to-last in points allowed per game. Keep in mind that the 2019-20 team ranked fourth in the league and last year’s team ranked second.

Outside of the glaring issues on the defensive end — something that won’t be fixed with no real anchor on the squad and a bunch of 30-something-year-old castoffs playing key rotation minutes —the offense just has no identity.

The Lakers rank second in the league in pace, yet rank 25th in offensive rating, eighth in fast-break points and 15th in points per possession in transition.

In case you were wondering, that was supposed to be one of Westbrook’s strengths that he brought to the team.

The Lakers don’t have an identity. Head coach Frank Vogel is so flustered with what rotations he should utilize, it’s actually making the Lakers even worse than what they really are — and they’re not very good in the first place.

This is a roster that was largely put together as a result of the massive salary that Westbrook commands. Due to his $44 million salary combined with James and Davis’ salaries of $77 million, the Lakers could only afford to fill out the remainder of their roster with minimum-salary players.

The Lakers have 10 players on minimum salaries, all of whom were signed as a result of the Westbrook deal.

Westbrook hasn’t brought anything productive to the Lakers. Has stubborn as he is, he’s clearly at least paying attention to the criticism about his reputation as a ball-dominant, inefficient shooter.

There hasn’t been a single game that Westbrook has led the team in scoring this season. One would think that Westbrook would carry the scoring lead in the eight games James was sidelined — when the team went 3-5 — but that wasn’t the case.

Instead, Westbrook is still trying to uncomfortably fit in on a Lakers offense while playing an unfamiliar less-than-aggressive style. In other words, he’s desperately trying to fit in as a third wheel behind James and Davis.

The Lakers don’t have a choice. They’ll have to play out the remainder of this season and potentially next season — Westbrook holds a player option for 2022-23 — with this ragtag group of players.

Los Angeles made their bed when they made the decision to acquire Westbrook — the shiny hometown megastar — instead of surrounding a proven championship duo in James and Davis with role players that fit the Lakers’ style of play.

After all, that’s what won them the championship in 2020 and had them off to a strong start in 2020-21 before James and Davis went down due to injuries.

Westbrook was supposed to stabilize this Lakers squad in the event of injuries to the two main stars.

Instead, he’s merely been a glaring reason as to why this team is in a stark decline.

The 2021-22 Lakers won’t be contending for a championship. They might go through some stretches where they look like a competent team and show some of their potential — the potential that made them one of the preseason favorites to win the championship.

But this season will end much the same way the pre-Westbrook era ended — the Lakers clawing just to get into the postseason with a first-round playoff exit all but inevitable.

Put a fork in ‘em, Lakers nation. Close your eyes and hope it doesn’t get too ugly.