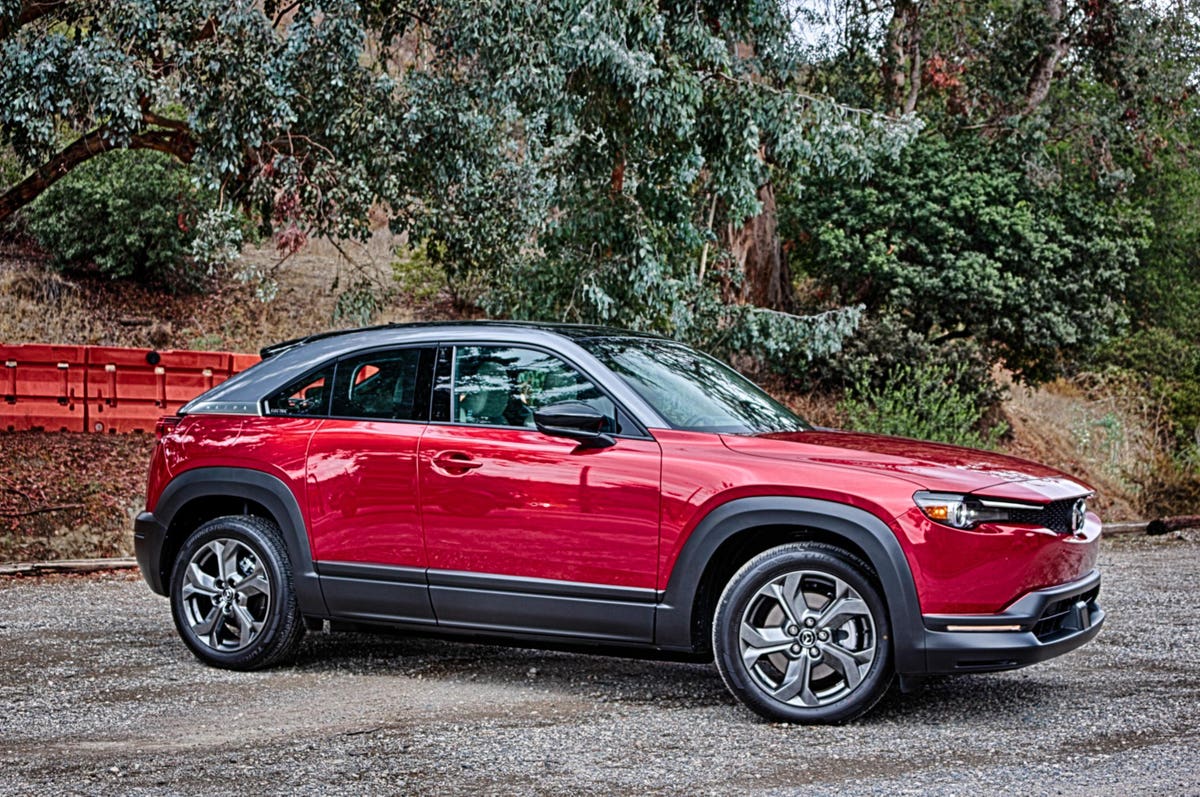 Mazda has always been a carmaker that does things its own way, not necessarily following the crowd. The company’s infatuation with rotary engines (which are returning) and its long-running Miata sports car are two of the best examples. In recent years, Mazda executives have have downplayed the benefits of electric vehicles in many circumstances based on how electricity is generated. Despite that, the brand’s first EV has arrived in the form of the 2022 MX-30.

Let’s be clear about something right up front. Despite Mazda’s protestations to the contrary, the MX-30 is a compliance car. It would almost certainly not exist in this form were it not for regulations in several regions that effectively mandate the sale of zero emission vehicles. Mazda has a plan for a dedicated EV platform coming around mid-decade that will likely be much more appealing to a mass audience. The MX-30 isn’t that. It’s going on sale, because Mazda must sell a certain percentage of its vehicles in California with a plug.

That said, just because it was created to comply with the law, that doesn’t make it a bad car. Compared to some of the compliance cars that were launched in the early 2010s to meet the ZEV mandate rules, it’s actually quite good and mostly very useful. The Ford Focus Electric and Fiat 500e could barely cover 70 miles when new and had severely compromised packaging as their makers tried to stuff in battery wherever they could.

The MX-30 shares its platform with the CX-30 which is arguably the best compact crossover in its class with the excellent driving dynamics expected of a Mazda and an interior that feels more premium than any competition at a similar price. While it has the same footprint as the CX-30, the MX-30 looks quite different. Instead of the traditional four-door form factor, the electric crossover goes for a design with no B-pillar, using rear-hinged half-doors for access to the rear seat, similar to the the departed RX-8 sports car and BMW’s i3.

The MX-30 has a more sloped rear roofline, almost going for the dreaded SUV coupe look. None of the rest of the sheetmetal is shared either. Mazda has incorporated an interesting multi-tone look with different roof colors and a metallic band separating the roof from the lower body. It’s a unique look that doesn’t come across as weird for the sake of being different although it’s not quite as sophisticated looking as other recent Mazdas.

The MX-30 retains the long hood proportions of other recent Mazdas rather than going for a stubbier front end like the VW ID.4. Despite that room, Mazda hasn’t bothered with a front trunk. The motor and power electronics occupy that space and other powertrain variants are also coming for a variety of markets where the charging infrastructure support isn’t yet sufficient for a full battery EV. Like the original Hyundai Ioniq, Mazda is doing hybrid and plug-in hybrid versions of the MX-30. There is also a series hybrid range extended version that will use a new version of the rotary engine to drive a generator without being connected to the wheels.

For now though, there is only the battery and most people will likely be disappointed to learn that it only offers 100 miles of range in late 2021. Like Hyundai, Honda and BMW before it, Mazda is making the case that most people don’t need much more range than that, and in many cases they would be right. 75% of people drive less than 40 miles a day and only occasionally take longer trips. By buying cars with more range, they are buying too much battery and using unnecessary resources.

I’ve long argued that most people could get by with EV commuter vehicles that have less range and then occasionally rent something larger when needed for a road trip. Mazda is building that in with the MX-30. For the first three years, MX-30 owners will get ten days a year of complimentary rentals of any other Mazda from their local dealer when needed. Toyota does something similar with the fuel cell Mirai since there are no hydrogen stations outside of California. For a commuter, this can be a great option.

The interior is quite different with a focus on sustainable materials. Fabrics contain 20% recycled fibers including the felt-like material across the top of the door panels and the use of recycled PET plastics throughout. The 20% limitation on recycled fibers is due to the fact that each time fabrics are recycled, the fibers get chopped up and shortened, reducing durability. Mixing recycled and virgin materials retains the durability needed for an automotive application.

A century ago, before Mazda started making vehicles, it was in the cork business. Cork is very sustainable since the bark can be peeled off cork trees and it grows back. Cork is used to line some of the storage areas in the center console, giving the cabin a unique look and feel.

While it may not look like other Mazdas, on the road, the MX-30 absolutely drives like one. It features the same crisp handling, good steering feel and general fun to drive character of the CX-30. Like all electrified vehicles, Mazda takes advantage of regenerative braking to put energy back in the battery, but unlike the others, they have opted not to go with a one-pedal driving mode. They instead preferred to keep something more akin to traditional vehicles. However, the driver can use the steering wheel paddles normally used for manual shifting to control the amount of regenerative braking, much as they might down shift to get some extra deceleration from engine braking.

In designing a brake system for electrified vehicles, blending the regenerative and friction braking is one of the most challenging aspects to achieve smooth consistent driving. Mazda put a lot of effort into the brake by wire system of the MX-30. Rather than pushing against hydraulic fluid, the brake pedal in the MX-30 only pushes against a spring with the motion translated into a mix of friction and regeneration. Like other Mazdas, the MX-30 team has retained a fairly firm pedal feel and I never felt any transition or blending during my drive time.

The MX-30’s 3,655 curb weight is roughly 300-pounds more than the CX-30, and the electric motor produces 143-hp compared to 186 for the naturally aspirated CX-30. However, the instant response of the 200 lb-ft of torque from the electric motor makes the MX-30 feel similar off the line to its gas-powered counterparts.

One unique aspect of the MX-30s dynamic behavior is the electric g-vectoring control (e-GVC) that is enabled by the electric propulsion. On other Mazdas, GVC can momentarily cut engine torque slightly as the vehicle is turning into a corner if the driver still has their foot on the accelerator pedal. This causes a slight weight transfer to the front wheels which helps them get more grip for turning, similar to a technique known as trail braking. However, if the vehicle is coasting, engine torque can’t be reduced. However, with the electric motor, some negative torque can be generated to create that weight transfer and remove turn-in response. These torque adjustments can’t really be felt by the driver directly, but it’s definitely noticeable from the improved handling in corners.

Aside from driving range, one area where the MX-30 lags is in rear seat leg room. The rear seat has been repositioned forward to accommodate the battery below it, cutting rear leg space by six-inches compared to the CX-30. The 21 cubic feet of cargo volume behind the seats remains ample and comparable to the CX-30

Yes, the MX-30 is lacking in range compared to current state of the art EVs. But for the way most people actually use their vehicles, it has adequate range, at least in warm weather states not affected by winter. With Mazda’s free rental policy, the MX-30 could be a very viable option for many drivers and for those that like the way Mazda’s feel on the road, they will be quite at home in this car. With a starting price of $33,470 before incentives, it’s also reasonably affordable. In California, you can get this for a net price in the low $20K range. It may be a compliance car, but it’s a fun one to drive might be worth a look if you can’t swing the payments on a Tesla.