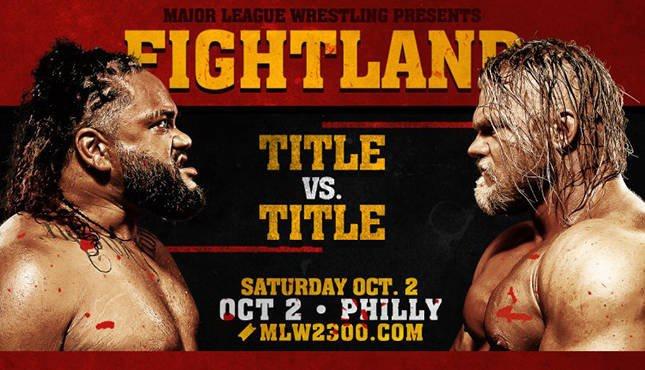 Given what’s at stake in a clash between two dominant champions, it can be argued that this is the biggest match in MLW history, which is certainly the case for Hammerstone.

“Yes, I definitely do [feel this is the biggest match of my life],” said Hammerstone in an exclusive interview. Hammerstone earned his world title match by winning MLW Battle Riot III.

“After over a decade in this business, I’m finally getting an opportunity at the world title. Not only that MLW is providing a huge platform and the buzz is unreal. This will without a doubt be the most eyes on me.”

MLW’s platform has grown exponentially over the years as the rising promotion recently inked a deal with Vice TV. Vice TV has found success in the pro wrestling genre through Dark Side of the Ring, which has drawn the highest ratings in the channel’s history. MLW on Vice TV premiered this past April, and the Saturday-morning (noon EST) showcase features archival footage of MLW matches.

With MLW making inroads with a cutting-edge network like Vice TV, budding stars like Hammerstone are now seeing years of hard work on the independent circuit—including trials and tribulations with WWE—pay off as one of the premier stars of Major League Wrestling. Hammerstone’s secret isn’t really that much of a secret, but more so a story of perseverance. Hammerstone credits his stint in bodybuilding with building the discipline needed to contend with the long, arduous road of becoming a top star in professional wrestling.

“Bodybuilding translates in one way above all else. Discipline,” said Hammerstone.

“To be successful in bodybuilding it takes a whole new level of discipline. You have to get comfortable with some suffering and that has allowed me to push myself when training for wrestling even harder.”

Few have had a longer road to professional wrestling than Matt Cross, who has his eyes on the MLW Opera Cup as he prepares to face Calvin Tankman in the opening round. The Opera Cup is caked in prestige within the industry, with lineage dating back over 100 years. Prior to its reboot in 2019, The Opera Cup was last held in 1948 where its winner was the legendary Stu Hart.

Cross very well may be the most well-traveled pro wrestler in the world. Cross defeated MJF in the first match of the historic AEW precursor All In, has wrestled in 28 countries and currently holds championships in four of them. His journey has allowed him to gain a perspective on the world of professional wrestling that few others, if any, share.

“My accomplishments have been without equal, so fantastic, and so worldly, that they transcend all of professional wrestling’s traditional, literal, and figurative boundaries,” said Cross in an exclusive interview.

“By and large, most people lack a context to even understand them. I’m currently holding titles in Switzerland, Germany, France, and the United States. I’m sure a passionate wrestling fan can help shed light on this, but I’m curious how many times, if ever, something like that has been done. Free of any one bubble, I have an unclouded, unmatched view of our global wrestling community. I don’t think even my hero’s main-evented in Moscow, represented the United States in tournaments in Colombia, wrestled in Sudan, or Egypt.”

Fatu was ranked No. 31 on the 2021 PWI 500, and has held MLW’s top title for 819 days and counting. Not to be outdone, Fatu’s Fightland challenger Hammerstone (No. 54 on the PWI 500) has held the National Openweight Championship for a whopping 854 days. Something has to give. As the first and only National Openweight champion, Hammerstone intends to continue his historic reign.

“Fatu has without a doubt been a great champion,” said Hammerstone.

“But I don’t want to just be a great champion, I want to be a great ambassador for MLW. I want to take that championship around the world and continue to build it as best I can, and I believe I’m the man for that job.”