Paxton Or Ben? The Men Of ‘Never Have I Ever’ Weigh In On Season 2 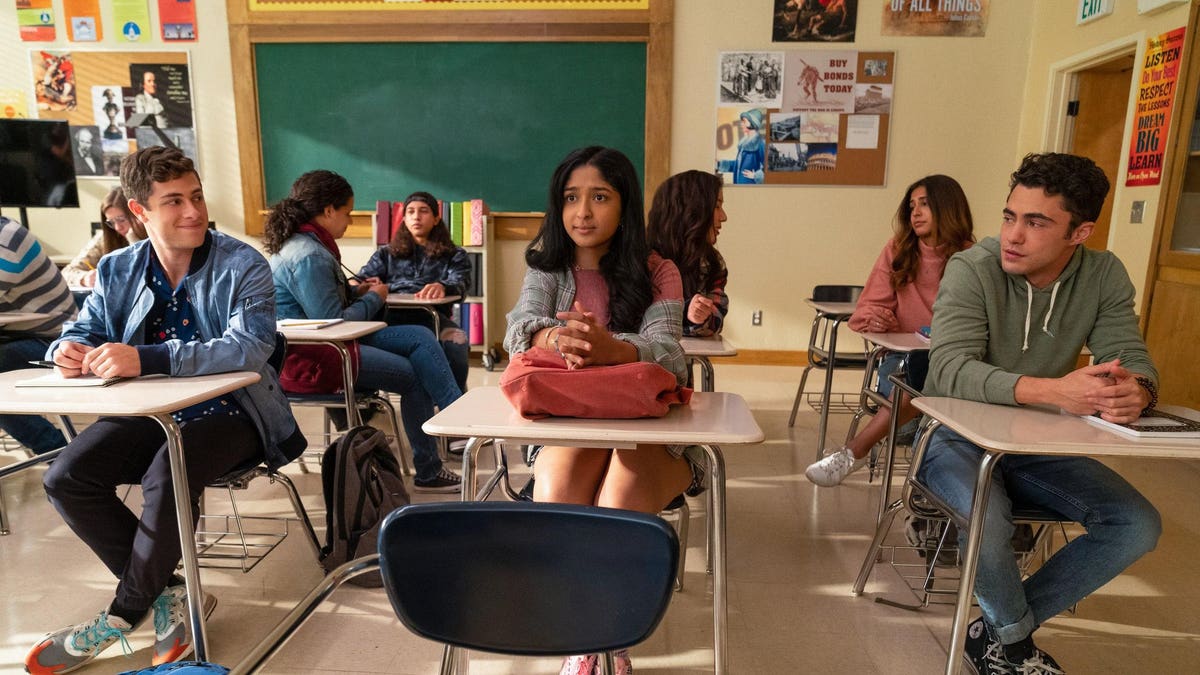 The second season of Netflix’s breakout comedy Never Have I Ever drops on Friday, and the big question going into it is who will Devi (Maitreyi Ramakrishnan) choose, nerdy-but-lovable former nemesis Ben Gross or hot-then-cold popular jock Paxton Hall-Yoshida?

Ask Jaren Lewison, who plays Ben on, or Darren Barnet, who plays Paxton, and they initially side-step the question. Artfully, of course.

“Honestly, and this is something Maitreyi has said before, I think first and foremost, Devi should end up with herself,” Barnet says. “She’s searching for something in both guys that she could maybe find in herself.”

“I always appreciate the team Devi answers,” Lewison echoes. “In order to enter into a relationship, you’ve got to have some self-love and be comfortable with yourself and ready to open up that part of yourself for a prospective partner.”

But if pushed, both actors will make a case for their characters.

“With Paxton, he’s always been there for her, he’s lending a healing hand when no one else around her did, even her close friends,” Barnet says. “And Ben, bottom line, if you go brass tacks on it, he’s technically a cheater. He had a girlfriend when he kissed her at the end of season one. And they say once a cheater, always a cheater.”

Counters Lewison, “Ben is a great choice because he does connect with Devi on a deeper level. You see that in their conversations and the substance of their solo scenes. They aren’t afraid of talking about difficult topics like grief. Devi is dealing with a tough situation where her father died young, and Ben’s having some family trouble.”

Both actors refuse to give spoilers for the highly anticipated premiere. Any way Devi decides—the brain, the hottie or the classic Kelly Taylor “I Choose Me” approach—the show is likely to draw big numbers once again.

Ever’s first season became a hit amidst the pandemic lockdown last year, when people were spending more time inside and TV usage levels rose. The show, created by Mindy Kaling and Lang Fisher, follows an Indian-American teenager grappling with adolescence as well as the unexpected death of her father.

Lewison and Barnet say their characters exhibited character growth in season one that continues in season two. Lewison notes the Ben-focused episode in season one that helped explain his drive at school and desire for connection. “He’s lonely, which shows why he does a lot of the things he does,” Lewison says.

The actor, a student at USC who balances shooting with a full-time class schedule, says the character development in season two also appealed to him as a psychology major. “It’s interesting to peel back the layers of a character and then add on to them,” he says. “Maitreyi and I are super close in real life, and so we talk about our characters, their motivations and the objectives we want to get out of our scenes.”

Real-life influences also impacted Barnet’s role. Before season one started, Lang and Kaling made a major change to Paxton that wasn’t in the original script. Barnet was speaking Japanese on set, which someone overheard and mentioned to the show’s co-creators and executive producers.

“They asked me, are you part Japanese? Which I am. So they decided to make the character half Japanese, that’s where the Yoshida came from in his last name. This season we’re going to see a lot more of a deeper look into his home life with his parents and a deeper dive into the culture. It was a lot of fun,” Barnet says.