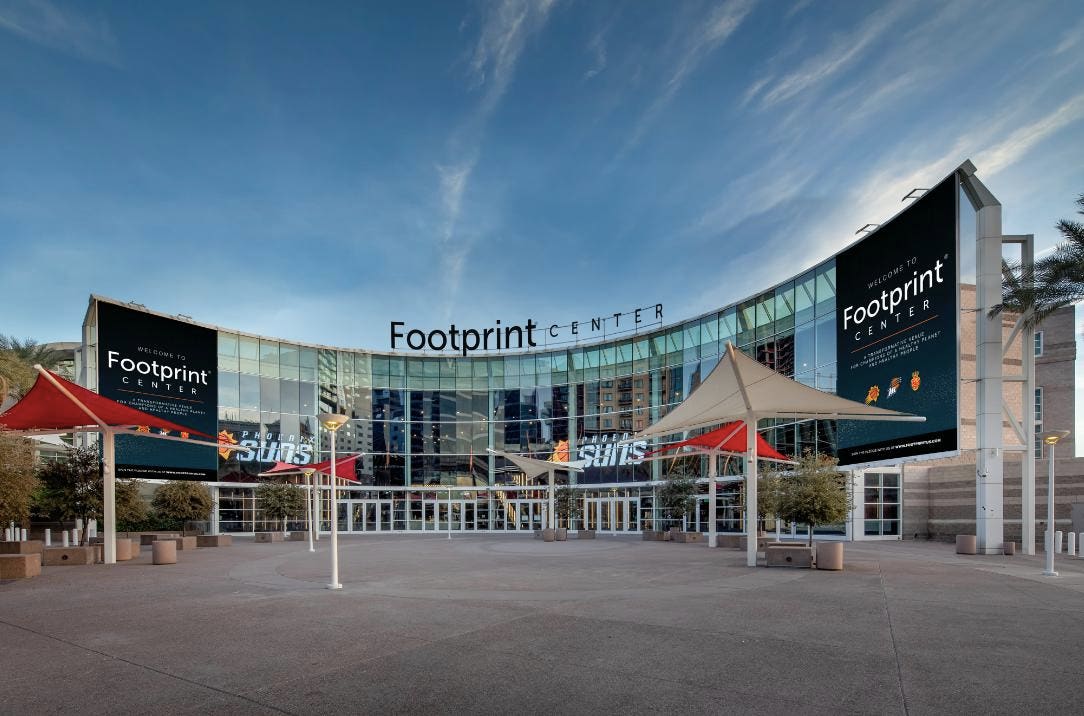 The Phoenix Suns and plant-based food-packaging company Footprint agreed to a new long-term naming rights deal for the Suns’ downtown arena, now known as the Footprint Center. But the agreement was for far more than tossing the Footprint name on the building.

“What we are creating is a living innovation lab for Footprint,” says Robert Sarver, Suns managing partner. “They are going to help us eliminate single-use plastic within our arena and we are going to help them promote their brand so that over time they will be a household name.”

The venue, which underwent a major overhaul before the 2020-21 NBA season, didn’t have a corporate sponsor attached to it for the past season. The announcement of the new Footprint Center name changes that and gives Sarver a “purpose for the name on the building.”

“The Suns are our customer,” says Troy Swope, Footprint co-founder and CEO. “We are there to enhance their brand. We will be giving them something the consumer is looking for.”

Footprint, based in Arizona, was founded in 2014 by former Intel engineers Swope and Yoke Chung after realizing that plastic was polluting components within Intel’s semiconductors. Following the investigating of plastic’s contamination of food through packaging, Footprint was founded as a materials science company with former Intel scientists and engineers to create a healthier planet by “getting plastic away from food” through the plant-based fiber technology that crafts biodegradable, compostable and recyclable food packaging.

Sarver says that as they move to eliminate single-use and multiple-use plastic within the venue as part of a carbon-neutral pledge, the two groups can partner to bring new products to consumers. “We are feeding a lot of people in our arena,” Sarver says. “One of our first goals will be to eliminate the use of plastics in our arena.”

Footprint Center will allow the company, now with more than 1,500 employees, to bring products to real-world tests in the arena. “This partnership gives us an unbelievable partner in this innovation,” Swope says. “We are going to have to fail and try and experiment. It is a great area to try a plant-based water bottle to see how people like it. How is the mouth feel? How does it perform in an ice chest? This gives us opportunity to get real-time feedback. The amazing thing about this partnership is it is a lab. It is going to transform the way sports and entertainment is done from a waste perspective. You have to have a place where you can fail, a place where you can learn.”

MORE: Phoenix Suns Unveil A Practice Facility Using Technology In A Way No NBA Team Has Before

The first change fans will see will be plates, packaging, silverware, coolers and other single-use plastic items that can be replaced with Footprint’s products. Swope says Footprint will have a plant-based water bottle for the arena, but it could take a year or so “to make sure it is right.” While working with all the differing partners and stakeholders, Swope says that within a couple of years they hope to make Footprint Center free of plastic waste.

The Suns were one of the first arenas to move to solar-powered energy over a decade ago and Sarver says that they wanted to stay on the sustainable path with the Footprint partnership, something he believes many fans will see as a positive addition to the off-court meaning of the team. “We want a partner that is equally committed,” he says. “Is it a product we can stand behind, a product we believe in and can make a difference to our community? They check all the boxes for us.”

Being an Arizona-based company, Sarver says he’s spent ample time at the company headquarters and learning about the process, being impressed not only with the development but with the people. “All of it is done internally, created and invented internally,” Sarver says. “It is fascinating to watch, and you will see more and more of it.”

Footprint has created all their own technology and equipment for crafting biodegradable technologies for food product. With over 3,000 invention disclosures, Footprint has already connected with major players in the food industry. The Suns partnership will give them connections to even more potential partners by showcasing products within the arena.

“We are going to transform the way stadiums and events are handled relative to materials and waste,” Swope says. “The fact that the Suns gave us this freedom, it was really a no-brainer (to enter into a naming rights deal). It is nothing like stadium rights, it is a partnership in innovation.”