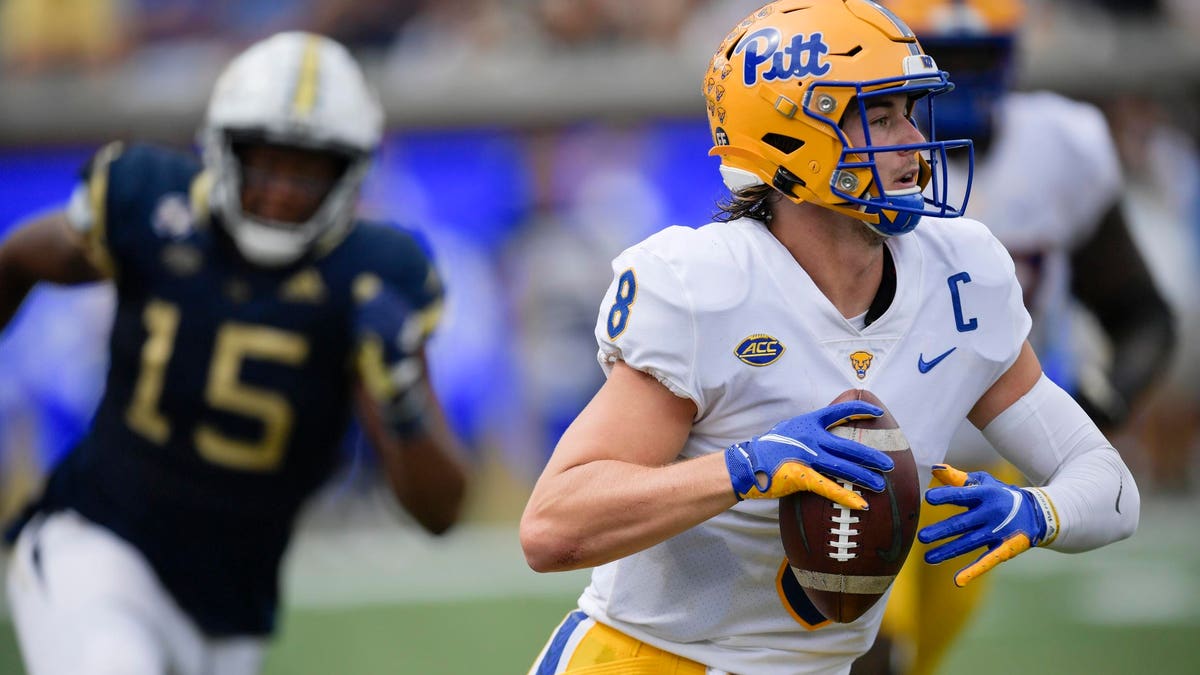 Watching Pitt’s postgame highlight packages on the athletic department’s web site through the first five weeks of this season is like watching an exhibition on how to play quarterback at the collegiate level.

Kenny Pickett has been that good in 2021.

While there was never any question about Pickett’s level of talent and athleticism, the videos reveal how he has grown into a top-shelf quarterback, including his patience while looking down field and connecting on passes he previously may have had trouble with.

Indeed, Pickett’s poise and accuracy, not to mention his ability to spread it around, have stood out so far this season.

So did coach Pat Narduzzi’s comments following the Panthers’ 52-21 dismantling of Georgia Tech in Atlanta last week. Narduzzi brought up the “H” word when talking about his quarterback’s effort.

“He should be a Heisman candidate,” he said of Pickett, who had just thrown for 389 yards and four touchdowns in a turnover-free performance. “It is just what he is right now. He is so smooth, so calm.”

Pickett, who left his Jersey Shore high school a semester early to arrive at Pitt in the winter of 2017, is in his fifth season with the Panthers and fourth as a starter. The 6-foot-3 and 220-pound signal caller announced in mid-December that he would return for a final season.

“He has made himself a lot of money coming back, I can tell you that,” said Narduzzi.

Though the NFL draft is about seven months away, there is no questioning the fact Pickett is putting together a head-turning type of season to this point.

True, it is only five weeks and the non-conference slate was, for the most part, terribly underwhelming. However, Pickett is second nationally in pass efficiency thanks in no small part to 19 touchdown passes (also second) and only one interception. His current streak of three straight games with at least four TD tosses is the longest by an ACC quarterback since Russell Wilson also had a trio of such games with North Carolina State in 2009.

Pickett has also thrown for 1,731 yards, which is good for fourth nationally, and he is seventh in having completed 72 percent of his passes.

He has been making his way up the school’s record book. In fact, this season Pickett has passed Tyler Palko, Tino Sunseri and Dan Marino on Pitt’s all-time passing yardage leaders list. With 10,374, he trails only Alex Van Pelt, who threw for 11,267 yards from 1989-92.

“He is a smart football player,” said Narduzzi. “It takes time to get to where you want to be. He has put the work in and he deserves what he is getting right now.”

Keeping the 4-1 Panthers from being undefeated and likely ranked, as well as earning Pickett more national attention, was a 44-41 setback to visiting Western Michigan on September 18.

It was the type of stub-your-toe loss that all too often has plagued a Pitt program that has won no more than eight and no less than six games in 10 of the last 11 years. It adds up to 75-66 since the start of 2010 and a host of mid- to lower-level bowls.

For every exhilarating win, such as against No. 2 and visiting Miami on Thanksgiving weekend 2017, there have been mind-boggling losses to Akron (2014) and Youngstown State (2012), for goodness sake. That is how things have gone at Pitt.

Even with the loss to Western Michigan maybe — maybe — this season will be different. Pickett is giving Pitt fans ample reason to come out to Heinz Field and fans and pundits around the nation reason to pay attention to his weekly performances.

There is no reason to think Pickett will not continue to pile up the numbers. Of the Panthers’ seven remaining opponents, all ACC clashes, five have a pass efficiency defense rating in the bottom half among 130 FBS teams.

First things first, though. Following a bye this week, it is off to Blacksburg to face Virginia Tech next Saturday afternoon. Clemson visits Heinz Field in two weeks in the Panthers’ first home conference tilt. The Hokies and the Tigers are the two teams remaining on Pitt’s schedule that are not in the nation’s bottom half when it comes to defending the pass.

Even with Virginia Tech’s ups and downs and Clemson dropping out of the top 25 for the first time in seven years, these games will be critical to Pitt’s and Pickett’s season.

In other words, the opportunity is there for both team and individual to do something special. If things go well the next couple of games, Narduzzi may be mentioning “Heisman” quite a bit more when talking about his quarterback.