Prius Of The Skies? Cessna To Offer Hybrid Version Of Workhorse Caravan Utility Plane In Tie-Up With Surf Air 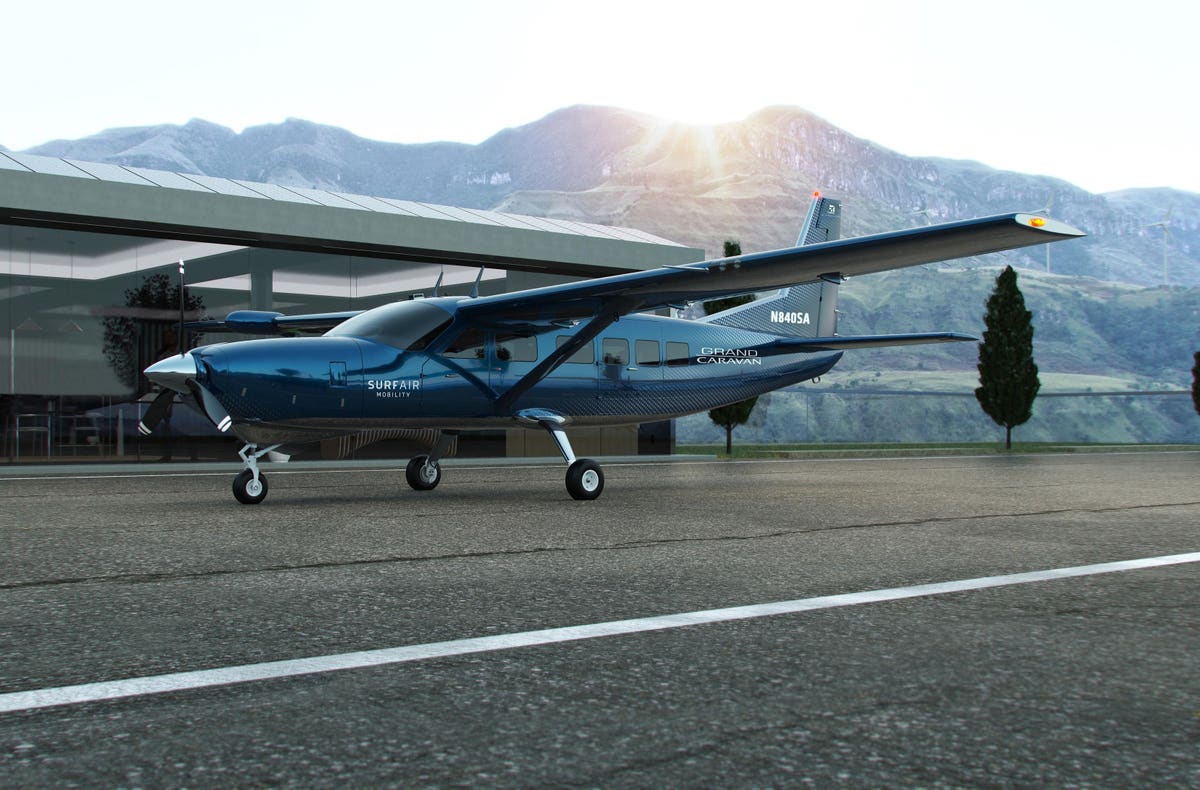 Cessna is looking to give buyers and existing owners of its venerable Caravan the option to go green without a hit to performance by replacing the popular utility plane’s turboprop engine with a hybrid electric propulsion system that will be supplied by Surf Air Mobility, in what could be the first deployment of hybrid technology by an established aircraft maker.

Surf Air, a California-based regional air travel provider that struck a deal in February to buy the hybrid aircraft engine developer Ampaire, says that the technology will cut the Grand Caravan EX’s emissions and operating costs by up to 25%, while offering range of 1,000 nautical miles – roughly the same as the standard version. Surf Air is aiming to win approval from the Federal Aviation Administration to equip Caravans with a hybrid propulsion system by 2024.

Surf Air is also aiming to be the first major user of hybrid Caravans, placing an order with Textron-owned Cessna for 100 of the Grand Caravan EX configured to carry nine passengers, with an option for 50 more. Surf Air CEO Sudhin Shahani believes the hybrid version’s lower operating costs will enable him to expand his business, which includes scheduled and on-demand passenger service between small airports, making it more price-competitive to driving or flying on commercial airliners on trips between 50 and 500 miles.

“The Cessna Grand Caravan EX is one of the most adaptable and prolific aircraft in flight today,” Shahani said in a statement. “We believe electrifying [it] is the most significant step that can be made toward reduced emission flying with the quickest path to market.”

Scores of companies are working to give air travel a green makeover by replacing fossil fuel-powered engines with electric ones, but the poor energy density of the current generation of batteries compared to aviation fuel limits their usefulness in the near term. Slovenia’s Pipistrel is the first aircraft maker to have won safety approval for an all-electric airplane — the European Union Aviation Safety Agency granted it type certification last year for a tiny two-seat pilot training aircraft. The plane’s maximum flight time: 50 minutes plus reserves. Harbour Air is hoping to win approval from Canadian authorities to launch service in 2022 in the Vancouver area with six-passenger seaplanes retrofitted with battery-powered electric engines from MagniX of Redmond, Wash., which are expected to have enough range to work on the 70% of Harbour’s routes that are 30 minutes are less.

Hybrid propulsion systems may not offer the same degree of environmental benefits as fully electric aircraft – the series hybrid Ampaire cofounder Kevin Noertker is developing features a jet fuel-fired generator that charges the battery — but Surf Air says that the hybrid Caravan will have a similar sticker price as the standard version powered by Pratt & Whitney’s tried and true PT6A-114A turboprop engine, as well as match its performance and power output of 675 shaft horsepower. And since it won’t require the charging stations that all-electric aircraft will, the hybrid Caravan will be usable at any airport in the U.S. from the start.

Surf Air says it will cost roughly the same for a Caravan owner to retrofit their plane with the hybrid propulsion system as to overhaul a PT6 engine. Cracking that market would be a significant achievement given the Caravan’s ubiquity. A rugged, versatile plane that’s a favorite of cargo haulers like FedEx as well as of small passenger airlines, Cessna has delivered over 2,800 of them since the plane debuted in 1984.

MagniX also has its eyes on the Caravan: it’s flight-tested a model of the plane equipped with a 750-horsepower electric engine, and CEO Roei Ganzarski believes with today’s batteries, an electric Caravan could carry a heavy payload 100 miles, which would make it attractive to some operators.

Surf Air’s hybrid system for the Caravan has yet to be built, but it will be based on a smaller version that Ampaire has flight-tested in a Cessna 337 Skymaster, simulating commercial flights with Mokulele Airlines in the Hawaiian islands in 2020.

Surf Air’s plans carry a few asterisks: its Cessna order is contingent on it lining up financing, and it’s buying Ampaire with $100 million in stock, a currency based on its plan to go public later this year. The company has not clarified whether that will be via a reverse merger with a special acquisition company, a direct listing or a traditional IPO, but Shahani struck a deal for $200 million in funding in August from Luxembourg-based Global Emerging Markets Group that’s contingent on Surf Air going public.