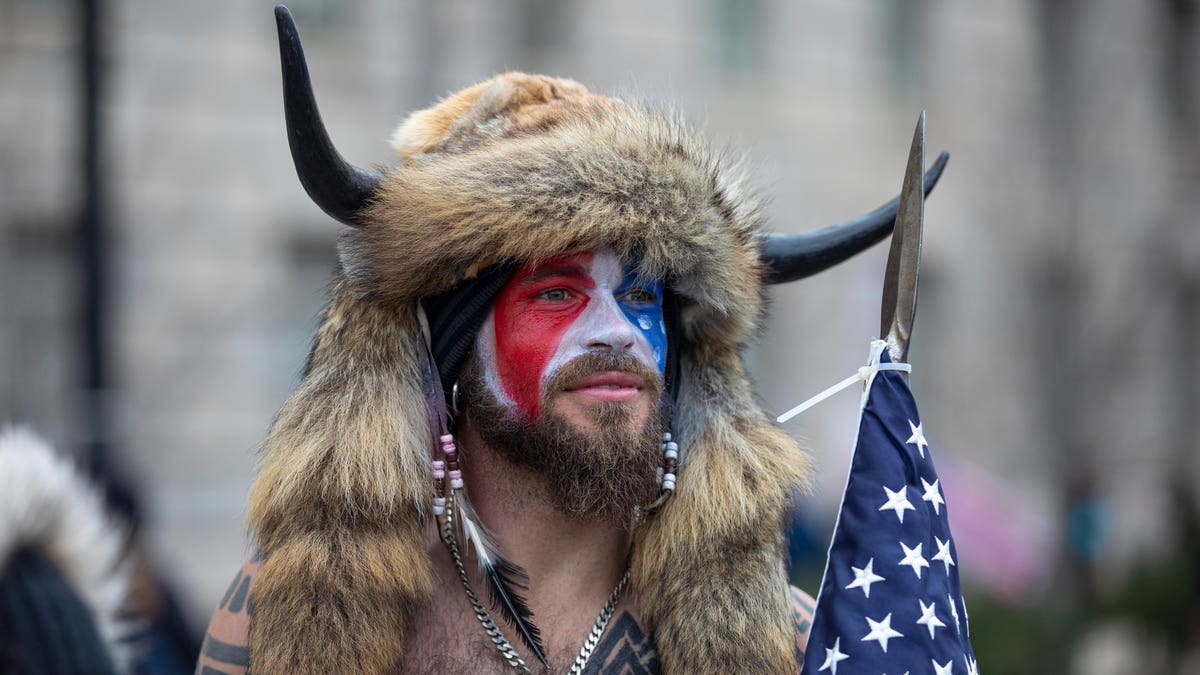 A federal judge sentenced Jacob Chansley — the “QAnon Shaman,” whose face paint and horned helmet made him a standout figure in January’s attack on the U.S. Capitol — to more than three years in prison Wednesday, one of the longest sentences handed down to a Capitol riot defendant.

Lamberth said he believes Chansley is genuinely remorseful, but he couldn’t hand down a smaller sentence because his actions in the Capitol were “horrific.”

Chansley addressed the court before he was sentenced, acknowledging that he was “wrong for entering the Capitol” but isn’t an insurrectionist and will not reoffend.

Prosecutors had asked Lamberth to order 51 months of prison: They argued in a memo last week Chansley was one of the first people to enter the Capitol unlawfully, and he left a note on the Senate’s dais warning “justice is coming.”

The government also called Chansley “the public face of the Capitol riot” and “quite literally, their flagbearer” — a reference to the American flag on a six-foot flagpole that Chansley carried while traversing the Capitol.

Chansley’s attorney Albert Watkins asked the judge to sentence his client to time served, arguing Chansley is nonviolent and remorseful in a memo that compared his “obliviousness” during the Capitol riot to Forrest Gump.

Watkins said Chansley’s months-long stay in jail has worsened his client’s mental health issues, claiming he was diagnosed with “schizotypal personality disorder” while serving in the Navy 15 years ago but was never informed of his diagnosis.

“His actions struck at the roots of our democracy,” prosecutors wrote in their sentencing memo. “When rioters flooded the U.S. Capitol and the defendant took the Senate dais, they accomplished the goal so many could never have imagined—they halted the peaceful transfer of power upon which our democracy is built.”

Chansley’s sentence is tied for the longest imposed on a Capitol breach defendant so far. The Justice Department has arrested and charged over 650 people in connection with the riot, and more than 100 have pleaded guilty so far. A smaller number have already faced sentencing, including a man charged with assaulting police who was also sentenced to 41 months in prison last week.

Shirtless and donning a helmet, Chansley was one of the most recognizable faces in the January 6 attack on the Capitol. Federal authorities arrested and charged Chansley in his home state of Arizona days after the riot. Since then, his case has drawn frequent attention: Watkins publicly suggested former President Donald Trump should pardon Chansley, claiming he “felt like he was answering the call of our president,” and Chansley later told 60 Minutes he felt “wounded” Trump left office without pardoning any Capitol riot defendants. Less than a month after his arrest, Chansley fasted for over a week because one D.C.-area jail didn’t serve organic food, which he says is mandated by his shamanistic religious beliefs (a judge eventually moved him to a new jail due to this dietary request). And Watkins drew criticism when he told news site Talking Points Memo many of the Capitol rioters are “fucking short-bus people” and are “on the goddamn spectrum.” He later claimed to Forbes he used intentionally provocative language to draw attention to Chansley’s mental health needs.