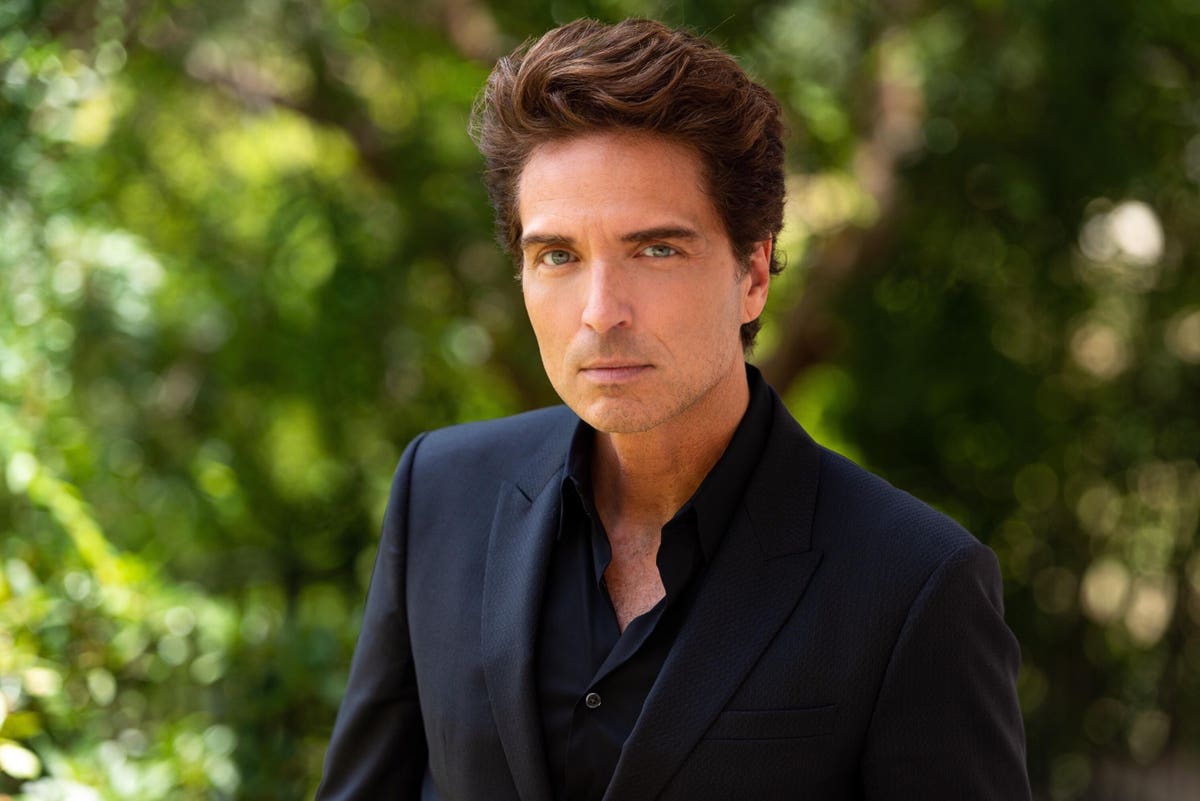 In 1981, Richard Marx was an 18-year-old aspiring musician from Chicago who was in his senior year at high school when he got an unexpected phone call from hitmaker Lionel Richie. It turned out Richie came across Marx’s demo tape that was passed on through a friend of a friend of a friend, etc. Impressed by what he heard on the recording, Richie encouraged Marx to finish high school and move to Los Angeles to kickstart his career—he even spoke to Marx’s parents during their visit to L.A. right after a performance he did with his then-group the Commodores.

“To have the stamp of potential approval from someone like Lionel Richie at the time, it was just massive,” Marx says today. “He ended up spending his evening post-show on the floor of my parents’ hotel room talking to them for over an hour—basically, make them feel more comfortable about their little boy going out to L.A. and the music biz. I know how much that meant to my parents. Again, I could tell story after story about the kind of guy Lionel Richie is. That tells you everything about him.”

Marx’s earliest encounter with his hero Richie is just one of the many recollections detailed in the Grammy-winning musician’s new memoir, the appropriately titled Stories to Tell (published by Simon & Schuster). Told with both refreshing candor and humor, the book chronicles Marx’s many successes as as a recording artist starting in the late 1980s with such memorable hits as “Don’t Mean Nothing,”  “Should’ve Known Better,” “Endless Summer Nights” and “Right Here Waiting.” That is in addition to the many songs he wrote or co-wrote for other artists, such as Vixen’s “Edge of a Broken Heart,” *NSYNC’s “This I Promise You,” and Keith Urban’s “Better Life.” Along with the stories abou his songs and career, the book shares Marx’s memories of meeting and working with the likes of Madonna, Kenny Loggins, Kenny Rogers, Paul Anka, Olivia Newton-John and Josh Groban. (Coinciding with the memoir, Marx has released a compilation album Stories to Tell: Greatest Hits and More).

“I saw it as an opportunity to connect some dots,” Marx says of writing the book, “where I’ve sort of juggled two careers at once for decades. I have this career as a performer where I get up on stage and I sing the songs that were on albums that I recorded, and that people know me as a singer and as a performer. But then there’s this whole other career as a collaborator, producer and a co-writer, and some of those songs are really famous as well. People in my audience would have no way of knowing that I had anything to do with them, unless they read liner notes or happened to see me talk about it in an interview.”

Prior to getting a record deal, Marx worked as a session singer in Los Angeles for most of the 1980s, appearing on records for acts like Richie and Chicago. One of his earliest memories from that period was how he met Fee Waybill, the lead singer of the rock band the Tubes, who became a lifelong friend and musical collaborator. One day, Marx dropped by at a recording studio at the invitation of producer David Foster as the Tubes were working on the track “She’s a Beauty.” As Marx writes in the book, Tubes guitarist Bill Spooner, perhaps having a bad day, seemed perturbed by the young Marx’s presence in the studio and inexplicably went off on him.

“I got up to leave,” Marx recalls, “and then Fee stepped up and went [to Bill], ‘No. What are you talking about? He’s just a kid, he’s just here to meet with David.’ He really did stick up for me. He, in that moment, sort of took the role of my big brother. He still is to this day. I’ve produced Fee before. I’ve worked with him so many times, but all these years later to go into the studio and make that solo album [2020’s Fee Waybill Rides Again]—I know what that record means to him, and it meant a lot to me as well.”

Marx’s hard work as a session artist paid off for him when he later signed with Manhattan Records, which released his self-titled debut album in 1987. It was an immediate smash, yielding four Billboard Top 3 hits, including the number one ballad “Hold On to the Nights.” “I felt really good about “Endless Summer Nights” and’ “Should’ve Known Better,”” he recalls about his first record, “because those had been on my demo tape for a couple of years, even though they’d been rejected by everybody. I was just hoping that it wouldn’t be a thing where I got dropped after my first album and had to start from scratch again. Once I sold a few hundred thousand copies, everything else was gravy. But then to go triple platinum, crossing genres, having a number one rock track, and then going into the pop chart and MTV really blowing me up—it was all a hurricane of good fortune.”

The follow-up album, 1989’s Repeat Offender avoided the sophomore jinx as it became another hit for Marx. Among some of its aggressive, guitar-driven rock tracks like “Satisfied,” “Nothin’ You Can Do About It” and “Too Late to Say Goodbye,” the record contained another signature hit ballad “Right Here Waiting.” A number one song, “Right Here Waiting” was originally written only for actress Cynthia Rhodes, Marx’s then-girlfriend at the time and now his ex-wife. In the book, he admitted to being hesitant in putting that track on the album.

“I didn’t think much of it,” Marx says now. “I knew it was a pretty melody and that it served its purpose in that I made a little demo tape and put it in the mail to her in South Africa [where she was filming a movie]. To me, that was done. But she played it for all her friends, and it became this sort of chorus of people going, ‘Are you out of your mind? You have to put this out.’ My next excuse was, ‘It doesn’t fit the album. Repeat Offender is a rock album. It’s just this piano ballad. Until I went in the studio and gave it a shot, then I could sort of hear what everybody else was hearing. I had no idea it would be the song that it became.”

Marx continued to score more hits into the 1990s with “Hazard” “Keep Coming Back,” “The Way You Love Me” and “Now and Forever.” Another decade later, Marx experienced a second career peak as a producer and songwriter for such artists as Barbra Streisand, Vince Gill, Kenny Loggins, Ringo Starr and Daughtry. One of his major achievements was co-writing the poignant and autobiographical 2003 ballad “Dance With My Father” with Luther Vandross, who recorded the song. It won a Grammy for Song of the Year in 2004, a year before Vandross’ death at the age of 54. Marx himself could relate to the theme of the song; prior to its creation, he was still shaken by his father’s unexpected death in 1997 until Vandross called him on the phone. “He really swooped in and gave me this virtual hug that I needed,” says Marx, “the right kind that would have started the healing process for me. Now part of it was our friendship, but part of it was just who he was and his intelligence and his knowing what to say to me.

“So cut to six years later, he has the idea for a song called “Dance With My Father,” and he wants to write the story of his father. The next thought he has is, ‘I need to write with Richard Marx.’ He was so proud of that song, and so excited about it. He kept saying, ‘This is my signature song, man.’ The success of it was very validating for him. I’m really proud to  be a part of his story and his legacy, and that song has just moved so many people and changed people’s lives. It’s a humbling thing to be a part of.”

Last year, Marx released his latest album Limitless just prior to lockdown, which was more of a passion project that carried the familiar hallmarks of his recognizable voice and songwriting; it contains “Love Affair That Lasts Forever,” which was inspired by his wife Daisy Fuentes. “It wasn’t an intentioned thing,” he says of Limitless. “It was just sort of like, ‘Oh, I wrote a song, maybe I’ll go and cut the song. I don’t know what it’s gonna be, and I have no intention of making an album.’ And then I did that three or four times, and I was like, ‘Oh, guess what? I’m making an album.’ It became kind of a fun puzzle to find the missing pieces for, and working with all different kinds of people [like Sara Bareilles, Vertical Horizon’s Matt Scannell, and my son Lucas Marx]—it was really a fun album to make. I was thrilled that it was received so well.”

In addition to his music, Marx has become a hugely popular figure on Twitter where expresses his thoughts on a variety of topics with humor and sarcasm; most recently, he butted heads with Kentucky Republican Senator Rand Paul via the platform. “I think it’s interesting that I’ve been considered ‘political’ on Twitter,” he says, “when in fact, I don’t really think it’s bad. I think it’s that I am outspoken about being on the right side of things. I’m not a registered Democrat. I’m certainly not a conservative or anything that resembles a Republican. The other part of it is just to try to have fun with it, and some of the tweets that I’ve done that have blown up. I’m proud of them.”

As he indicated towards the end of Stories to Tell, Marx has no intention of retiring and is readying to go back on the road following lockdown. He attributes his career longevity and perseverance to not having an image or being caught up in the trappings of fame. “I never deluded myself into thinking that this was forever. I never thought I’m gonna be a superstar for 30 years or 40 years now. It became much more important to me to have a career that I was really proud of, and that was beyond just being a performer. The opportunities that I’ve had with this array of different artists of all different genres is something that would not have happened if I was just single-mindedly focused on an artist’s career. So I think it all happened the way it was supposed to happen.

“And the other thing is that the minute I started to feel rejection—and this was even before I had hits—I always had this attitude of retreat and attack in a different direction. It was sort of a built-in thing with me. So when I would get bounced around, get rejected by labels, of course it bothered me. But there was never a second when I didn’t think, ‘Okay, how else could I go at this?’ When my hits on the radio stopped happening, I didn’t throw a big pity party. I was like, ‘I’m gonna go write songs for *NSYNC and Josh Groban, and I’m gonna keep touring and working.’ To this day, that’s my attitude: sometimes you have to retreat and attack in a different direction.”