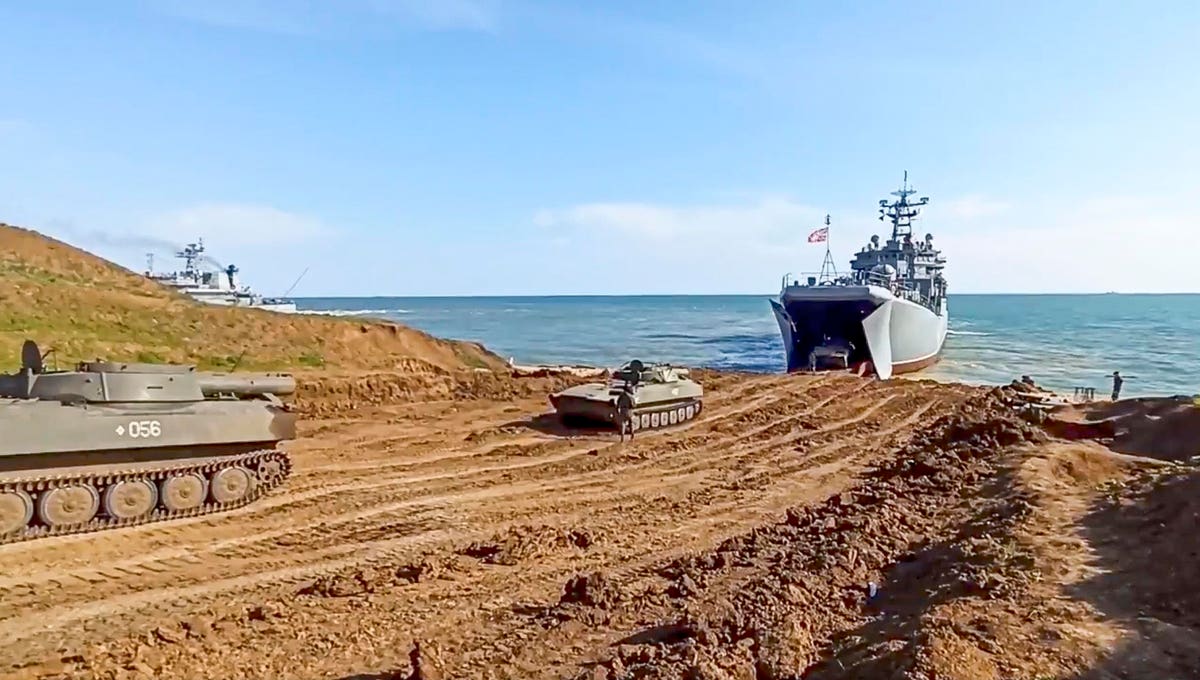 The U.S. has shared intelligence including maps with allies in Europe, sources told Bloomberg Sunday — intelligence that “shows a buildup of Russian troops and artillery to prepare for a rapid, large-scale push into Ukraine from multiple locations” in the event of an invasion, more than seven years after Russia annexed the Ukrainian peninsula of Crimea in a move widely condemned by the West.

Thousands of Russian troops have reportedly amassed near the border with Ukraine in recent days near areas controlled by Russian-backed separatists.

American intelligence officials have shared information with allies warning of a possible Russian incursion, according to reports, with the New York Times saying Friday “the buildup is being taken seriously and the United States is not assuming it is a bluff.”

Bloomberg reported that Moscow has “called up tens of thousands of reservists on a scale unprecedented in post-Soviet times” who would likely be used “to secure territory in a later phase,” citing two unnamed sources.

European allies have been engaging in an “increasingly frantic diplomatic effort” with President Vladimir Putin to deter such an invasion after the U.S. assessment “that Putin could be weighing an invasion early next year,” Bloomberg said.

The head of Ukraine’s defense intelligence agency told Military Times Saturday Russia is planning an attack around the end of January or early February that would likely involve “airstrikes, artillery and armor attacks” followed by airborne and amphibious assaults and a smaller land incursion through neighboring Belarus.

100,000. That’s approximately how many Russian troops are believed to have gathered on the Ukrainian border.

“We see an unusual concentration of troops, and we know that Russia has been willing to use these types of military capabilities before to conduct aggressive actions against Ukraine,” NATO secretary general Jens Stoltenberg said of the recent troop buildup. Moscow for its part has dismissed such concerns as “alarmist.”

Tensions have been high ever since Russia illegally annexed the peninsula of Crimea in 2014, something the United States and its allies have been vocally critical of ever since. In February President Joe Biden reiterated that the U.S. “does not and will never recognize Russia’s purported annexation of the peninsula” and repeated his support for Ukraine in the face of Russia’s “aggressive acts.” Russia expert Timothy Ash told CNBC that Putin “wants Ukraine, as he never accepted its loss in ’91 with the collapse of the USSR, and sees Ukraine as central to his vision of Greater Russia.” Both nations were part of the Soviet Union before its collapse in 1991; Crimea became part of Ukraine in 1954 and has been a flashpoint ever since.

“The world is worried Putin is about to invade Ukraine. Here’s why” (CNBC)

“Everything you need to know about the Ukraine crisis” (Vox)