Schedule, Odds, Betting Trends And Predictions Against The Spread 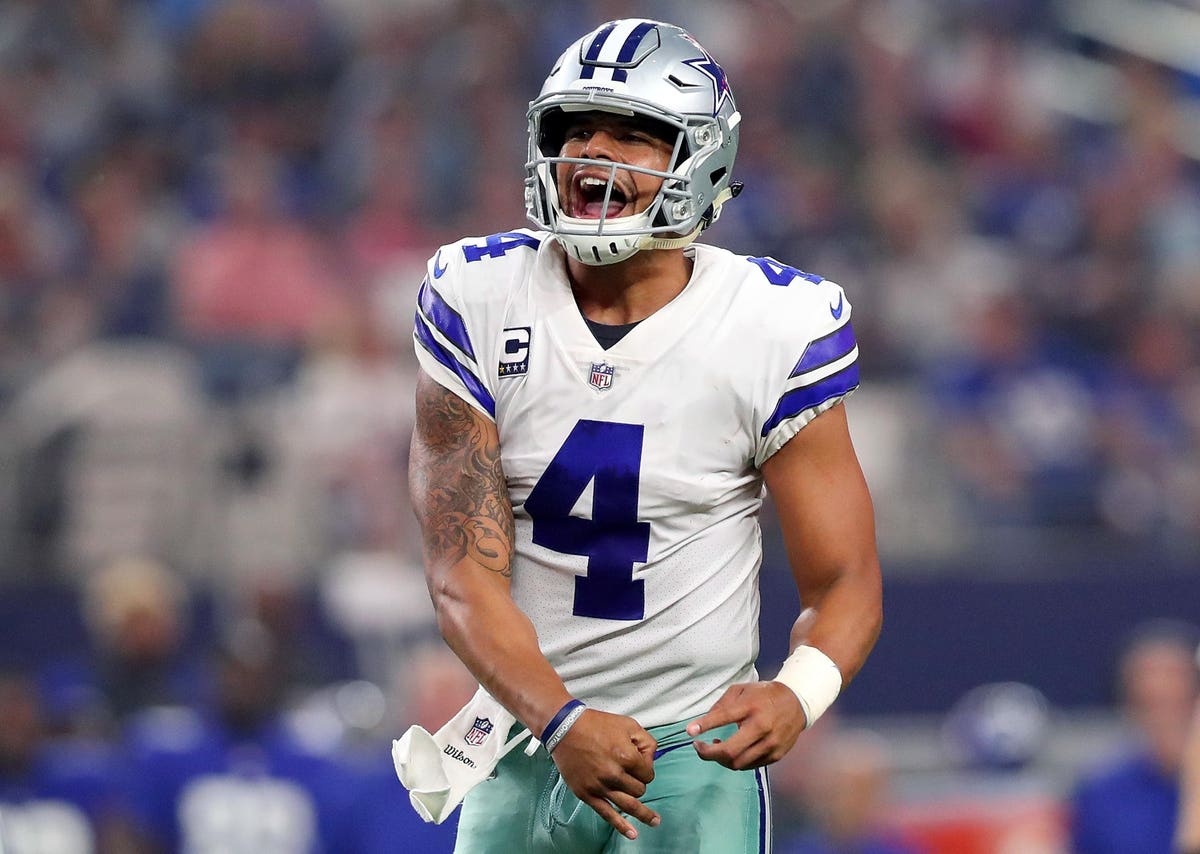 Week 5 of the 2021 NFL season gets underway with an exciting NFC West rivalry game between the Seahawks and Rams on Thursday Night Football. There’s plenty more in store as the campaign rounds past the quarter mark, including the last action-packed Sunday before bye weeks begin.

It all starts at 9:30 a.m. ET, when the Jets and Falcons go head-to-head in the NFL’s return to London. That leads into a flurry of eight simultaneous kickoffs in the early afternoon, headlined by the upstart Bengals hosting the powerful Packers in a battle of one-loss teams. The late afternoon timeslot will showcase several marquee matchups between playoff hopefuls, including the Browns vs. Chargers, Bears vs. Raiders and 49ers vs. Cardinals.

A pair of riveting primetime games will conclude Week 5. The first will see the Bills take on the Chiefs at Arrowhead on Sunday Night Football. This rematch of last year’s AFC Championship Game is a can’t-miss clash between two of the conference’s top squads. The final game of the week will see the Colts and Ravens duke it out on Monday Night Football, a game Indianapolis can’t afford to lose after a poor start to the 2021 campaign.

While there are plenty of games that will have you glued to the edge of your seat, there is always the option of placing a wager down to up the ante. It’s never wise to make a bet without being informed, however, so read on for key betting trends and picks for some of Sunday’s top matchups.

Before getting to the predictions, take a peek at the complete schedule, start times, TV channels, live stream sites and updated odds courtesy of FanDuel for every Week 5 game during the 2021 NFL season.

The Rams are 7-1 ATS over their last eight primetime games. Los Angeles is coming off an ugly defeat to the Buccaneers, but have a history of bouncing back. Under head coach Sean McVay, LA is 15-5 SU and 13-6-1 ATS in its last 20 games after a loss, including a 7-1 ATS streak following their last eight losses. The Rams are a 2.5-point road favorite against the Seahawks on Thursday Night Football.

The Vikings are 7-0 SU and 6-1 ATS over their last eight matchups with the Lions. Minnesota has dominated this NFC North rivalry since November 2017, winning every game and failing to cover just once by a single point in the most recent clash. The Vikings are currently nine-point home chalk in their first meeting against Detroit for the 2021 NFL season.

The Broncos are 6-3 SU and 7-1-1 ATS over their last nine contests against the Steelers. Denver has covered or pushed in each of its last six matchups with Pittsburgh. The Broncos have been especially potent as an underdog—they are currently a one-point road ‘dog in Week 5—covering in each of the last four games they were getting points in and outright winning two of them.

The Giants are 11-2 ATS across their last 13 road games. Big Blue has been strong away from MetLife Stadium in recent seasons, with quarterback Daniel Jones playing especially well as a visitor. The signal-caller has 25 touchdowns against seven interceptions for his career on the road compared to 14 TDs and 16 INTs at home. The G-Men visit the rival Cowboys in Week 5 as a seven-point underdog.

The Cardinals are 10-4 SU and 9-3-1 ATS over their 14 clashes with the 49ers. Arizona, the NFL’s last remaining undefeated team, will look to keep its record unblemished as five-point home chalk against the NFC West rival Niners on Sunday. San Francisco has played this opponent well recently, winning three of the last four outright, but covered just once in that span.

The Vikings are looking for their eighth win in a row against the Lions in Week 5. They should get it thanks to their explosive offense.

Although Minnesota has just one win under its belt right now, Kirk Cousins has been playing exceedingly well. The veteran quarterback has completed 69% of his passes for 1,121 yards and nine touchdowns against a single interception.

Cousins will get an opportunity to toast Detroit’s beatable defense on Sunday. The Lions are allowing foes to score 29.8 points per game, a mark that ranks No. 29 in the league. Considering they are generating a meager 20.3 points on the other side of the ball, it’s going to be tough sledding for this rebuilding Detroit club.

Lay the points here and watch as Minnesota scores in bunches, running away with this game early and ultimately winning by double digits.

Broncos quarterback Teddy Bridgewater may be sidelined for this contest after suffering a concussion last Sunday. Denver should still be able to win even if the veteran fails to clear the NFL’s protocols. Drew Lock had a tough half replacing Bridgewater this past week, but should be better with a more preparation time as the likely starter for Week 5.

Pittsburgh’s offense looks finished with Ben Roethlisberger under center. The two-time Super Bowl champion has clearly lost the mobility and arm strength that once defined his Hall of Fame career.

The Steelers are averaging a meager 301.8 yards and 16.8 points per game through the first month of the season, pitiful numbers that place them well behind even Denver’s middling (353.8 YPG, 20.8 PPG) offensive attack.

With Denver’s top-notch defense only allowing 267.8 yards and 12.3 points per game—the fourth- and second-best marks in the league respectively—Pittsburgh simply won’t be able to manufacture enough points to win or cover.

The Giants finally earned their first win of the 2021 NFL season this past weekend. They’ll try to make it two in a row when they take on the rival Cowboys in Week 5.

New York played well against this opponent last year, outright winning the last game and losing by just three in the first matchup of 2020. Daniel Jones played well in both games, completing 37 of his 58 passing attempts for 451 yards and two touchdowns against one interception.

He did lose a fumble in each contest, something the signal-caller will have to avoid if the G-Men want to pull the upset on Sunday. Dallas currently leads the league in turnover differential at plus-seven, forcing 10 takeaways against three giveaways on the year.

If Jones—who just threw for 400-plus yards and a pair of scores against the Saints—can stay hot, Big Blue should be able to keep this one within a single score.