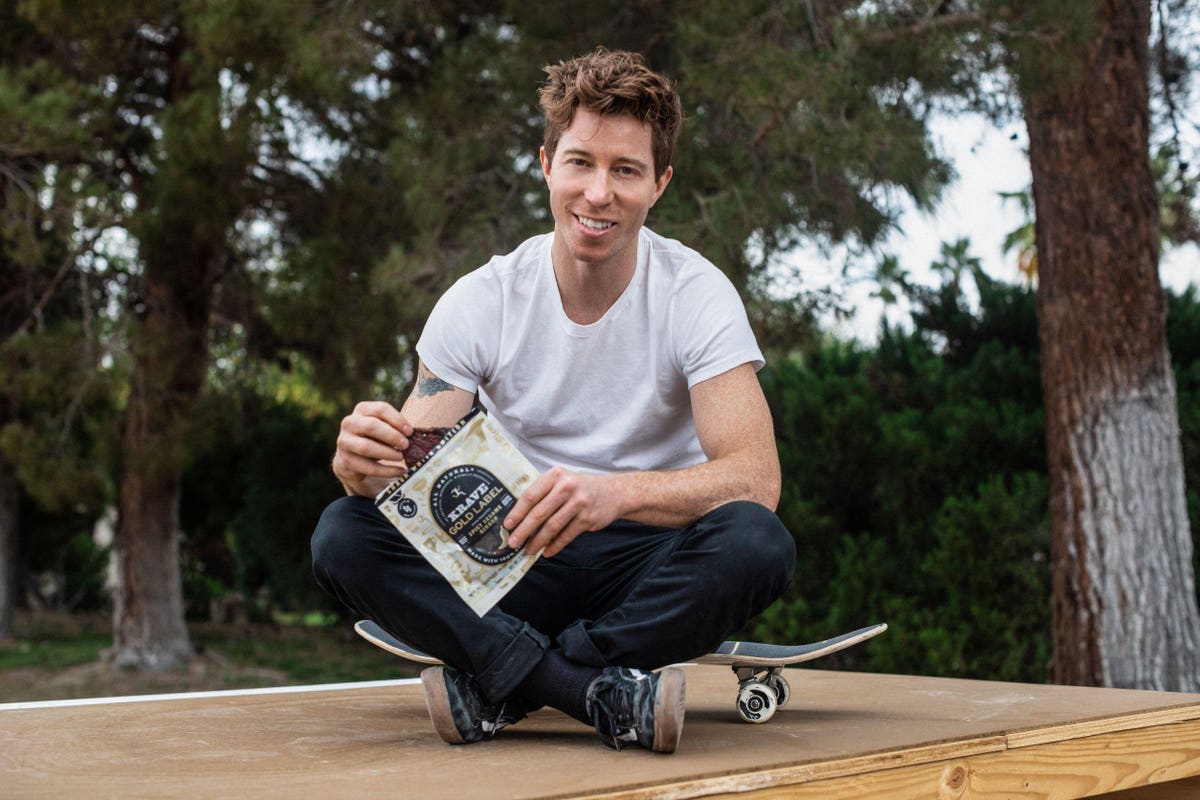 If all goes according to plan, four-time Olympian snowboarder Shaun White will be going for his fourth gold medal in halfpipe at the Beijing Olympics in February.

But before he kicks off a hectic slate of Olympic qualifying events this winter, he’s focused on a different kind of gold as he and jerky brand KRAVE launch White’s limited edition Gold Label beef jerky flavor, Spicy Sesame Ginger.

White joined KRAVE as an investor and brand ambassador in March, and developing his own jerky flavor has always been in the plans. Before that project, however, he worked with the brand as it underwent a refresh, including a website update, a move to 100% grass-fed beef and a zero sugar line.

The new playful ads reflecting the brand’s ethos—fun, bright colors and tongue-in-cheek advertising—included a spot with White, in which he appears wearing a wig meant to resemble his former, iconic flowing red locks as he transitions from a snowboarding set to his skateboard.

“It really ended up capturing my sense of humor, the aim of the brand, being a more relaxed company, and this is what we’re all about, plain and simple,” White told me. “I really enjoyed being a part of that. Everything they were aiming for, I think we really nailed it.”

White, 35, has always had a voice in his long career with partners—he received his first sponsorship at the age of seven with Burton snowboards and has worked with heavy hitters like Mountain Dew and Oakley. But his relationship with KRAVE, as an investor as well as an ambassador, has been even more hands-on—and even more rewarding.

For a serious as White has been throughout his career about competition, fans have gotten to know him for his self-effacing sense of humor and commitment to authenticity off the mountain. As a partner, KRAVE has teased those qualities out of White and made sure to incorporate them in its own messaging and advertising.

“In all the aspects of my life, I’m just having fun with it—even snowboarding. It’s why I did it in the first place. It’s just enjoyable,” White said. “It became more a of career path—I hate to use the term job, but it became a focus of where I get fulfillment in my life by achieving goals and things. But gosh, in the beginning, obviously the fun of it all and the enjoyment was always there, and I think that’s what I try to bring into each deal I do.”

In the KRAVE commercial, it was important to White to “make sure this is a product that is fun and people can tell I had a hand in it,” he said. “I’m wearing my old hair, I pull this wig off, kind of making fun of myself; those are things that I think people will know I’ve had a hand in it, because it’s authentic to me.”

When White joined Krave in March, the company announced he would be developing his own jerky flavor. That process took months, as White and the team refined the flavor and tweaked the recipe to arrive at exactly the right balance of spicy and sweet.

“I’ve had so many mystery packets sent to my house,” White said with a laugh. “There’s been different adjustments of the flavor. I’m super excited about it because I’ve been eating these packets for as long as I can remember now.”

White had everyone—the pool guy, the FedEx guy, his friends and even his girlfriend, Nina Dobrev—sample the flavor through its many iterations. Dobrev was especially helpful because she “doesn’t really dig” spicy food, while White’s spice palette is highly developed, so she helped him calibrate the spice levels appropriately.

“It’s been awesome, and I’m really happy with the finished product,” White said.

The flavor name harbors multiple winks that longtime fans will recognize—gold label is a reference to White’s Olympic aspirations; ginger, of course, for his signature red hair; and the Asian flavors are a nod not only to his love of Asian food but the location of the 2022 Games in Beijing.

“KRAVE’s exclusive collaboration with Shaun in creating our new Spicy Sesame Ginger Beef Jerky exemplifies the KRAVE message perfectly: KRAVE’s superior, premium protein snacks prove that ‘Better for You’ doesn’t have to be boring,” said Steele Meisinger, VP of marketing at KRAVE. “We couldn’t be more thrilled to launch this new jerky flavor with him.”

White’s limited edition flavor is available now on KRAVE’s website and will be rolling out into grocery stores in early 2022. That is, of course, when the pre-Olympic push will be ramping up, as White and the other members of the U.S. snowboard team will be hoping to clinch their qualifications to the Tokyo Games.

Between now and then, events like the Toyota U.S. Grand Prix from December 8-11 and Dew Tour from December 16-19, both at Copper Mountain in Colorado, will be crucial opportunities to amass enough points to clinch a spot on the U.S. Olympic team.

If he drops into the halfpipe at the Beijing Games, White would be the United States’ oldest Olympic snowboarding halfpipe competitor ever—a fact he’s not keen on being reminded of. At this point in his career, however, he credits a healthy lifestyle and a healthier mind-set about competition with enabling him to hang with—and hopefully, defeat—the sport’s young guns.

In late October, White shared a video to his Instagram of a nasty fall he took at training camp in Switzerland, catching the lip of the halfpipe before sliding on his back into the flat bottom. That fall “took a minute” to come back from, White said—he experienced whiplash, hurt his back and his hips felt out of line—but he did get back, and he felt good about it.

“I think youthfulness helps you rebound from those a lot easier, even more than a healthy lifestyle,” White said with a laugh. “It’s an unfortunate side effect of progression; you’re gonna make mistakes, things will go wrong and it’s how you handle it.” He takes more precautions now; his helmet protected him from getting a head injury from the impact, and the decision to slide down the halfpipe wall on his back was intentional—he was wearing a padded shirt with a back brace protector under his sweatshirt.

But nutrition helps too, and White pays more attention to it now than he ever did during his career. “If you’re living a healthy lifestyle, that recovery time is less, so I know I try to do that,” White said. “For the mental side, you just gotta go, ‘Okay, let’s get back to it, make the adjustments, you know, okay, I did this wrong, I did that wrong, I won’t do that again.’ You know this is the case and you start over. It’s a grueling process sometimes—hopefully that’s not the outcome every time, but it does happen.”

As for putting together a run that can earn gold at the Beijing Games—when White took gold in 2018 in PyeongChang, he run included back-to-back 1440s; ahead of Beijing, some of his competitors have started incorporating triple corks—White knows exactly what he needs to do.

“We’re all in this race to the Olympics,” White said. “There’s the finish line and it’s like, okay, what can you get by the time that rolls around, and what are you confident with? You don’t want to roll in there with a maybe; you want to at least have a quality run that’s solid, and then something maybe a little out of your comfort level, but you could do it under pressure—here’s the wild card run, just in case. We’re all in that same boat.”

When Gold Label Spicy Sesame Ginger launches in stores in early 2022, it will mark only the beginning of what White has planned for this future with the brand. “When it hits shelves, stay tuned, because we’re gonna do a lot more,” White said.