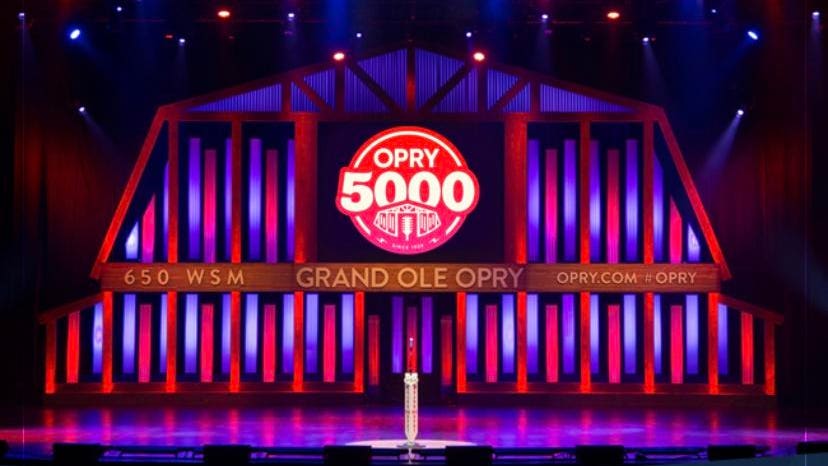 Linda “Brady” Tankersley has been an usher the Grand Ole Opry for more than 47 years. The show, however, was part of her life long before that.

“I was raised on country music and the Grand Ole Opry,” she says. “That was back in the days when you’d go to people’s houses and listen to battery radio.”

Everyone would gather for the Saturday night broadcasts on WSM Radio. Her exposure to country music was also influenced by her much older brother.

She still remembers how he would sing Hank Williams’ songs.

“My brother loved Hank Williams and his music. He happened to be there the night Hank debuted on the Opry and got those six standing ovations. The crowd just wouldn’t let Hank go.”

She recalls the shock and sadness that reverberated around the county when William passed away on New Year’s Day 1953, at the age of 29.

“It was such a huge thing when he died because everybody loved Hank Williams.”

After graduating high school, Brady left Giles County, Tennessee home and moved to Nashville. She started going to the Grand Ole Opry shows when they were still at the Ryman. The Opry moved to the new building that serves as its home today in March of 1974. Brady started working there in May of that same year.

In the years since, she’s seen so many country music greats, it’s difficult to list them all. Still, she has has some favorites.

“Marty Robbins, Ernest Tubb, Roy Acuff,” she says. “Of course, Roy Acuff meant a lot because he was the king of country music.”

She loved watching him take the stage with Minnie Pearl.

“It was just a joy to see Roy and Minnie together because they played off each other so well. She’d make a comment about that cross-eyed rooster or something, and Roy would just add right to it. He’d ask her whatever he was supposed to ask her, so she could carry right on with that joke.”

Minnie Pearl (whose real name was Sarah Collier Cannon) played the country character she created so well, most people had no idea she was college-educated.

The Grand Ole Opry aired its first live Saturday night broadcast over the radio on November 28th, 1925. This weekend marks the 5000th consecutive Saturday night show. Through the years, the greatest artists in country music have graced the Opry stage.

“A lot of those artists dressed the part,” Brady recalls. “They had the rhinestones like Little Jimmy Dickens. Porter Wagoner wore those suits, even Hank William had those blingy jackets. Mel Tillis had a huge band and they all wore nice suits. He used to say if you’re going to be here on stage in front of people, you should dress the part. I think Porter always said that, too.

The Opry has become well-known for surprise guests. While there’s always a list of scheduled performers, you never know who might be in town and choose to show up unexpectedly. Brady remembers the night that happened with Merle Haggard.

“We heard he might show up, but we really weren’t sure. When he did, and they introduced him on stage people went wild. They were so excited. They gave him a standing ovation and some of them were crying. It was crazy. It turned out that was the last time we got to see him because he died within the next year.”

It’s always a big night when major artists like Dolly, Loretta, and Garth Brooks come to the Opry. Brooks generates the same kind of excitement today, that he did when he first burst onto the country music scene in the 90s.

“Back in the early days, he’d play the Opry the entire weekend. We’d have two shows on Friday night and two shows on Saturday. He would do his shows and the rest of the time sign autographs. He’d sign, sign, sign, then when he’d leave, he’d get in his truck and there would be people out there on that service road who couldn’t get in the Opry and he would stop and sign autographs for them. To me, Garth is probably as close to Marty Robbins as anybody in his love for his fans.”

Every Opry show features eight to 12 artists. Over a two-hour period, there’s usually something for everybody.

“It’s just an entertaining show with a variety of performers,” Brady explains. “We have new artists, a lot of debut artists and some of them are very good. Then we have the legends.

Some of those legends serve as regular Opry hosts like Bill Anderson, Connie Smith, Johnny Seeley, John Conlee, the Gatlin Brothers, and others.

“I love the Gatlin Brothers, “Brady says. “And Larry Gatlin is hilarious. He used to come in singing “Houston” then go down those steps and start dancing with people and take their popcorn. With COVID he can’t do that anymore. So, the other night there was a girl on the front row, and he asked her to dance. He stayed up on stage and played like they were dancing. He even acted like he was twirling her.”

Some newer artists, like Chris Janson, have built their careers, in part, through their many performances on the Opry.

“Everybody likes Chris Janson,” notes Brady. “He’s so energetic, he’s a real entertainer. He also loves and respects everything about the Opry, the history and tradition.”

History and tradition matter. So much so, when the coronavirus pandemic forced music venues to shut down, individual Opry members volunteered to perform in front of 4400 empty seats, with only the film crew in the building, to make sure the Saturday night broadcasts continued.

The streak continued, just as it has for 96 years. And this Saturday, featuring an all-star line-up will come together to celebrate the 5000th continuous broadcast.

And Brady will be there to work it.

“I think it’s wonderful the Opry broadcast has been going on that long. I mean, it’s history. It’ll never happen with anything else I can think of. I’m so excited.”

While the show itself may is definitely sold out, music fans can listen, like always, to the live broadcast via WSM Radio. (See the link below.) The Opry starts at 8pm EST, 7pm CT.