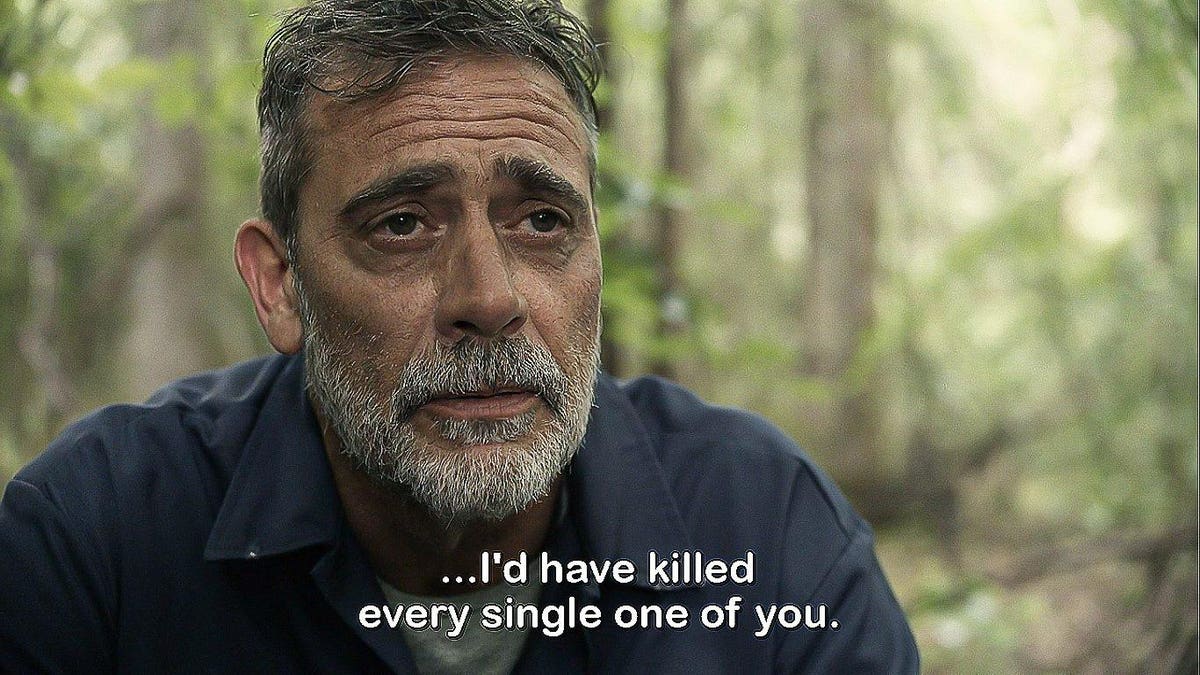 Right now, The Walking Dead feels like a show split in half. One portion is trying to remain faithful to Robert Kirkman’s source material, the final Commonwealth arc of the comics where a class-divided society continues to exist in the apocalypse. The other is an entirely new arc invented by the show itself, facing off against the Reapers, a new murderous threat, as Daryl infiltrates them and Maggie and Negan have to work together to beat them.

I never liked the Commonwealth arc in the comics, and I don’t like it in the show either, which is no great surprise. But I love what The Walking Dead is doing with its own original storyline, especially the interactions between Negan and Maggie, which peaked in an absolutely fantastic conversation that addresses something I’ve wanted to talk about for years.

In the conversation, Negan admits that the “right” thing to do all those years ago was to kill everyone in the lineup, rather than just a few of them, which led to the Savior war which he badly lost, and nearly his entirely community being killed.

Maggie is horrified when Negan says this, but Negan pulls the trap card, the thing I’ve wanted to talk about. He brings up the fact that it was Rick who struck first before the line-up even happened. This is when Rick, Glenn and others snuck into one of Negan’s satellite outposts and slit everyone’s throats as they slept. Between this and Daryl blowing up some Saviors, war was essentially declared on Negan before the famous line-up even happened.

Maggie counters by saying that there were no women and children at the outposts, and that Negan was worse because he was executing people in front of their families. Negan responds by saying that he knows that Aaron got Gracie by kidnapping her from a Savior base, and she shouldn’t be throwing stones. The men in the outpost were husbands, boyfriends, and fathers to children like Gracie, after all.

I have wanted to see this brought up for years as when the show did this way back in season 5, it totally changed the source material and made Rick the instigator, not Negan. And by comparison, Negan killing two men, albeit gruesomely, almost did not even seem like enough of a retaliation, given how many people Rick and his group had killed. Rick was cocky, and thought the outpost was the entire size of the Savior force, but learned the hard way that wasn’t true, and lost countless friends as result.

I am glad to see The Walking Dead return to this after all this time, as it has been bothering me for years, and even Maggie seemed to eventually understand what Negan was talking about. This culminates in Negan training Maggie to be a Whisperer, a common threat they both faced, and another lesson in doing whatever it takes to protect their people, even embracing tactics of their enemies.

I thought this was a great episode (minus most of the Commonwealth stuff), and I love what The Walking Dead is doing with Negan and Maggie this year in particular. Looking forward to seeing how this all plays out in the rest of the season, and whether both will survive until the end.