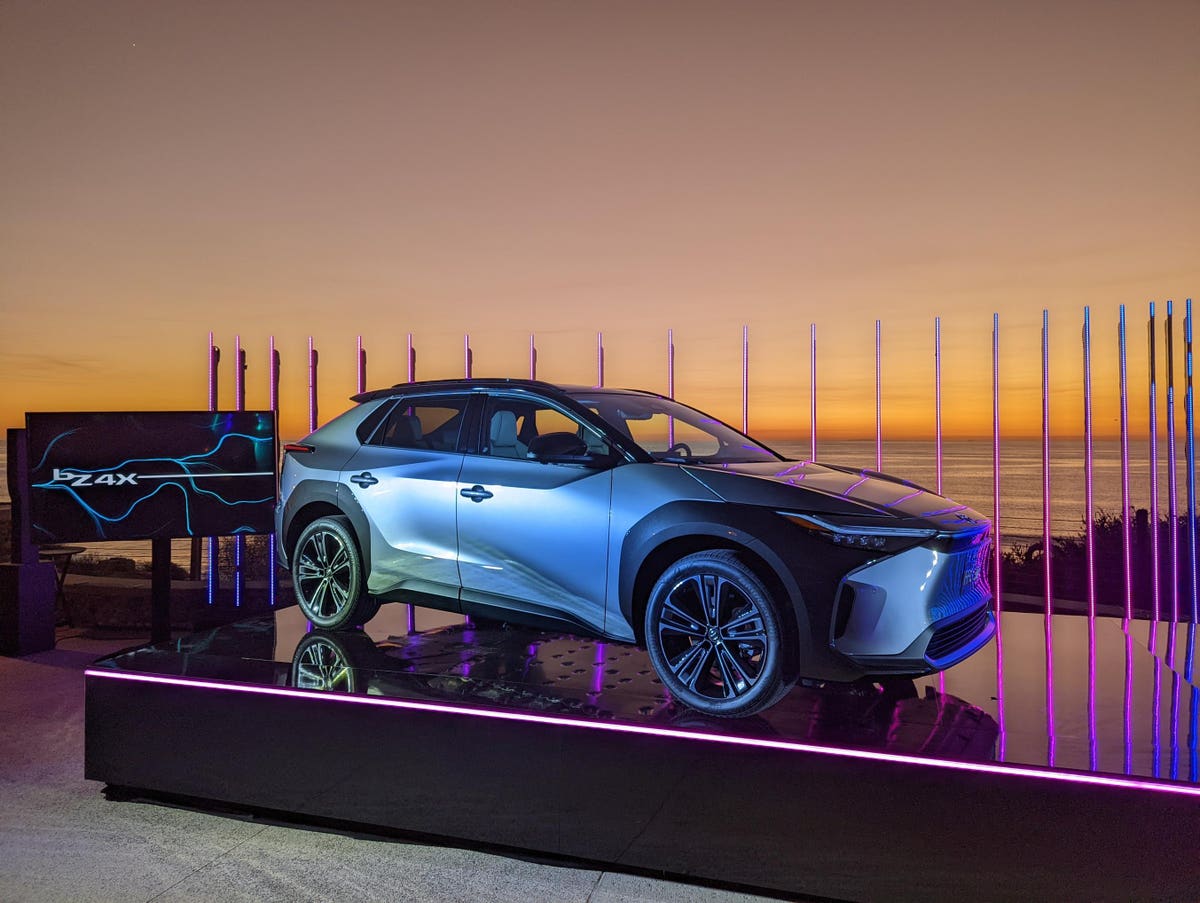 Over the past quarter century, Toyota has been a pioneer in bringing vehicle electrification to the masses. The world’s largest automaker launched the Prius as the first mass-market hybrid electric vehicle in 1997 and has sold over 18 million hybrids since. Despite this acknowledgement that electric propulsion is good, Toyota has remained remarkably averse to vehicles with plugs. However, in spring 2022, the first purpose-built battery electric vehicle (BEV) from Toyota will go on sale as the bZ4X midsize crossover.

This will actually be Toyota’s fourth BEV, but the prior attempts were all conversions of existing internal combustion models, two generations of the RAV4 and the Toyota/Scion iQ. All of these fall very much into the category of compliance vehicles, built only to comply with zero-emission vehicle mandates in California and elsewhere. None sold in any significant volumes with the iQ getting fewer than 100 sales in the US.

The unfortunately named bZ4X is something entirely different and is planned to kick off a wave of BEVs for Toyota and Subaru over the next several years. The two companies collaborated on development of the architecture and Subaru is going to sell a virtually identical model badged as the Solterra.

From a design perspective, the bZ4X is a blend of several themes. This includes elements of the current Rav4, big, bold, contrasting black wheel arches and a flat face somewhat reminiscent of a Tesla Model Y except for the black bar across the top and a slim cooling air intake at the bottom.

At 184.6 inches from bumper to bumper, the bZ4X slots in right between the existing Rav4 and Venza. However, like most BEVs, the wheels are pushed out further to the corners yielding a 112.2-inch wheelbase compared to the 105.9-inches of the two gas/hybrid crossovers. Inside, the flat under-floor battery pack and longer wheelbase yield plenty of space for passengers. With the driver’s seat set for a 5-ft-11-inch frame, there was a good 5-6-inches of knee room in the back seat and plenty of head clearance.

Toyota hasn’t revealed full specs of the cargo volume, but it appears to be comparable to the Rav4 which has 37.5 cubic feet behind the second row seats. While some will bemoan the absence of a front trunk, a couple of cubic feet in front that is only suitable for small items is a good tradeoff for real usable space in the back. A deep channel just beyond the steering wheel leads to a digital instrument cluster while a large touchscreen dominates the center of the dashboard.

The underlying platform has been dubbed e-TNGA and looking over the specifications of the bZ4X, one begins to think that this is very similar to the BEV that Ford was developing before Jim Farley and other senior management scrapped the plan in favor of what became the Mustang Mach-E.

The default configuration has a single front-mounted motor putting out 150-kW or 200-hp. That’s what you’ll find in the Chevrolet Bolt, VW ID.4, Hyundai Kona and Kia Niro. It’s unlikely to get anyone’s adrenaline pumping, but it’s more than adequate for anyone’s daily driving needs. The instant torque provided by the electric motors also means that the bZ4X will feel more spritely off the line than a similarly powerful gasoline model. Nonetheless, bZ4X owners won’t want to challenge any Tesla owners to a drag race.

An all-wheel-drive version will also be offered with dual motors but they will only produce 80-kW each, adding about 15-hp to the total to help offset the extra 200-pounds of weight. Toyota group vice president for product planning Cooper Erickson explained that the AWD version is only meant to provide improved traction rather than increased performance. The decision to use smaller, less powerful motors for the AWD helps keep the cost and weight down.

Since Subaru apparently took the lead on much of the platform development, it should come as no surprise that Toyota is claiming this vehicle will have good off-road performance thanks to its Grip-Control feature.

Between the axles is a 71.4-kWh (72.8-kWh for the AWD version) lithium-ion battery. Toyota is projecting that the FWD bZ4X will deliver about 250 miles of range, while the AWD will probably do slightly worse because of the added weight. That’s in the same ballpark as those previously mentioned mainstream competitors but it will likely draw jeers from Tesla fans. However, Toyota has learned a lot about preserving battery life over two decades of building hybrids and promises that the batteries in its BEVs will retain 90% of their capacity after 10 years of use.

Batteries for the bZ4X will be supplied by both Panasonic and CATL. One battery type will be used in the FWD models while the other will go into AWD versions although Toyota officials were unable to say which supplier will be in each. The difference comes as a result of slightly different performance characteristics which match better with each motor configuration.

While Tesla and other EV startups are regularly making a big deal of getting 300-400 miles on a charge, the reality is that somewhere in the 200-250 mile range is probably the sweet spot for most drivers. Studies have shown that 75% of drivers go less than 40 miles per day, so even when operating in cold climates where range declines, the bZ4X will only need to be charged a couple of times per week. The standard heat pump climate control system for both heating and cooling should also minimize the range hit in winter or summer driving.

The latest 3.0 version of the Toyota Safety Sense driver assist package is included on the bZ4X with upgraded radar and camera software. The pre-collision functionality now includes low light cyclist detection, daytime motorcyclist detection and guardrail detection. Gauging how much better these are will have to wait for a drive opportunity sometime in early 2022.

For those that have become accustomed to driving BEVs with one-pedal braking capability, one aspect of the bZ4X may be disappointing. Toyota has a different philosophy about strong regenerative braking compared to many other automakers. Toyota prefers to replicate the behavior of internal combustion models with mild coast down to help ease the transition to BEVs. Drivers can enable some stronger regen by moving the transmission shifter to the B mode as they do on Toyota hybrids, but the vehicle won’t come to a complete stop without applying the brake pedal.

The bZ4X will go on sale in North America in the spring of 2022 with pricing to be announced closer to the on-sale date. However, Toyota officials say it will be competitive in the segment, which means it should start somewhere around the $40,000 sticker price of the base VW ID.4 which also has a 250 mile range.