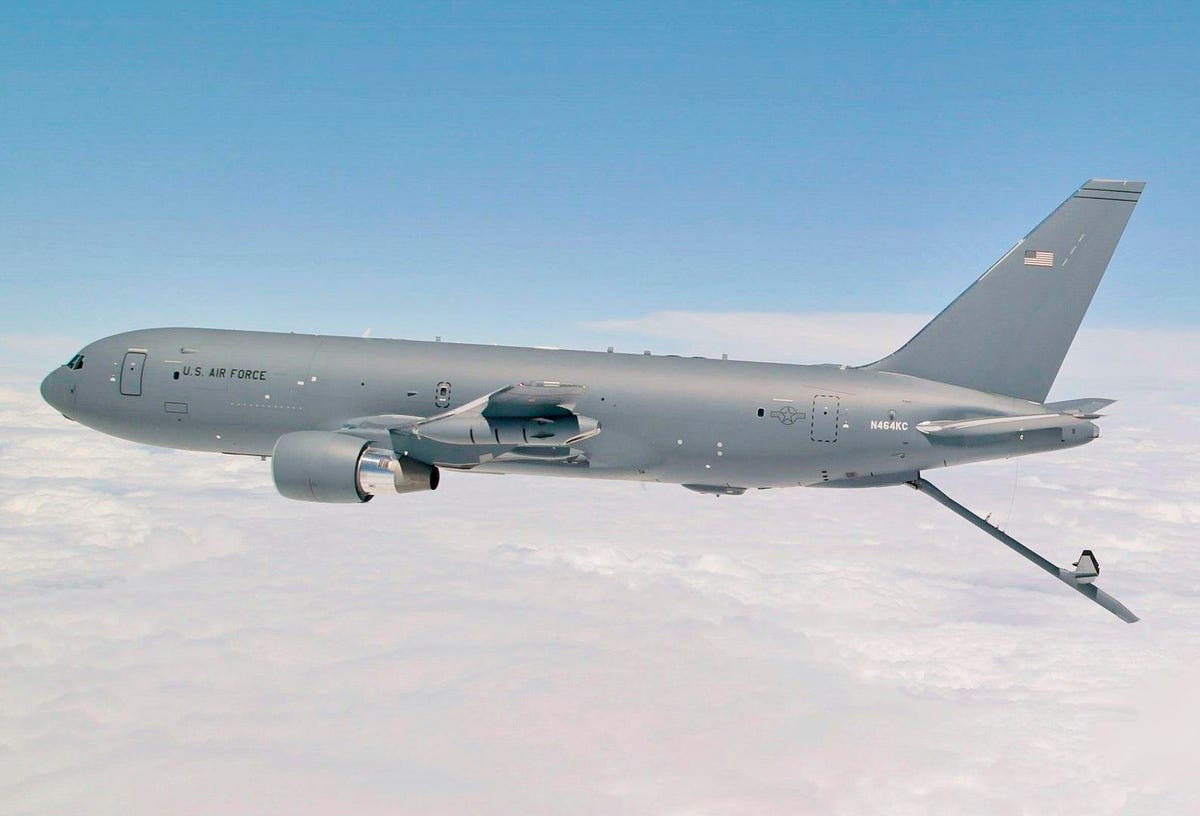 The U.S. Air Force in June released a “sources sought” announcement for the next installment in its program to replace over 400 aged aerial refueling tankers.

The new effort is frequently referred to as a “bridge tanker,” meaning the transitional aircraft to a future generation of refuelers.

Aerial refueling of U.S. and allied aircraft is essential to the performance of many missions, especially in the Pacific where distances often exceed the unrefueled reach of combat aircraft.

However, the existing tanker fleet has grown decrepit with age; the most common refueler in the fleet is the KC-135, a plane based on the same airframe as the old Boeing 707 jetliner that first joined the force in 1957.

A decision for Pegasus to enter full-rate production has been delayed by problems with its remote vision system, which uses a camera enabling personnel in the plane’s cockpit to direct fuel into receiving aircraft through a boom extended from the plane’s rear.

The Air Force has recently approved the design of an upgraded vision system that is expected to resolve problems with glare occurring during the 7% of a typical flight day when the Sun is low in the sky.

Other issues encountered during KC-46 development have all been resolved.

The Air Force has spent $1.6 billion flight testing Pegasus, and it is now certified to refuel the vast majority of combat aircraft in the joint fleet.

Assuming the service does not wish to repeat this costly and protracted process with a different aircraft, KC-46 would seem to be the obvious candidate for the next increment of tanker purchases.

However, there is a possibility that Airbus will offer its much bigger “multirole tanker transport” based on the A330 jetliner, even though the Air Force rejected that solution in a competition ten years ago.

The Airbus alternative is getting a push in Congress from legislators tied to Alabama, where Airbus would send jetliners to be modified into a tanker configuration if it had a U.S. buyer.

The Airbus tanker might be offered in concert with Lockheed Martin, which has a teaming arrangement with Airbus on aerial refueling opportunities (Boeing and Lockheed both contribute to my think tank).

If the Air Force gets to a point where it holds a competition for the next lot of tankers, the outcome isn’t likely to be different from the matchup a decade ago, in which the deputy secretary of defense described Boeing’s entry as “the clear winner.”

In other words, it wasn’t close. Here are four reasons Airbus doesn’t have what the Air Force wants in a future aerial refueler.

Size matters. This is one instance where bigger isn’t better. The Airbus tanker is 40% heavier than KC-46 and takes up nearly 50% more space on the ground.

If all Air Force tanking missions were conducted from the Dallas-Fort Worth airport, that might not be a problem. But in places like the Pacific, usable air bases are often severely constrained in terms of space, so a bigger plane means less tankers on the ramp, or (even worse) less room for fighters and bombers.

And because it is so much bigger, with 30% greater drag than the 767 airframe on which KC-46 is based, the Airbus tanker burns 1,000 more gallons of fuel per hour. Multiply the number of hours flown by the price of jet fuel, and operating costs over a 30-year service life become much higher than with KC-46.

Not to mention greenhouse gases.

Fleet diversity drives up costs. The Air Force has repeatedly stated that it needs to reduce the number of aircraft types in its fleet to save money. When aircraft are operated in small numbers, each tail costs more to operate because economies of scale are lost.

Whoever decides which plane should be the bridge tanker will have to take into account the fact that adding another aircraft type to the fleet means new training programs for pilots and maintainers, unique stores of spare parts, construction of hangers that can house bigger aircraft, and other costs.

A large fleet of KC-46 refuelers is intrinsically cheaper to sustain than a split fleet of two aircraft types, even if the fuel consumption per flight hour were the same—which it isn’t. This in the main reason the Air Force is so eager to retire its small fleet of KC-10 tankers, even though they are newer than the KC-135s.

Capability upgrades would be unavoidable. The KC-46 tanker took a decade to develop even though it was derived from a commercial airframe because it was required to comply with 738 unique Air Force requirements. It isn’t likely that the next time around the Air Force is going to settle for a less capable tanker.

Boeing elected to build KC-46 on a dedicated assembly line, whereas the Airbus tanker is built on a commercial assembly line and then modified at a different location. Installing all the necessary features, such as offensive and defensive systems, is likely to generate unusual engineering challenges.

For instance, KC-46 comes equipped with flight deck armor to protect the crew and is hardened against the electromagnetic pulse generated by nuclear weapons. Airbus will have to comply with all sorts of new requirements, otherwise the Air Force will end up with a less flexible fleet of disparate refuelers.

Certification would take time. The Airbus tanker is not certified by civil aviation authorities to the standard required by the Air Force. Its operation within U.S. airspace would have to be rigorously evaluated by the Federal Aviation Administration, and the time required to accomplish that task could be lengthy.

In addition, it would have to be certified by the Air Force’s internal regulatory body for use as a refueler with each of the 15 aircraft types for which KC-46 has been approved. This will require hundreds of millions of dollars and several years to accomplish, generating costs that additional KC-46 tankers would not incur.

Bottom line: The Airbus tanker is going to look like a budget-buster to the Air Force, and many of its costs such as post-production sustainment are beyond the company’s ability to control. So the main role of an Airbus offering in any competition to secure a bridge tanker will be to discipline the features of Boeing’s winning bid.