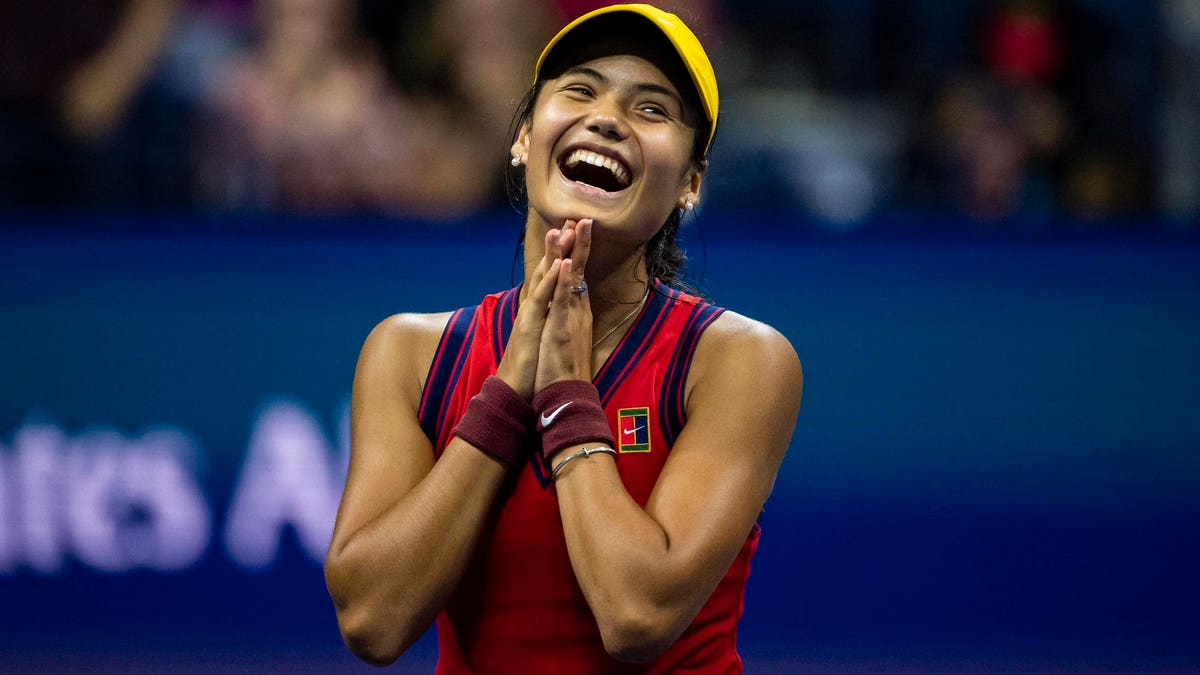 Last month, Wimbledon announced the price for its latest set of No 1 Court debentures, a cool £46,000 ($34,000), which would entitle the buyer to one ticket per day for the first 11 days, plus access to the debentures lounge and hospitality.

It’s a lot of money to fork out – up from £31,000 last time – but with a roof now over No 1 Court, play is guaranteed every day for the first 11 days and Wimbledon chairman Ian Hewitt says the Emma Raducanu effect could lure more potential buyers.

Previously on FORBES: Wimbledon More Than Doubles Guaranteed No 1 Court Seats To $44,655

Debenture tickets are the only tickets than can officially be resold and some go for hundreds of pounds, depending on the order of play that day. The emergence of British teenager Raducanu, who won the US Open on her debut last month, is set to spark even more interest than usual.

The last debenture issue for Wimbledon’s second biggest showcourt was oversubscribed, with Hewitt saying there is a “a high level of interest,” in the current issue, which will run from 2022 through 2026. Existing debentures holders have a first right to renew, with the remainder going to ballot if demand outstrips supply. The net proceeds of the sale, estimated by Hewitt to come in at between £45-£46 million,  will be spent on its existing tournament grounds and facilities and the expansion of its site.

Here are the highlights of the interview, which was conducted via video call:

Ian Hewitt: “The first point is, you’ve got to compare like-for-like. The material difference compared with the last debenture issue is firstly that we have the roof obviously now for all five years, whereas for the previous issue it was only for three of those five years. And secondly, there will be the extra day, the Middle Sunday from next year. So it will be for 11 days rather than ten.”

“And with other sporting events, the economic context, we still aim to price at what we would regard as a fair value. And we would hope that obviously there is an after market which can go up or down, but we want them to be a fairly sound financial investment, although our primary purpose is to price at a fair value for those tennis fans who wish and can afford top quality seats and top quality services and a guaranteed time seat for five years.”

Are you already sensing an ‘Emma Raducanu effect,’ where people are scrambling for tickets?

Ian Hewitt: “When we reflect, we think over the past two years, No 1 Court in itself has acquired a bit of a reputation for the court where rising stars can be seen. Obviously, Emma Raducanu played her third and fourth round matches there this year. Carlos Alcarez played there a couple of years ago. In 2019, Coco Gauff made her breakthrough against Venus [Williams]. So there is that rising star element, plus we hope some excitement following the US Open.”

“I don’t think that materially went into the pricing decision, but we hope that it conveys some excitement in the tennis world at the moment and for fans to see the top tennis next year.”

In general, how important is it for you as a club, with the annual Championships, that a British woman has won a grand slam singles title?

Ian Hewitt: “It’s very exciting, isn’t it? I think we were entering a phase where there are a number of exciting up and coming players in the women’s draw that’s becoming more open. It’s becoming more interesting. But there’s no doubt that the excitement of a young leading British player has already added huge excitement. And we hope very much that that will be carried through to next year. I think it was an exciting Championships this year in its own right, but there was a good spirit about it. It was the first major sporting event back with capacity crowds. And we hope that the excitement will be carried into next year and hopefully the success of Emma Raducanu has undoubtedly fueled that interest.”

What happened to debenture holders when the Championships were cancelled last year – for the first time since WWII?

Ian Hewitt: “We voluntarily refunded debenture holders with one-fifth of the premium that was paid, and it was one year out of the five, which we refunded. In prospector’s terms, there’s no commitment to do that were it  to happen again, but we would obviously want to treat debenture holders as fairly and right as we could. And that’s what we felt was right last time. And that’s what we did.”

And you would probably do so in case of a cancellation in the future?

Previously on FORBES: Taking A Look At Every Time Wimbledon Has Been Canceled, Including The 2020 Tournament

Buying a debenture seat is obviously an attractive  investment, particularly given the current volatility of global stock markets and extremely low interest rates?

Ian Hewitt: “I’ll leave others to advise financially, but we do want to pitch it at a level where it’s not off-putting and there is a reasonable level of reassurance. We see the debentures primarily as for tennis fans, but we’re obviously alert to it being a reasonably reassuring financial instrument as well. We do offer an official market where we can buy back individual tickets if they’re not being used. But there is obviously a secondary market in any event. But pitching at the right level is one of our challenges.”