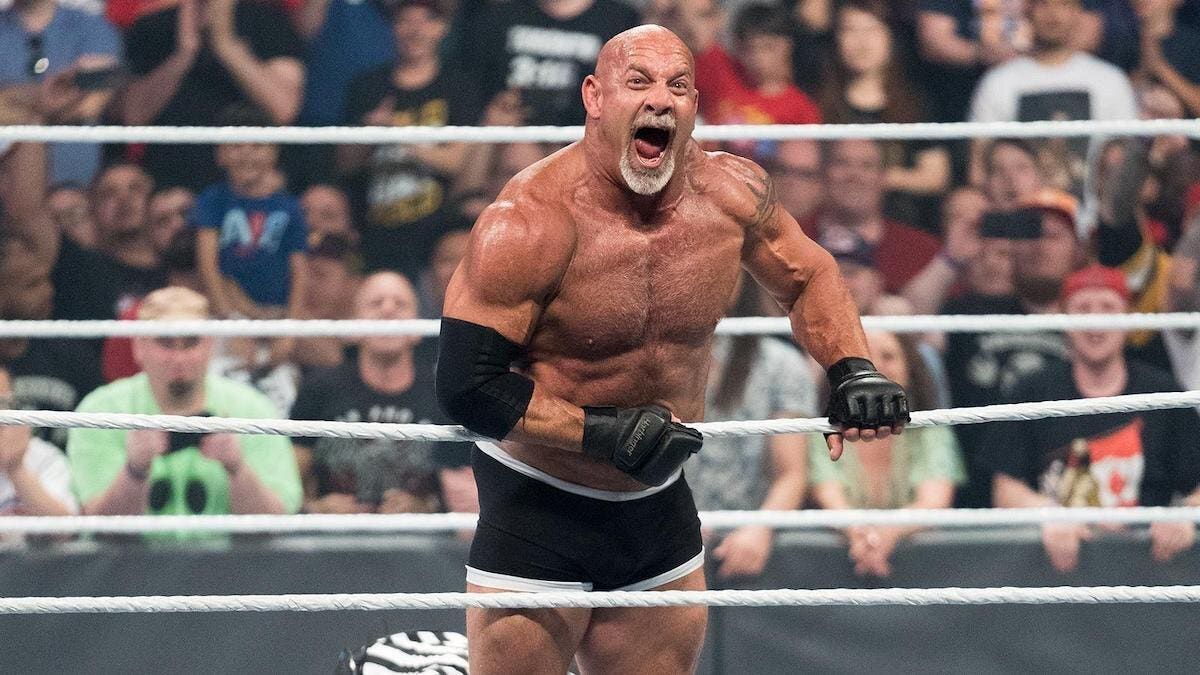 Goldberg returned on WWE Raw as the WCW legend and WWE Hall of Famer was rumored to return to challenge Bobby Lashley for the WWE Championship at SummerSlam 2021 in Allegiant Stadium. Coming off Money in the Bank 2021, where Lashley obliterated Kofi Kingston in a one-sided squash match, Lashley is set for a clash of the titans against one of the biggest box-office draws in pro wrestling history.

Lashley advertised an Open Challenge on Raw, which was answered by a returning Keith Lee, who was all but squashed by Lashley similar to his aforementioned victory over Kingston.

Lashley’s celebration was cut short by a surprise return of Goldberg, who was cheered overwhelmingly by the Dallas, Texas crowd. Goldberg emphatically screamed “I’m next!”

WWE Raw also featured the return of John Cena, who opened the show, in addition to the debut of NXT champion Karrion Kross amid fallout from Money in the Bank 2021.

As will be the case with every live event moving forward, WWE’s still-stacked lineup of potential surprise returns will add a more intriguing dynamic to the product in its build to SummerSlam.

WWE Raw viewership was up 9.31% with 1.609 million viewers for the final WWE broadcast from the ThunderDome.

John Cena is a full-on babyface and for the second night in a row there were no “Cena suck” chants to speak of except for the ones he clearly heard in his head.

John Cena called Roman Reigns an a-hole and was bleeped out despite the fact that this didn’t air on Peacock.

How does Roman Reigns being an a-hole give Cena the right to become No. 1 Contender?

The crowd seemed a bit confused about Cena and Riddle’s bro-off, however the fact that Riddle got the rub from John Cena speaks volumes about how WWE officials see him.

In a fitting upgrade, Morrison has added “America’s Moist Wanted” to his ring announcement.

John Morrison continues to be a revelation as one of the most popular stars of the restart era. Despite AJ Styles being in the other corner, this crowd quickly launched into “Johnny Drip-Drip” chants.

The air that Ivar got on his moonsault was highly impressive.

Riddle sprayed Omos with the drip stick and, thankfully, he didn’t even come close to selling it.

Even in a gimmick match, Elias vs. Jaxson Ryker was a risky move for what should be a highly rated Raw.

In what has become a running theme throughout the weekend, fans ate this match up despite complaints on Twitter of another Jaxson Ryker vs. Elias match.

This match really overachieved as these two made good use of the array of instruments and tables.

Charlotte Flair asked fans to look up #CharlotteFlair with no NSFW warning.

Flair was ready for the Becky chants as she noted that Becky was home breastfeeding. A savage line.

Rhea Ripley received a strong ovation from these fans, and after losing one big match after another to Charlotte Flair, I was pleasantly surprised.

The entrances were cut from television so there was no telling, at least initially, how these women were received by the Toyota Center.

These fans were either confused as to whom to cheer for or they simply didn’t care.

Reggie took a bump from Nia Jax’s headbutt, and proceeded to not sell it at all. Poor Reggie also had to endure chants of “Reggie sucks!” As soon as he was presented with a chance to win the 24/7 Championship, they chanted “Reggie!”

The announcement of Karrion Kross debuting on WWE Raw got a bigger reaction than either of these two, though Sheamus received sizable heel heat during a backstage segment.

With Damian Priest waiting in the wings, there’s no way Sheamus was going to lose this match.

Jimmy Smith referred to Damian Priest as “concerned” just as Priest was midway through a yawn.

Carrillo tried to punch Sheamus’ mask and (kayfabe) injured his hand, and he only has himself to blame.

Bobby Lashley and MVP get the distinct privilege of using the word “bulls—t” on television, and the third such instance came tonight from MVP.

It felt so good to see Keith Lee return in his home state of Texas, which showered him in cheers. Unfortunately, this match seemed like it was trending toward another non-finish, which plagued Keith Lee last time around.

Keith Lee’s honeymoon period was very brief as he was essentially massacred by Lashley almost as badly as Kofi Kingston was. I don’t get it.

Jinder Mahal announced today was his birthday, and that was a shoot.

Drew McIntyre hit poor Shanky no less than 20+ times with a steel chair, and the fans gleefully counted along.

Karrion Kross’ entrance was a shell of what it was in NXT, and he no longer has Scarlett in his corner, but a win over Jeff Hardy will immediately establish him as a Superstar to watch on this roster.

As promised, Jeff Hardy used his “No More Words” theme in his return to live crowds and received a rockstar reaction.

Karrion Kross losing his NXT debut makes no sense at all, especially with Jeff Hardy cheating to win. The man’s WWE career feels is over before it even started.

I was dying to see how this live crowd would receive Alexa Bliss’ Playground. As bad as it was this week, I’m not all the way sure they would boo this due to how over Bliss was last night.