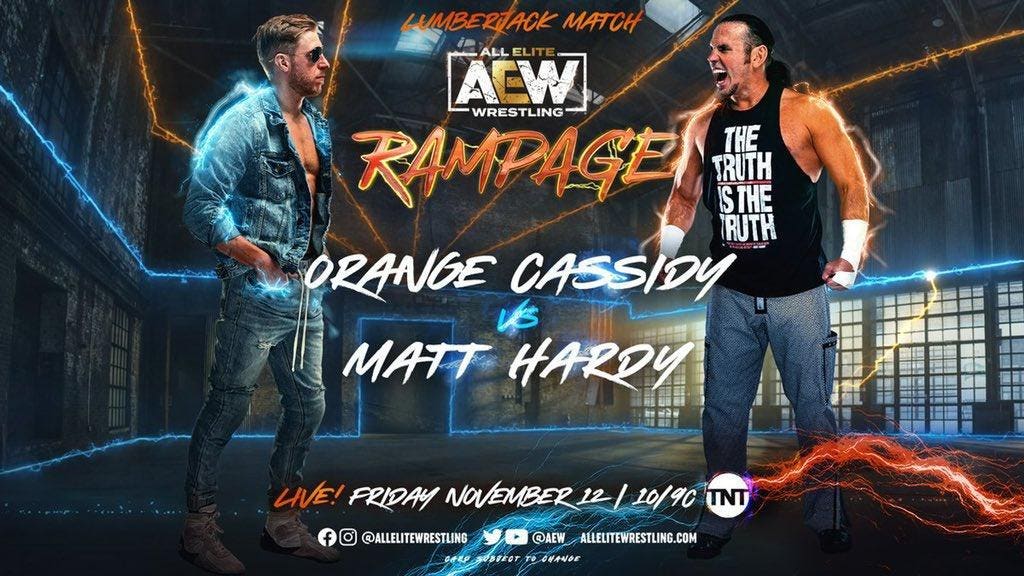 AEW Rampage from the Target Center in Minneapolis, Minn. advertised Jade Cargill vs. Santana Garrett, Jungle Boy vs. Bobby Fish and Orange Cassidy vs. Matt Hardy in a Lumberjack Match.

Last week’s broadcast of AEW Rampage was down with 599,000 viewers.

Jungle Boy and Bobby Fish had a few missteps throughout this match, one of which resulted in a scary landing for Jungle Boy, however this (accidentally) plays into the idea that Fish is a hired goon whose job is to take Jungle Boy out.

Chris Jericho brought to my attention that AEW ring posts have four corners as opposed to being rounded.

This was like a Tetsuya Naito-Kota Ibushi match where each wrestler was seeing how many times they could throw the other on their neck.

Santana Garrett was dressed like the third member of The Rockers.

This match was exactly what it needed to be with Santana playing to the strengths of Jade Stargill.

Both Dante Martin and Ariya Daivari are from Minnesota, so the Target Center was chanting “both these guys” and “this is awesome” before this match even got going.

As fun as this match was, my favorite part was the fact that Dante Martin was wearing a “Big Baller Brand” kneepad.

Team Taz came off like such heels trying to recruit Dante Martin while Lio Rush was home grieving with his family, and Excalibur astutely pointed that out.

Did Hook try to offer Dante Martin some of his potato chips in addition to the Team Taz contract?

Ever the carny, Big Money Matt offered $20,000 to the first person who took out Orange Cassidy.

Matt Hardy beating Orange Cassidy was the one surprising finish on a Rampage where the entire show felt like a tune-up.