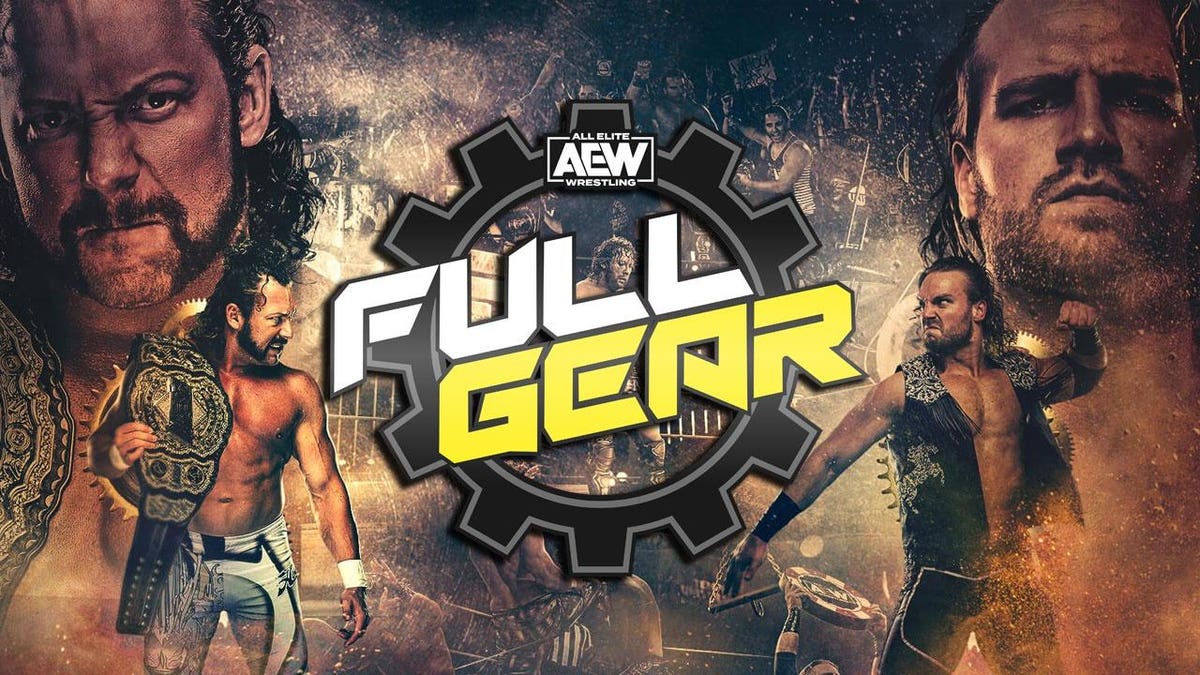 AEW Full Gear 2021 from the Target Center in Minnesota featured Hangman Adam Page challenging for the AEW World Heavyweight Championship in what is set to become his coronation. Full Gear also advertised Eddie Kingston vs. CM Punk following a heated exchange that drew immediate interest in a believable storyline.

MJF made sure to get in a headlock takedown, and Darby Allin popped right back up from it

Darby was like “A straight-up wrestling match? Bet. What are the craziest legal bumps I can take without killing myself?”

MJF winning this match is another sign AEW is getting heels ready for heavily favored challenger Hangman Adam Page.

The Lucha Bros are quickly cornering the AEW market on spectacular pay-per-view entrances.

This was the second consecutive match to feature a tribute to Eddie Guerrero on the anniversary of his death as Rey Fenix performed the Three Amigos followed by a Frog Splash.

There were so many great double-team moves in this match, yet Rey Fenix’s solo comeback still managed to steal the show.

After following a pair of hot matches, Bryan Danielson and Miro had to work extra hard to get fans into this match, but they eventually chanted “this is awesome!”

Bryan Danielson locked in the Label Lock and the announce team missed a golden opportunity to talk about how the move could affect Miro’s vulnerable neck.

The Young Bucks, flanked by a purple Brandon Cutler, walked out in bright purple gear, and of course Nick Jackson died his mustache purple. The look drew heat with Tony Schiavone before either man took a bump.

Adam Cole was bloodied early in this match, and despite being the heel, fans were not enthusiastic about seeing a bloody Adam Cole take a con-chair-to as it was being teased.

The Superkliq triple-team move took a dark turn when The Young Bucks put thumbtacks in Jungle Boy’s mouth and proceeded to double-superkick him.

This was the weakest Young Bucks pay-per-view match to date, however it’s such a high bar that this wasn’t necessarily a bad match.

Fans seem to be booing Cody Rhodes for the spectacle of it all, because they see other fans do it on television.

This was a passable match as Full Gear settled into a more laid-back vibe, however I’m just glad Malakai Black didn’t get pinned.

Tay Conti appeared to be doing a tribute to Bull Nakano with her hairstyle and facepaint.

This match overachieved, and based on the competitive rematch, I could see a rematch in their future.

Eddie Kingston hit a spinning backfist before this match even began, solidifying himself as the heel in this match. Not that it mattered, fans were split between Kingston and Punk and there were even several “Eddie” chants. Some fans were so conflicted they started the vaunted “both these guys” chant.

CM Punk did John Cena’s comeback as fans booed him, but instead of doing Cena’s “you can’t see me” taunt, Punk flipped off Eddie Kingston.

Somehow, Excalibur called Junior Dos Santos an undefeated pro wrestler with a straight face. Having said that, Dos Santos looked great in limited action and could be a promising pro wrestler if he puts in the time.

Dan Lambert didn’t tag in until Dos Santos did a number on Chris Jericho, and fans were so thirsty to see him get his comeuppance.

Andrei Arlovsky wasn’t asked to do much, but his spinebuster can use some work.

Dos Santos missed his cue in interrupting Jericho’s Lionsault, forcing Jericho to remain on the second rope for an awkward amount of time.

Jay Lethal announced he’s All Elite, and if he becomes the latest black talent to hit a glass ceiling then something’s not right in the universe or in AEW.

Jay Lethal challenged Sammy Guevara to a TNT Championship match Wednesday on AEW Dynamite. I’m not a fan of Jay Lethal walking into a match where he’ll be such a big underdog in Match 1.

This was the rare AEW match where fans were all behind the babyface while booing the heel. No split reactions, dueling chants or “both these guys,” that was featured throughout this show, this felt like fundamental pro wrestling at its core.

There were a peculiar amount of one-count nearfalls throughout this match.

The Young Bucks stood idly by as Hangman Page won the AEW World Championship, with Matt Jackson even nodding in approval. Very intriguing storytelling as AEW continues a slow burn to all original members of The Elite reuniting.