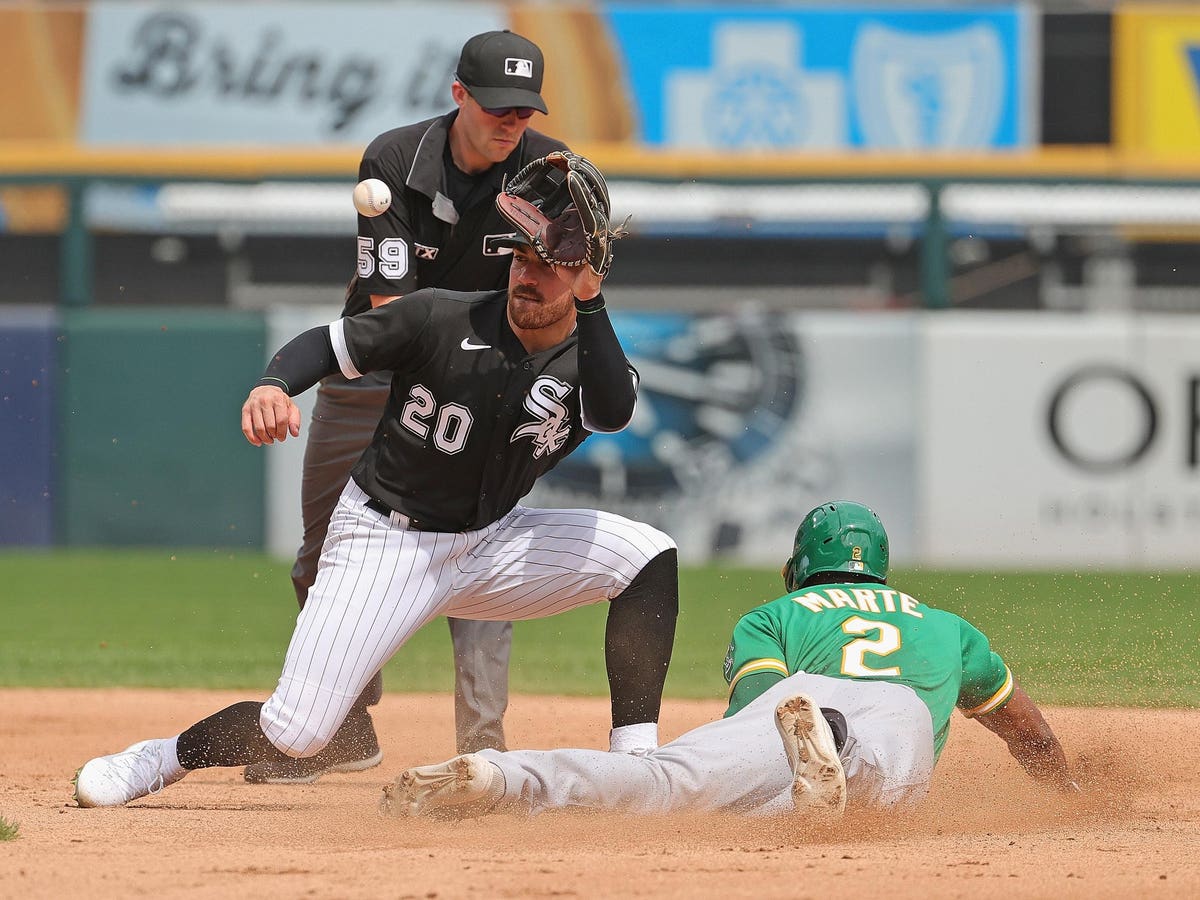 In a free agent market top-heavy with star shortstops, a center-fielder may turn out to be the biggest prize.

Starling Marte, who started 2021 with the Marlins but finished with the Athletics after a mid-season swap, is apparently coveted by at least a half-dozen clubs seeking an upgrade at the key position.

The list includes both New York teams, the Philadelphia Phillies, the Miami Marlins, and even the World Champion Atlanta Braves, all of whom have an obvious need in center field.

According to the website MLBTradeRumors.com, Marte could wind up with a contract surprisingly rich in years and dollars for a 33-year-old player: four years for $80 million.

Marte hit a combined .308 with a .381 on-base percentage and .456 slugging average last year, when he led the majors with 47 stolen bases. He did his best work for the contending A’s, hitting .312 with 25 steals in 56 games. Only nine previous players since the advent of the 21st century have had at least 40 steals and an OPS+ of 130.

The Marlins parted with Marte only after he rejected a three-year, $30 million extension to his expiring eight-year, $53 million contract. A free agent for the first time, he stands head-and-shoulders over his competition in center field. Only Chris Taylor, most recently with the Los Angeles Dodgers, also plays that position, though not as well as Marte.

Marte also comes with a bonus: since he’s ineligible for a qualifying offer from the A’s, he will not be tied to draft-pick compensation from any team that signs him. Oakland, a low-budget club, would love to bring him back but is not likely to afford the new contract.

The Minnesota Twins, seeking a return to contention after dropping into the basement of the American League Central, see Marte as an upgrade over injury-plagued incumbent Byron Buxton, who had a flexor strain and broken hand last year and has become trade bait.

Three other American League clubs – the Toronto Blue Jays, Texas Rangers, and Seattle Mariners – have money to spend and could also enter the Marte sweepstakes.

The same can be said for the San Diego Padres, whose bid for supremacy in the National League West would be enhanced by the addition of Marte.

And don’t be surprised if the Boston Red Sox enter the bidding – essentially to prevent Marte from signing with the arch-rival Yankees.

The need for a center-fielder is most acute in the Bronx, where Aaron Hicks spent most of 2021 on the injured list with a wrist injury and 6’7″ slugger Aaron Judge was forced to spend some time filling the position on an emergency basis.

Things were just as tough in Flushing, where Brando Nimmo, better defensively in the corners, seemed uncomfortable in center. The Mets have been hurting at the spot since Juan Lagares played there from 2013-19 but his bat couldn’t keep up with his glove.

Just down the New Jersey Turnpike, the Phillies floundered with Odúbel Herrera last year and used him only after one-time MVP Andrew McCutchen couldn’t supply the necessary defense. Dave Dombrowski, the team’s president of baseball operations, said earlier this week that he would have the money for major free-agent acquisitions.

The Braves opened the season with blue-chip prospect Cristian Pache in center but ended the World Series with veteran Adam Duvall in the middle garden after also trying Ender Inciarte, Guillermo Heredia, and Joc Pederson, among others. Injuries and an inability to hit major-league pitching kayoed Pache, later a post-season replacement for Covid-positive Jorge Soler, but he could get another chance after a strong season at Triple-A Gwinnett.

Duvall, like Nimmo and McCutchen, profiles as a corner outfielder – and even won a 2021 Gold Glove for his play in right field.

Should Marte return to Miami, that would be a surprise. The payroll-conscious Marlins swapped him to for a young arm, Jesus Luzardo, but missed Marte’s bat, speed, and defense. In fact, the Marlins traded their entire starting outfield, which also included Duvall and Corey Dickerson.

Now, however, Miami general manager Kim Ng has indicated her priority is upgrading the outfield. In addition to Marte, Avisail Garcia and Nick Castellanos are potential free agent signees, according to multiple reports.

Marte broke into the majors with Pittsburgh in 2012 and was a National League All-Star four years later. A lifetime .289 hitter, he won two Gold Gloves and hit 126 home runs but never reached the World Series.