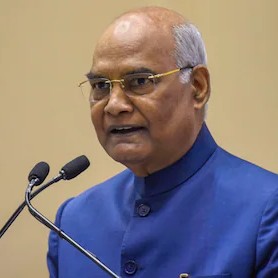 President Ram Nath Kovind on Tuesday asked educational institutes in the country to work together for the greater progress of the nation and also laid stress on promoting research in education.

Kovind was addressing a gathering during the centenary year celebrations of Punjab Engineering College (PEC) here.

The president also praised PEC for nurturing talent and creating the leaders of tomorrow as he recalled the contribution of eminent scientist Satish Dhawan, alumnus of the institute, for leading the country’s space programme. He said that last week, he had an opportunity to interact with all governors, lieutenant governors and administrators.

Kovind said that he always emphasised that as chancellors of the state universities, they should promote innovation and encourage research and development. “In this context, I would expect institutes like PEC and your competent alumni to act as mentors and collaborate with other universities of the country. PEC has students from all parts of the country, making it a perfect example of unity in diversity,” he said.

“If an institute can be the unifying factor for such a large set of students, I am sure mentorship from you all can definitely be the unifying factor for our country too. We have always followed the ideal of ‘Vasudhaiv Kutumbakam’ – the whole world is one family,” he added. Kovind said that it was desirable that different institutes and universities follow this principle.

“We need to work together, hand-in-hand, for greater progress of our country and make a knowledge network for the benefit of all students of our country,” the president said.

Talking about Punjab, he said that it has always played a pivotal role in the history of the country. “Be it as the hub of the Indus Valley civilisation or as the Sapta Sindhu region of the Vedic period, Punjab has made a mark since times immemorial. Being a border state of our country, it has been among the first to feel the social-political churnings caused by external influences,” Kovind said.

“What is most important is that it has been a prominent symbol of Indian culture and civilisation all over the world. Be it spiritual traditions or modern technology, achievements of this land are shining glories of our country,” the president added.

Kovind said PEC, a deemed university now, has evolved into a vibrant knowledge centre at Chandigarh, with hundreds of students receiving professional learning in different disciplines at this campus. “Its roots go back to December 9, 1921 when its foundation was laid as Mughalpura Technical College at Lahore by Sir Edward Douglas MacLagan,” he said.

The president said that Professor Satish Dhawan was an extraordinary scientist who led India’s space programme through rapid growth and spectacular achievements. “My esteemed predecessor, Dr A P J Abdul Kalam, considered him not only as a guru but also one of the three teachers in his life whom he held in the highest esteem,” he said.

Stating that PEC has always risen to the needs of the nation, Kovind recalled that in the early 1960s, when it was felt that the country needed the services of aeronautical engineers, the Indian Air Force had approached PEC. “It was in no time that the urgent need was met by shifting students from other disciplines of engineering into the final year of specialisation in aeronautical engineering,” he said.

The president also talked about the new National Education Policy (NEP) while noting that it encourages research and development. “Today, we are in an era when rote learning must be kept aside and the idea of research in education has to be promoted. Our new National Education Policy is a guiding light for all of us, as it encourages research and development,” he said.