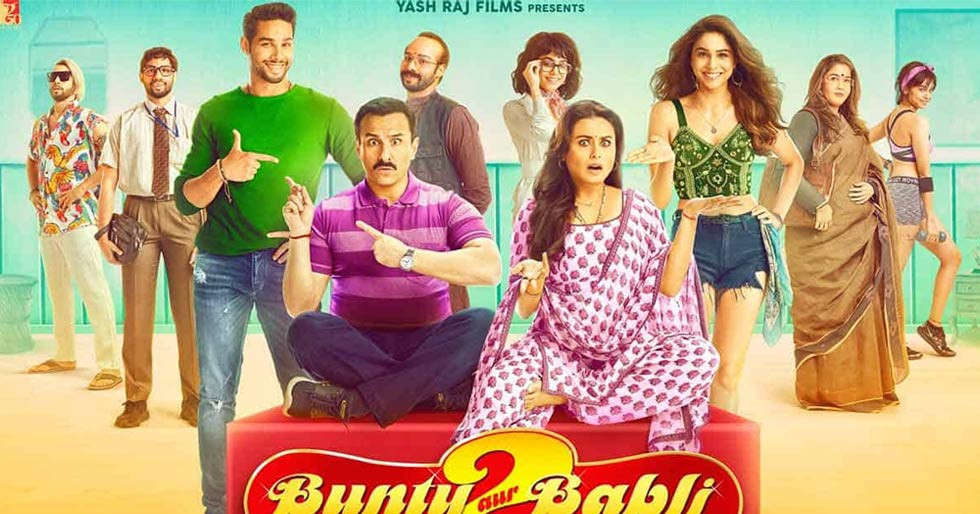 15 years have passed since Rakesh (Saif Ali Khan replacing Abhishek Bachchan) and Vimmi (Rani Mukerji) had their last con. They’ve devoted their lives to domestic bliss in Fursatganj. Rakesh is a ticket collector while Vimmi is a homemaker. It so happens that a new couple, engineering students Kunal (Siddhant Chaturvedi) and Sonia (Sharvari Wagh) take on the mantle of Bunty and Babli and start conning people on a grand scale. Inspector Jatayu Singh (Pankaj Tripathy) vows to catch them and unleashes the originals on their trail. It takes a crook to catch a crook, as they say, and thus begins a game of one-upmanship between the two pairs of crooks…

If one may recall, the original Bunty Aur Babli ended with Dashrath Singh (Amitabh Bachchan), coming back into the lives of Rakesh and Vimmi and asking them to become unofficial helpers of sorts to government agencies, using their knowledge to catch various fraudsters. So the possibility of a sequel was very much there. What’s surprising is that it took 15 years for it to evolve. Debutant director Varun V Sharma was given a gift-wrapped idea on a platter. But alas, he wasn’t able to do justice to this fabulous premise. The film starts off smoothly enough but later the story fizzles out. The director and his team of writers seem to be struggling to fit the various cons shown in the film into a coherent whole. Also, the progression from the original to the sequel too doesn’t seem natural. It all looks forced and the effort shows. While in the beginning, the disguises and the schemes of the new pair do bring a smile to your faces, the novelty soon wears off. And the second half starts looking like something from the Race franchise. You feel it’s been guest directed by Abbas-Mustan. We can’t comprehend how Rakesh and Vimmi, struggling with their middle-class existence, suddenly find the money to finance a layered con in the Gulf. The film goes into a tailspin in the second half and doesn’t come out of it till the end.

While Rakesh and Vimmi have a backstory, Kunal and Sonia have none. We know next to nothing about them and that’s bothersome. The laughs surprisingly come out of the constant bickering of the elder pair. Saif and Rani have appeared in a number of movies together and have an easy camaraderie going, which translated well into this film as well. Both play larger-than-life characters but we don’t mind it as they’re so good essaying their roles. You do miss Abhishek Bachchan but Saif has managed to give the role his own spin. You can see he’s enjoying playing a middle-aged conman who has got back into the game after eons and is loving every minute of it. The same can be said for Rani. She makes Vimmi come alive through her interpretation and one can very well say one’s watching an older, mature avatar of the fiery girl from the 2005 film. Rani has been doing tough cookie characters like Mardaani and its good to see her letting her hair down doing comedy.

Siddhant and Sharvari play their parts with confidence and share a crackling chemistry. They make an easy-on-the-eye pair that are just what the doctor ordered for the film. However, the haphazard script has let their efforts down. Pankaj Tripathy has wisely stayed away from filling the hallowed shoes of Mr Bachchan and given his own interpretation to the role of a dogged lawman. The pink goggles remain, but the rest of it is pure Pankaj Tripathy.


STORY: The infamous con couple Bunty and Babli decide to be back in the business to thwart the attempts of a young couple and bring them to justice, as they are swindling people in their name. But will the originals be able to outsmart the new scamsters on the block?

REVIEW: It’s been over 15 years since their last con and Rakesh (Saif Ali Khan) and Vimmi Trivedi (Rani Mukerji), once known as Bunty aur Babli are now living a regular small-town life in Phursatganj Uttar Pradesh. Rakesh is a railway ticket collector and Vimmi is a screechy middle-class housewife. Performing in loud and colourful clothes during festivities and occasions in their railway colony, is the only excitement in their otherwise routine life. But all of it is about to change as Kunal (Siddhant Chaturvedi) and Sonia (Sharvari Wagh) – two young engineering pass outs are now scamming people, using the all too familiar calling card of ‘B&B’ that represents Bunty aur Babli. For inspector Jatayu Singh (Pankaj Tripathi), the now ‘retired’ Bunty and Babli are the key to accomplishing his mission of nabbing the new fraudsters.
It’s a plot that is tailor-made for a sequel to cash in on the popularity of its original and take the story forward. However, debutant director and screenplay writer Varun V. Sharma struggles to seamlessly bring it all together. The film’s narrative focuses way too hard on force-fitting the references from the original that should have come organically. There are a couple of innovative cons and unrecognisable disguises, but the overall execution is far too juvenile to be able to take anything or anyone seriously. The first half is spent mostly in setting up the stage for the ultimate conflict and the story doesn’t really move at a solid pace. In the second half, the plot thickens but the lack of logic and conviction in the story and its telling doesn’t make us feel strongly for any of the characters.

A stellar cast of some seasoned artists and promising newcomers is let down by weak and sloppy writing. Still, it’s a delight to watch Saif Ali Khan and Rani Mukerji together, who go over-the-top with their acts but it is fun. The two actors show crackling chemistry despite playing a middle-aged couple dealing with regular domestic issues. Saif is quite adorable as the goofy and obedient Rakesh Trivedi while Rani’s comic timing is a saving grace even when she is saddled with a stereotypical loud character and very few genuinely funny lines or scenes. In fact, for a comedy this one’s very low on organic humour with just a handful of gags that actually land. Siddhant Chaturvedi plays his part well and Sharvari Wagh is very confident for her first film. They look good together. However, their characters have no backstory or a convincing build-up to make the audience connect with them. Pankaj Tripathi’s act of infusing humour in a rural accent is nice but we have seen it way too many times to find any novelty in it. The soundtrack doesn’t have any memorable songs like the original but thankfully there are only a few of them in the film.

All in all, ‘Bunty aur Babli 2’ had an exciting premise to revive the two iconic characters, but this sequel feels like quite a con-job in comparison with its original.