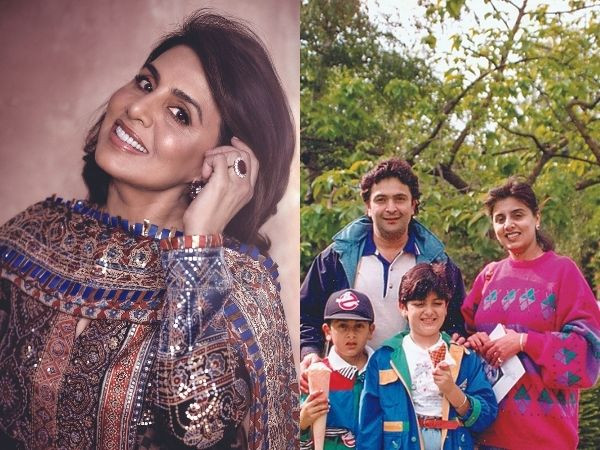 1
SHARES
0
VIEWS
Neetu Kapoor is all set to make a comeback as an actor in Raj Mehta’s Jug Jugg Jeeyo. She started life as a child actor, graduated to doing lead roles in films but left acting after marriage to be the emotional anchor to her husband, the late Rishi Kapoor. Later, she became a helicopter mom of sorts to Riddhima and Ranbir. Her children became her life. Her world revolved around them, making sure her kids were being brought up properly. Her routine changed somewhat after they grew up and started their own lives. Rishi Kapoor got diagnosed with cancer a few years back and she was there with him every inch of the way, helping him battle the disease. She lost him last year and then decided that one way to deal with her sorrow was to put on the greasepaint and face the arc lights again. In a straight-from the-heart interview, she narrates her struggles of becoming a full-time actor once more and also shares glimpses of what life was as a hands-on mother in an actors’ household.
You are starting life again as an actor with Jug Jugg Jeeyo. What difference did you find between then and now when you landed on the sets?
When I did those 70-80 movies, I was young and my mother used to accompany me. And then I did those two movies (Do Dooni Chaar and Besharam) with my husband. For me to agree to Jug Jugg Jeeyo took a lot because for the first time I didn’t have anyone with me. It was quite an experience. Also, my husband had passed away recently, so I was a bit shaken up inside. I needed something to make me feel stronger. I was anxious initially but gradually became used to the routine. And everybody made me feel better on the sets. Anil Kapoor, director Raj Mehta, Kiara (Advani), Varun (Dhawan), everyone was a pillar of strength. So, I relaxed after a few days. I’m glad I did the film.

How has your decision to come back to films changed your equation with your son Ranbir?
Actually, it has strengthened our bond. We’ve always discussed movies, actors, performances… We’ve always had that sort of a relationship. That’s our passion. I’m a total movie buff. I can watch the worst movies. Now, I also discuss my forthcoming projects with him. It’s a better bond now, because now I am discussing myself. Earlier we were discussing other people. He also discusses his films with me when he wants to, though he makes his own decisions. But once in a while he also wants my take on the script. So, we have that relationship of movies, scripts, performances and now it’s become even better. 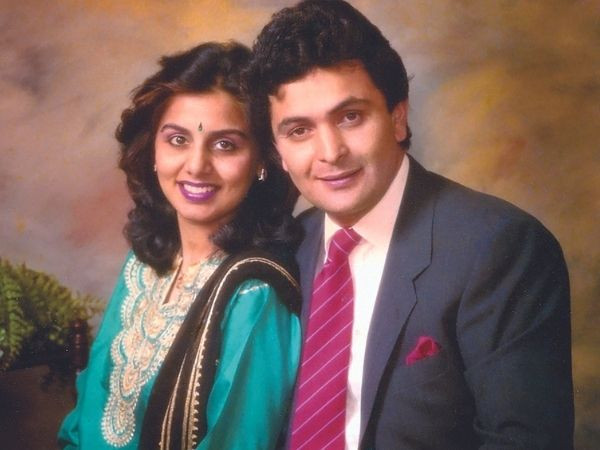 Are you spending more time with your children currently?
I want them to be busy with their lives. I say mere dil mein raho, mere sar pe mat chadho (stay in my heart, don’t sit on my head). When Riddhima was with me during the lockdown, I was so stressed for one year because she couldn’t go back. I used to get restless and tell her, “Go back, Bharat is alone.” I was literally pushing her away. I like my privacy. I’m used to this way of life. I remember when Riddhima was going to London to study I used to howl for days. If someone came to meet her to say goodbye,  I’d start crying. But when later Ranbir went abroad to study, I didn’t cry. He told me, “Mom, you don’t love me.” But it isn’t that. It was just that I had gotten used to living away from a child. So when it happened again, I was prepared. I think those times when they were abroad made me stronger and made me feel that I’m okay being alone. Also, they have to get on with their lives. I’m happy when they come, but I want them to go back to their homes and be settled. I just say one thing — don’t meet me every day, but stay connected. I don’t want them to be around me all the time. I’m independent that way. I love my life the way it is.

How different are Riddhima and Ranbir from each other?
Riddhima is a hands-on daughter. She goes crazy worrying over me even if I cough a little or if I say I am tired. She will send hazaar messages, she will give me all her home-made cures, she will chew my head because she wants her mother to be okay. Ranbir is different, he is more on the quieter side. He will be worried, but he’ll just ask me, “How are you doing mom, are you okay?” Ranbir’s one call or message just makes me feel better, whatever I am going through. They all have their own things to make me feel good. 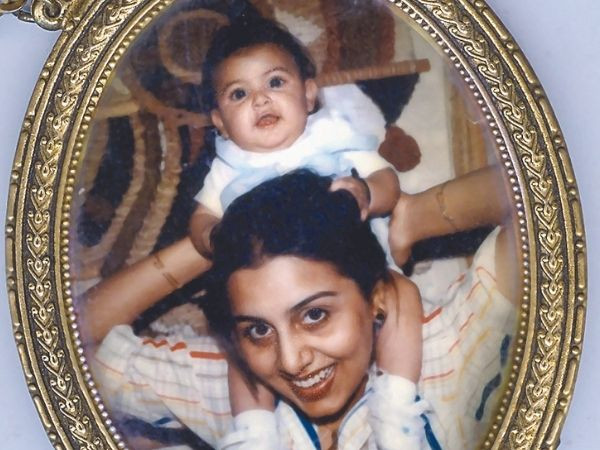 What’s your fondest memory of Riddhima and Ranbir from their childhood?
For a mother, her children are her world. For me every day is a memory. Ranbir had just started earning.He was an assistant director in Black  and he had made some money. It was Mother’s Day and he took me to a restaurant called Just  Around the Corner. It served lunch for Rs 100. So that was my best Mother’s Day memory as we stood in a line with a plate and I saw everyone was piling up their plate with food as you could fill it only once. And I was the proudest mother that day, as that was the first ever lunch my son had taken me out for. Riddhima was studying in London and she started doing some part-time jobs. I went to meet her during one of her vacations and when I landed at Heathrow, a limousine met me. It had flowers and champagne and she had arranged it all with her own money. I called her up and said, “Riddhima, are you crazy, such a big champagne bottle at 11 am?” She said, “I just wanted to do the best for you.” I stayed with her in her apartment and she had all these beautiful cards all over with ‘welcome to my home’ written on them. They always asked me as children — “Whom do you love more?” I used to say I love Riddhima two years more because she is older. Both are special to me, but because she came earlier, I loved her two years more. 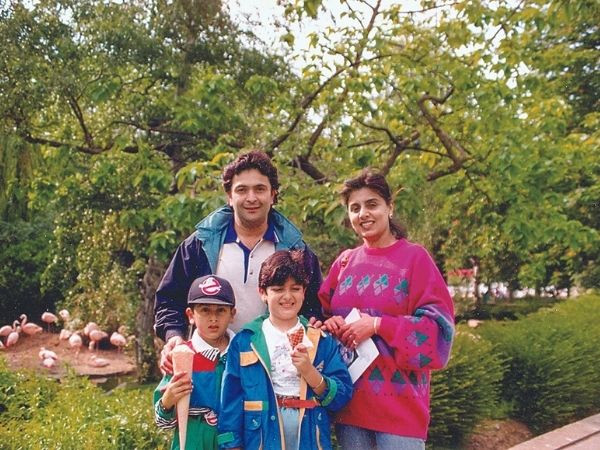 What were the changes that came into your life when you became a mother?
I was so obsessed with my kids that I forgot about the world for the first 10 years. I used to drop my children to school, pick them up myself — I was that crazy. I had to be home when they were there. I had to make something special for them. Ranbir loved butter chicken, so I made sure that my butter chicken was the best. In the process I lost a lot of friends, but then I reconnected with them later on, of course. Once a year we would go to Kashmir or somewhere for vacation. Or when Rishi was shooting on some hill station, we used to accompany him. Those days Switzerland was very much in fashion. Everyone was shooting songs or movies there. And every time we went for dinners, my husband would play a game with them, like fastest finger first. He was busy doing films but whenever he was free, his time was devoted to his children.

Star kids supposedly get everything on a platter. Were you a strict mom or did you give in to their every demand?
Ranbir was obsessed with GI Joe toys. When he became a little older, he wanted a bike, then a car. My husband said no to the car, because he did not want to spoil the children. He finally got a car when he was 18 or 19. Riddhima wanted to highlight her hair at one point and I said no way. She was also about 15 or 16. She wrote me a long letter, saying mom this is the only thing I want in life, I will never ask for anything ever. I did not believe in highlights, because I thought it’ll spoil her hair. Many times when they wanted something and because I did not want to spoil them or my husband did not want to spoil them, we would say no. When Ranbir was an assistant director on Black, his father told him to go to work by an auto or a bus as that’s what other ADs would do. I never bought Riddhima a designer bag. Because how will they value what they get in life or from their partners, if you spoil them when they are children. Today she values it when Bharat buys her something. Ranbir had to go to America on these long flights travelling economy. He used to say, “Mom, my legs go numb.” The only thing I used to make sure then was to buy him an aisle seat. So at least he could stretch his legs. I think these things are important. We wanted them to learn the value of life, value of money. That helped them in the way they are today.

One thing you wish you would have done differently as a mother…
I became a mother at 22. Sometimes I screamed at them when I was angry. I now understand that if a child is behaving in a different way there has to be an issue. Don’t scream, get to the bottom of it. I analyse things now. I don’t get upset or don’t get angry with them. I feel one should have children at a later stage, when you are more calm. 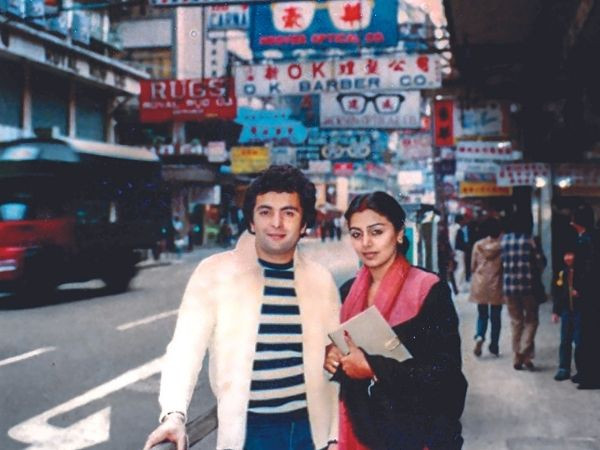 David Warner Poses Like Akshay Kumar from ‘Hera Pheri,’ Asks Who Did it Better

David Warner Poses Like Akshay Kumar from 'Hera Pheri,' Asks Who Did it Better