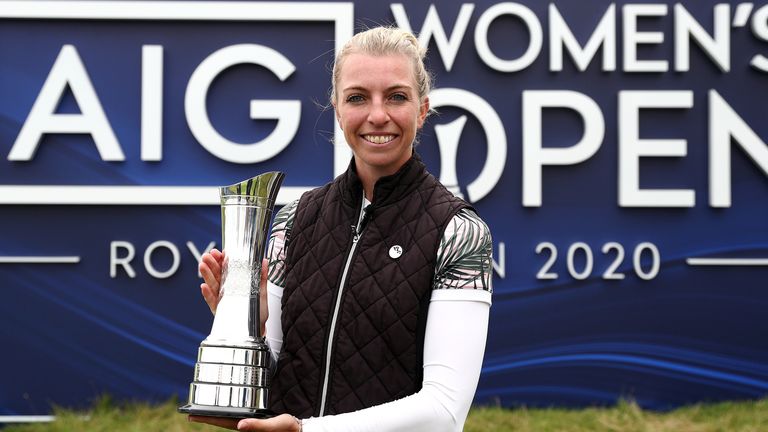 World No 1 Nelly Korda heads an international field of more than 75 champions at the AIG Women’s Open at Carnoustie; watch the final women’s major of the year throughout the week live on Sky Sports Golf YouTube channel.

The women’s golf major season reaches its climax this week at the AIG Women’s Open, with all four rounds available to watch for free via Sky Sports Golf’s live YouTube stream.

Sophia Popov returns as defending champion after her breakthrough major success in the 2020 contest, with a world-class field assembled at Carnoustie for this week’s event.

World No 1 Nelly Korda arrives in Scotland looking to build on her remarkable season, in which she has won Olympic gold and three LPGA Tour titles – including a maiden major victory, with Lexi Thompson and Danielle Kang among the other notable American names in action.

2018 champion Georgia Hall is one of 11 English hopefuls in the field, with Charley Hull and Mel Reid among the others featuring, while five Scots aim to impress on home soil. Ireland’s chances are spearheaded by Leona McGuire and Wales represented by Chloe Williams.

This week’s event is the last in the Solheim Cup qualification campaign, giving European hopefuls one last chance to impress captain Catriona Matthew before she selects her captain’s picks for next month’s contest in Ohio.

Sky Sports is broadcasting extended live coverage from all four rounds, with seven hours of live action starting from 11am over the first three days and midday on Sunday for the final round.

The tournament is part of a triple-header of live golf on Sky Sports, with The Northern Trust – the opening event of the PGA Tour’s FedExCup Playoffs – and the European Tour’s Czech Masters also available to enjoy this weekend.

Click on the stream above to watch live coverage from the AIG Women’s Open!