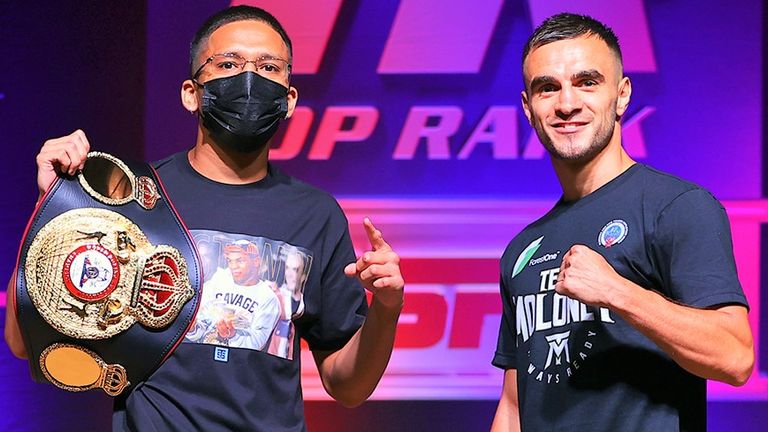 Andrew Moloney taunted Joshua Franco by insisting ‘the whole world’ knows he should be champion before they reignite their rivalry in a trilogy fight.

The super-flyweight duo will finally settle their heated dispute in this weekend’s WBA title clash in Tulsa, with coverage starting from 3am on Sky Sports.

Moloney reacted in disbelief after his rematch with Franco ended in a ‘no decision’ verdict when the referee ruled that a swelling on the Texas fighter’s eye had been caused by a headbutt, despite a 30-minute video review last November.

“I know Franco is going to be more determined this time around after the criticism he’s copped since that last fight and the whole world knowing that I should be the champ right now,” said the Australian.

“But I’m coming even more determined with more to prove, and as I said, I’m doing this for my family and this is going to be a great night and I’m going to come out with that belt like I should have.

“I know 100 percent deep down inside there was no headbutt. The whole world knows there was no head clash, and if you watch the replay, you’ll see at 1:36 left in round one, I land a jab that shuts his eye. I knew that on the night, and I’m even more sure of it now.”

Franco had floored Moloney in their first fight while claiming the WBA belt with a unanimous decision win and intends to clear up any controversy with an emphatic win.

“Winning this fight and making the statement I want to make will open up bigger doors for me,” said Franco. “There were no issues at camp. Camp went very well, very good, so I’m ready to go.

“Expect a great fight, a great show, fireworks, and expect for me to make a statement Saturday night.”

“[The second fight] was only two rounds. Two rounds don’t really show much. To me, the fight was going the same way as the first fight, but that’s why we’re making the third fight, to take care of business. I’m ready for that. “

Nico Ali Walsh, grandson of Muhammad Ali, will also make his professional debut on the Franco vs Moloney bill.

“I feel like everyone puts this pressure on me because of my grandfather being who he was, but to me, it’s just my grandfather,” said the 21-year-old who faces Jordan Weeks.

“To everyone else, it’s the Greatest of All Time. I believe that too, but to me, it’s just my grandfather. I think he’d be most excited that I’m being promoted by Bob Arum and Top Rank.

I know my grandfather is a pretty special person to a lot of people.

“The tradition of Arum promoting my grandfather to now promoting me is pretty amazing, so he’d have a lot to say about that. It’s been amazing.

“I’m not surprised with the attention. I know my grandfather is a pretty special person to a lot of people.

“It’s pretty good hearing all the stories, knowing that my grandfather has so much love and admiration and people are carrying that onto me. That’s great, but it doesn’t affect my preparation.

“I would be training the same if I was Joe Schmo on the street.”

Watch Joshua Franco vs Andrew Moloney, from 3am on Sunday, live on Sky Sports.