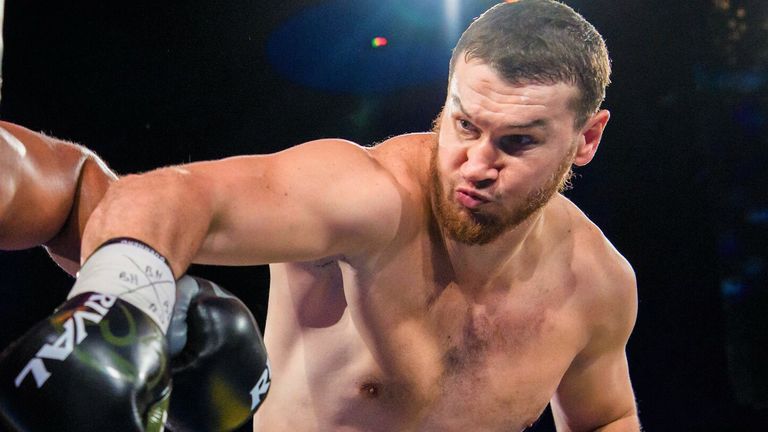 Arslanbek Makhmudov is the “most feared heavyweight in the world” and his knockout power could put “anyone to sleep”, says his promoter Camille Estephan.

The unbeaten Russian, nicknamed ‘The Lion’, resumed his destructive pursuit of a world heavyweight title fight by dispatching Pavel Sour in just over 30 seconds in Mexico last week.

Makhmudov has broken the resistance of all 11 of his opponents, with only one bout lasting beyond three rounds, and promoter Estephan insists that his fighter’s concussive punches will topple any heavyweight.

“I believe Arslanbek has the type of punch that is not just heavy but quite explosive. Truly the kind of punch that could put anyone to sleep,” Estephan told Sky Sports.

“Arslanbek will defend his NABF title at the end of September and we’re looking for the titles and all the roads that lead to the world titles, which is our ultimate goal.”

Makhmudov issued a warning to the current world champions, Anthony Joshua and Tyson Fury, but has raised doubts about whether his rivals want to share the ring with him.

“It’s been 10 months since I got in the ring because there aren’t a lot of boxers who want to face me,” said Makhmudov.

“I am ready to face anyone. My goal is to become heavyweight champion of the world and I want to face the best in my division.”

Joshua defends his WBA, IBF and WBO titles against Oleksandr Usyk on September 25, live on Sky Sports Box Office, while Fury’s WBC belt will be at stake in a rescheduled third fight against Deontay Wilder on October 9.

With Joshua and Fury holding all the belts, Estephan believes Makhmudov would welcome the opportunity to stake his claim for a title shot with a devastating win in Britain.

“So much action in the UK at heavyweight that we are certainly open to fight there,” Estephan told Sky Sports.

“We think he’s ready. It’s a matter of making it through the ranks. Arslanbek is not the type of fighter who is likely to be invited by one of the champions.

We believe Arslanbek has a punch that could make the Wembley stadium tremble so we are more than sure most heavyweights already fear him.

“Currently we say he’s the most feared heavyweight in the world.

“We believe Arslanbek has a punch that could make Wembley Stadium tremble so we are more than sure most heavyweights already fear him.

“His quest for the titles will be quite a journey and once he gets to the top of the pride as champion we think he will be the ‘King of the Jungle’ for a long time.”