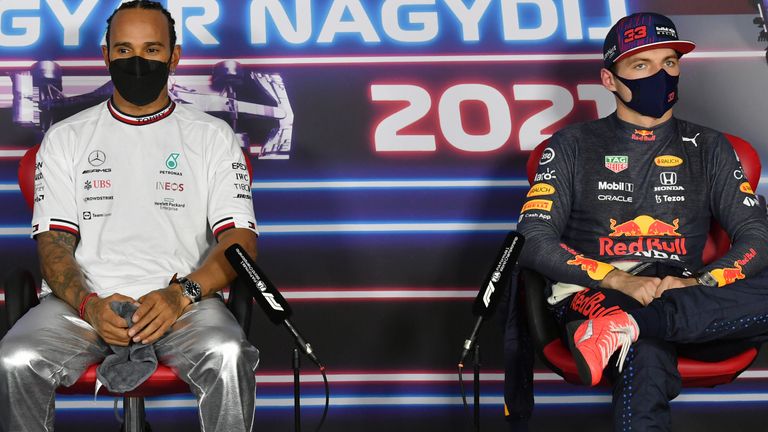 This weekend’s Belgian GP opens what is set to be a very busy concluding second part of the season; assessing the tense championship’s state of play, the latest on the rest of the race calendar, and clues on when the rest the 2022 driver puzzle might fall into place

That’s all that separates Lewis Hamilton and Max Verstappen as one of the most captivating world title fights in recent Formula 1 history prepares to resume at Spa-Francorchamps this weekend.

An eight-point difference after 11 races completed represents the closest gap between a championship’s top two since 2016, when there were six in it at that point of a similarly tense duel between then-Mercedes team-mates Hamilton and Nico Rosberg.

There haven’t been such a few points in it between drivers from different teams for more than a decade (and that was under a different points system).

Verstappen’s advantage on July 17 after Saturday’s inaugural sprint race at Silverstone had stood at 33 points. Yet the outcome of the two tumultuous race days since mean what was the Dutchman’s advantage is now a deficit.

“I am of course excited to go back to Spa,” said Verstappen. “It’s my favorite track and it’s really cool to drive with so many high-speed corners and elevation changes

“I’m also looking forward to seeing all the fans who will be coming to support us, and it will be cool to see so much orange in the grandstands again as they couldn’t be there last year.

“I also think it is a good place to reset our championship fight and I’m well prepared and feeling good ahead of the weekend.”

The championship race is similarly close between the rivals’ teams too: Mercedes are just 12 points clear of Red Bull having overturned their own deficit in the final two races before the break amid misfortune for their rivals.

Mercedes boss Toto Wolff has said: “We lead both championships and the W12 feels in a better place, after the upgrades introduced at Silverstone and an encouraging showing in Hungary.” But we know there is a long road ahead and so much can still happen in this season of ups and downs.”

How many races – and points – are left up for grabs?

A question that is likely to take a few more weeks to definitively answer as F1 continues to monitor the global situation around Covid-19 and adapt its plans accordingly.

Ostensibly there are 12 races of the season left, giving a record haul of 23, although the recent cancellations of the Japanese and Australian rounds mean only 10 of the events are currently listed.

What does the rest of the F1 calendar currently look like?

F1 is understood to have plenty of fall-back plans and the option to remain flexible around countries such as Turkey which are currently on the government’s travel ‘red’ list, with the possibility of different onward destinations rather than the need to directly return to the UK. The latest government update on those travel lists is expected this week, incidentally.

The season is due to finish in Abu Dhabi on December 12.

Are there any more Sprint events?

Two more are expected and the first of those is formally locked in for the Italian GP weekend at Monza, in two weeks’ time.

It’ll follow the same format as Silverstone, with qualifying on Friday evening, the short sprint race on Saturday, followed by the usual Grand Prix on Sunday.

Should it take place, then the Brazilian GP in November has been mooted as a likely third venue for this season’s sprint trials.

What else is there to look out for on the calendar?

It has taken almost 18 months longer than originally anticipated due to the pandemic, but Verstappen’s ‘Orange Army’ finally get their home Grand Prix next week at heavily-revamped Zandvoort.

Only 11 circuits have actually staged a Grand Prix more often than the Dutch circuit in Formula 1’s history, yet next week will be the sport’s first visit to the venue on the North Sea coastline since 1985.

Heavily reprofiled since F1’s last visit there, the event will run to two-thirds capacity of about 70,000 on race day.

Meanwhile, in December, Formula 1 will visit Saudi Arabia and Jeddah for the first race around what is being billed as the fastest street circuit in the sport’s history, when cars will average speeds of 155mph around the lap.

What’s happening in the driver market?

Numerous teams and drivers indicated going into the break that they hoped their respective 2022 plans would become clear and, in many cases, confirmed by the time the season resumed at Spa this season.

As yet, any agreed deals have yet to be formally announced, although the sense is that’s unlikely to remain the case for long over the course of the upcoming Belgium-Netherlands-Italy triple header.

In an interview with build, Mercedes team principal Wolff suggested September – and so not this week in time for Spa – as the month where he wanted the identity of Lewis Hamilton’s 2022 team-mate, Valtteri Bottas or George Russell, to be decided. That key decision is set to have further implications for who ends up where further down the field too, certainly at Williams and possibly at Alfa Romeo too.

Of the teams where the status quo is expected to be maintained, Alpine’s Fernando Alonso on Wednesday teased an imminent announcement of some kind via a coded Twitter message, later entangled by his online followers, as the Enstone outfit’s social media account and team-mate Esteban Ocon also joined in the cryptic clues.

At least half the seats on the grid are still to be confirmed for 2022 and the first year of the F1’s technical rules revolution.