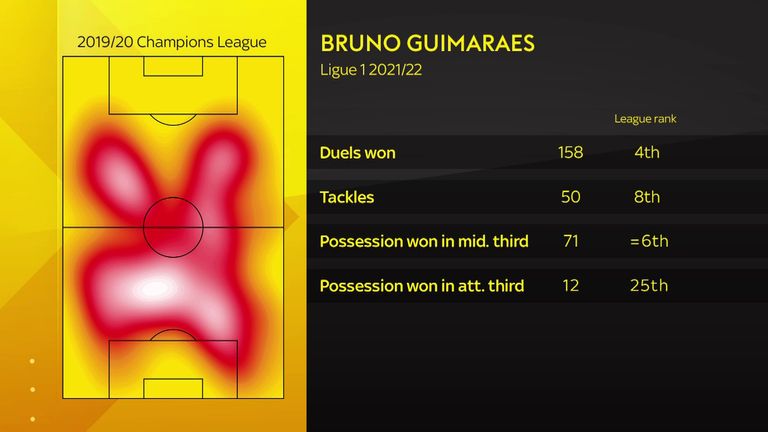 With the clock ticking down to Monday’s transfer deadline, Newcastle United are closing on Bruno Guimaraes, a midfielder with all the attributes to spearhead the Magpies’ push for Premier League survival.

Sky Sports News understands Newcastle have reached an agreement with Lyon to sign the 24-year-old Brazil international for £30m, although the Ligue 1 club have released a statement to the contrary.

While the finer details may yet to be finalised, Sky Sports’ Jack Wilkinson explains why the qualities Guimaraes would bring to Eddie Howe’s squad at St James’ Park are not in question…

‘Lyon won’t give up Guimaraes without a fight’

You need to look no further than Lyon’s forcefully-worded statement to see just how highly the Ligue 1 club rate Guimaraes – and why they are not prepared to lose the midfielder without a fight.

Guimaraes moved to Lyon in January 2020 and went on to play 295 minutes in their run to the Champions League semi-finals, as the French club famously beat Italian champions Juventus and then English champions Man City before being knocked out by eventual winners Bayern Munich in the last four.

Guimaraes’ heatmap from that Champions League campaign illustrates he is a defensive midfielder by trade, but also a player with the attributes and hunger to venture forward whenever the opportunity arises.

In addition, his combative qualities have been right up there with the best in Ligue 1 this season, where he ranks fourth for duels won, eighth for tackles, and is joint-sixth for possession won in the middle third.

Guimaraes ranks 25th for possession won back in the attacking third, an impressive additional quality for a defense-minded midfielder who speaks volumes for his ability to press all over the pitch.

The box-to-box brilliance of Guimaraes

Guimaraes, who has been capped three times at international level by Brazil, comes into his own when his attacking qualities are examined. Not limited to merely carrying out defensive midfield duties, he is as effective in the opposition half and attacking areas, if not more effective.

The ability to find defense-splitting passes is illustrated by his high number of completed passes and chances created, while Guimaraes’ fouls won, and touches statistics show there are few more effective carriers of the ball than the Brazilian currently playing in France.

When you combine Guimaraes’ attacking and defensive qualities it’s clear Newcastle have identified a midfielder with genuine box-to-box qualities, a rare find at the best of times, let alone during a notoriously difficult January window which could be the difference between Premier League safety and relation. 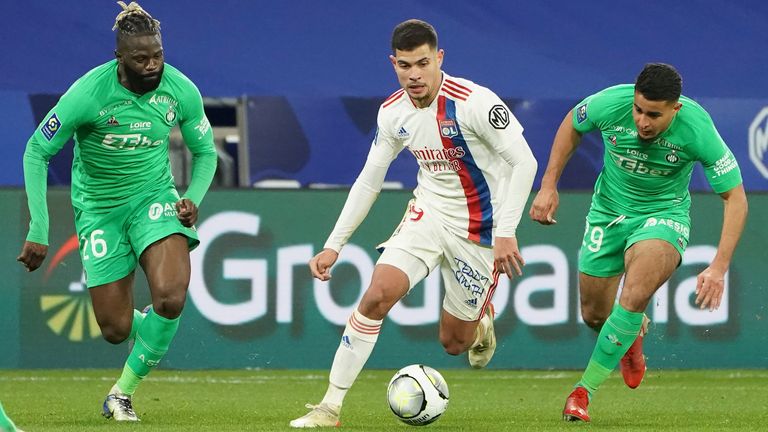 Amid transfer speculation around Bruno Guimaraes, The Transfer Show discuss which club the midfielder could end up at

Who will be on the move in January?

The January transfer window opens on Saturday January 1, 2022 and closes at 11pm on Monday January 31,

Keep up-to-date with all the latest transfer news and rumors in our dedicated Transfer Center blog on Sky Sports’ digital platforms. You can also catch up with the ins, outs and analysis on Sky Sports News,

Follow every Newcastle game in the Premier League this season with our live blogs on the Sky Sports website and app, and watch match highlights for free shortly after full-time.

Want the Newcastle latest? Bookmark our Newcastle news pagecheck out Newcastle’s fixtures and Newcastle’s latest resultshandjob watch Newcastle goals and videokeep track of the Premier League table and see which Newcastle games are coming up live on Sky Sports,

Get all this and more – including notifications sent straight to your phone – by downloading the Sky Sports Scores app and setting Newcastle as your favorite team.

Hear the best Premier League reaction and expert analysis with the Essential Football and Gary Neville podcasts, keep up-to-date with our dedicated Transfer Centerfollow the Sky Sports social accounts on Twitter, Instagram and YouTubeand find out how to get Sky Sports,