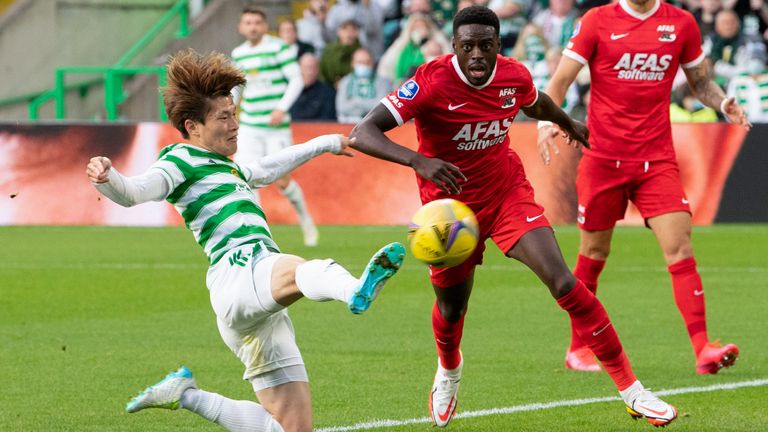 The Japan forward settled Celtic’s early nerves after a brilliant assist from Tom Rogic, and James Forrest netted a deflected second-half goal to ensure his side take a decent lead into the second leg of the play-off.

Celtic were denied a late third amid a dramatic goalmouth scramble but the Dutch side showed enough going forward to suggest the return leg will be far from a formality.

The victory made it five in a row for new manager Ange Postecoglou, who brought in the fit-again Liel Abada for Odsonne Edouard. There was no place for Leigh Griffiths among the 11 substitutes.

The visitors had an early penalty appeal but Zakaria Aboukhlal went down very easily amid the attention of Stephen Welsh.

Celtic had a bigger let-off when AZ skipper Teun Koopmeiners broke down the right and crossed for Vangelis Pavlidis, whose shot seemed destined for the net only for Joe Hart’s toe to divert it off the inside of a post and into the goalkeeper’s hands.

Rogic appeared immune to the early shakiness affecting many of his team-mates and he almost put Furuhashi away with a searching through ball before setting up the Japan forward for the opening goal in the 12th minute.

The Australian shimmied his way to the byline and crossed for Furuhashi to show his agility and volley home from close range.

Celtic pushed for a quick second. Abada and Rogic forced a double save and the same pair both had shots blocked after good wing play from Anthony Ralston.

Rogic continued to thread passes and almost got Forrest and Furuhashi in behind. The Scotland winger soon came close with a curling effort that was clawed away from the top corner.

There were still occasional threats from AZ and Hart made a good diving stop from Aboukhlal after Carl Starfelt had given the ball away. A Welsh header and long-range David Turnbull strike were off target before half-time.

Cetic also had a major reprieve early in the second half after Starfelt failed to cut out a through ball. Welsh snuffed out the initial danger with a sliding challenge and Thijs Oosting shot over from eight yards after the loose ball fell perfectly for the left-back.

Celtic soon went two up in the 61st minute. Furuhashi played the ball into Forrest, who had his back to goal but managed to get in a shot that took a major deflection off Timo Letschert and wrong-footed the goalkeeper.

The noise levels went up further as the home support enjoyed the two-goal cushion, although there was a moment of silence before Ralston further enhanced his burgeoning reputation with a sliding clearance in the six-yard box.

Rogic came close to the goal his overall play deserved with a long-range strike that was pushed over the crossbar.

The Australian and Furuhashi were replaced by James McCarthy and Adam Montgomery for the final 15 minutes and Celtic looked like they had settled for two.

However, they had a string of efforts after Ralston got to the byline and cut the ball back. Edouard was denied twice by the goalkeeper before Montgomery’s header was cleared off the line.

What the manager said…

Celtic manager Ange Postecoglou told BBC Scotland: “It was a good game of football. They are a good team, they took it to us at times and made if difficult, but we stood there and tried to play our football. We will go there and try impose our football on the game If you start thinking about protection, you give them a bit of an advantage.

“Kyogo’s always a threat. He’s constantly on the shoulders of defenders. Hart’s improving every game. He’s an experienced guy and it gives the team confidence that he’s in goal.”

Celtic host Mirren in the Scottish Premiership on Saturday at 3pm, before heading to Holland for the second leg of their Europa League play-off against AZ Alkmaar on Thursday at 7.15pm.