Championship Team of the Month for September | Football News 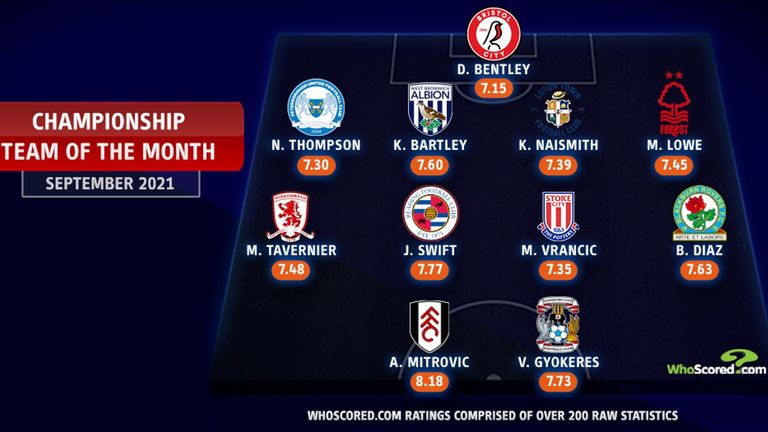 11 of the Championship’s 24 teams are represented in the WhoScored.com Team of the Month for September. Here, starting from the back, they run through the XI in full…

September was certainly a busy month for Bristol City shotsstopper Daniel Bentley. Only Bradley Collins (22) made more saves than Bentley (21) in England’s second tier last month, 10 of which came in a man of the match display at QPR, a record in a Championship game this season. With a WhoScored.com rating of 7.15, Bentley is good value for his inclusion in this XI.

After largely featuring at centre-back in August to mixed effect, Nathan Thompson was moved back to right-back in September and he was impressed here to make the team of the month with a WhoScored.com rating of 7.30. Thompson’s best performance came in a 0-0 draw with high flying Bournemouth where he made 12 tackles, a record in a Championship match this season.

West Brom were one of four teams to go through September unbeaten with Kyle Bartley playing a key role at the heart of the defense. Bartley dominated in the air for the Baggies, winning more aerial duels (51) than any other player. In addition, the centre-back’s 25 clearances ranked among the top 10 players and helped him to a WhoScored.com rating of 7.60.

Luton’s sole defeat in September came at the hands of promotion contenders Bournemouth as Kal Naismith excelled for the Hatters. The notable performance from himself and Luton came in the 5-0 thumping of Coventry in midweek, with Naismith chipping in with an assist, one of two in September. The 29-year-old also ranked third for interceptions (14) to feature alongside Bartley in the team of the month with a WhoScored.com rating of 7.39.

Max Lowe has had a direct hand in two league goals this season, both of which came in September as he provided an assist in the defeat to Cardiff to kick off the month, and netted in the recent 1-1 draw with Millwall. Lowe made at least six more tackles and interceptions combined (35) than any other player to occupy the left-back spot with a WhoScored.com rating of 7.45.

Marcus Tavernier was one of just five players to win multiple man of the match awards in September, those coming in superb individual showings against Nottingham Forest and Blackpool. Tavernier had a direct hand in two goals in September, scoring one, while 12 successful dribbles was the fourth best in the Championship last month to make the cut with a WhoScored.com rating of 7.48.

No player had a direct hand in more goals than John Swift (7) in September as the Reading star scored four times last month. Swift directly contributed to a goal in four of his five outings as the 26-year-old put in another superb set of performances for the Royals. Only one player made more key passes than Swift (13) last month as he features with a WhoScored.com rating of 7.77.

Partnering Swift in the middle of the park with a WhoScored.com rating of 7.35 is Stoke star Mario Vrancic. The Potters midfielder created more goalscoring chances (15) than any other Championship player in September and won the man of the match award in two of his five outings to lock down a spot in the XI.

Rounding off the midfield is Blackburn’s Chilean star Ben Brereton Diaz. The Rovers star had a direct hand in seven goals in September, scoring six, including a hat-trick in a star man showing in a 5-1 win over Cardiff. Diaz’s 22 shots was the second highest return in the division in September with his WhoScored.com rating of 7.63 enough to secure a place on the left.

Completing the XI is Coventry hitman Viktor Gyokeres. Of the seven goals he has scored this season, five were netted in September, with Luton the only side to contain the Swede last month. The 23-year-old also registered an assist, that coming from one of his 10 key passes, the 11th best return in the division, as he rounds off the team of the month with a WhoScored.com rating of 7.73.