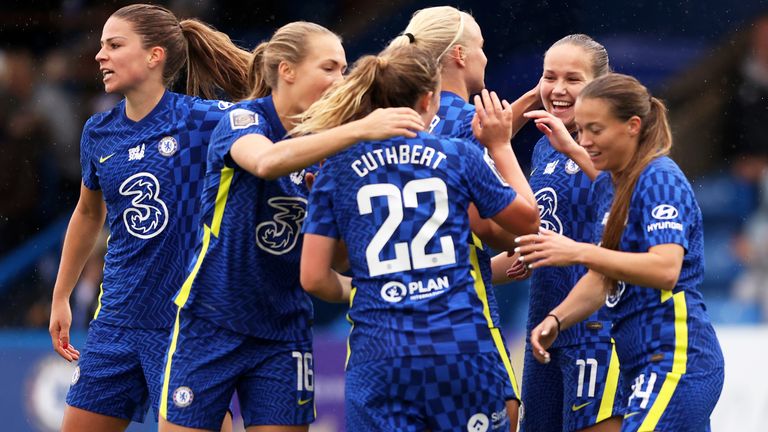 Chelsea Women were given another scare by Brighton Women, but a hat-trick of assists from Fran Kirby helped the Blues to a 3-1 win in the Barclays FA Women’s Super League.

Memories were still fresh of Brighton’s 2-1 comeback victory at Kingsmeadow in February – Chelsea’s only WSL defeat last season – and it was a similar start when Guro Reiten (9) fired the hosts ahead early on.

Chelsea continued to dominate the first half, although Aileen Whelan almost equalized again with Brighton’s only shot of the first half. A catalogue of errors then allowed Sam Kerr (38) to nod home the second and put the Blues in a commanding position.

However, less than three minutes after the break, Danielle Carter (48) swept home the Brighton reply as they looked rejuvenated and ready to spring another surprise.

But Chelsea’s quality soon began to shine through and Beth England (80) made sure of the points after a superb breakaway from Kirby, notching up her first treble of assists in the Women’s Super League.

It marked Emma Hayes’ 150th WSL game as manager in fine style, with Chelsea going top of the table ahead of the remaining weekend games. Brighton slip down into the sixth after two successive league defeats.

Chelsea fired two warning shots inside seven minutes. Millie Bright’s right-wing cross was nodded down by Pernille Harder, but Kerr was marked well and could not quite reach the ball to poke home. The Australian went close again soon after, driving into the area after a midfield steal from Harder, but she fired wide of the target.

But it did not take long for Chelsea to take the lead. Harder found Kirby inside the area, who did well to shield the ball with her back to defenders. She then tapped the ball in for Reiten, who took one touch before rifling home, bobbling past a number of Brighton bodies on the way through.

Player of the match: Fran Kirby.

Brighton almost repeated some history in the 19th minute as Whelan – who scored a quick reply to Kerr’s opener during the Seagulls’ victory last season – went close to an equaliser. Megan Connolly delivered the corner, which Magdalena Eriksson nodded away. But it only fell as far as Whelan, who fired a great half volley goalwards, only for it to be cleared away by Eriksson again.

Chelsea continued to see chances fall their way, but it was a calamity of errors from Brighton that allowed Chelsea to make it 2-0 shortly before the break. Kirby delivered a sumptuous cross into the area, with Walsh coming well off her line to try and collect. But she stalled with Felicity Gibbons just ahead of her, marking Kerr, before clattering into her defender and allowing the Chelsea forward to nod home into an empty net.

Having had just one shot in the entirety of the first half, it took less than three minutes for Brighton to pull a goal back after the break. Whelan collected a throw-in and did superbly well to work herself away from two Chelsea defenders. She then slotted the ball through for Carter, who was relatively unmarked. She took a touch before sweeping past Ann-Katrin Berger, scoring with Brighton’s first effort on target.

But Chelsea soon began to find their feet. Reiten nodded just over from an Erin Cuthbert corner, before Kirby just curled an effort wide of the far post after a devastating attacking move from the hosts. Melanie Leupolz also had a thunderous effort from range that lifted over the crossbar.

The Blues made sure of their victory late on with another superb attacking move. A Brighton goal-kick was nodded down into Kirby path, and she sped down the field. Her cross was too much for Emma Koivisto to stop as it reached England, who took her time to set herself up before sweeping home past Walsh just minutes after coming on.

Player of the match – Fran Kirby

“She’s got three assists and she was instrumental in everything Chelsea did. She linked up play so well and although she might be frustrated that she didn’t get on the score sheet today, she’ll be pleased with the input she had.

“I think it’s her first hat-trick of assists in the WSL to add to that.”

“I couldn’t hit the net myself, so I thought I’d try and get everyone else involved! I like creating things, whether it’s me scoring or an assist – I think I celebrate assists more sometimes – but I just want to influence the team as much as I can.

“Overall, it was a good game. Brighton have started the season really well, so we knew we had to be patient and break them down. We knew if we kept creating those chances, we’d score goals.

“The ball was running a bit faster than we’re used to with the rain, but once we find that rhythm, we can score more goals. We scored three goals at home, we can’t be too disappointed. We can’t score six, seven, eight goals every game, especially against a team like Brighton that defend very well.

“But we’re happy with the goals we did score and we know we can be better.”

Chelsea begin their Champions League campaign on Wednesday when they face Wolfsburg in the group stages. They then host Leicester in the WSL on Sunday, October 10, live on Sky Sports; kick-off 12.30pm. Brighton also play their next game on the same day, hosting Tottenham; kick-off 2pm.