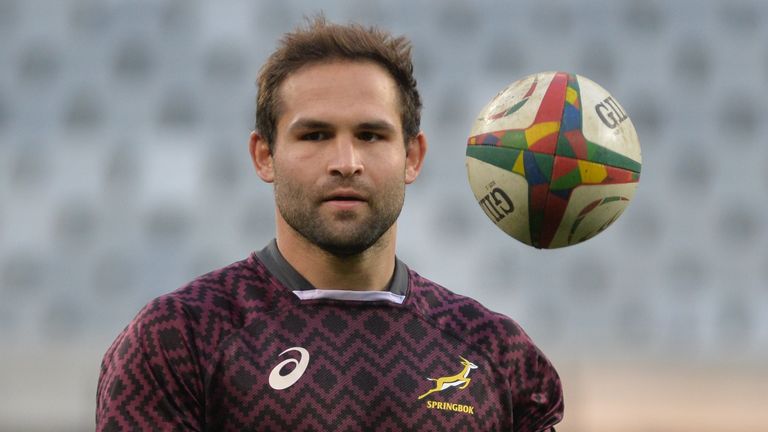 South Africa have boosted their lineout options by naming lock Franco Mostert in the No 7 jersey while Cobus Reinach starts at scrum-half for the deciding Test between South Africa and the British and Irish Lions. Watch all the action live on Sky Sports

South Africa make two enforced changes for the third and final Test against the Lions.

Franco Mostert, who started in the second row in the first two Tests, moves into the backrow after Pieter Steph Du Toit was ruled out due to a shoulder injury sustained in the second Test.

Mostert did well last weekend in that position and will further bolster a bok pack that has Lood de Jager and Eben Etzebeth packing down in the second row.

Scrum-half Faf de Klerk was also injured during the 27-9 win at Cape Town Stadium last weekend but the Springboks have elected to keep Herschel Jantjies on the bench, with Cobus Reinach coming straight into the starting XV to replace him.

Get Sky Sports Lions for £18 extra a month.

Cheslin Kolbe, who was lucky to escape a red card last time out, is back on the wing along with trying scoring machine Makazole Mapimpi and Willie le Roux at full-back.

Veteran fly-half Morné Steyn – who slotted the winning penalty to seal the series for the Boks back in 2009 – is back on the bench as South Africa coach Jacques Nienaber has opted for a five-three split with Damian Willemse and Jantjies the other two backline players on the bench.

There is no place for World Cup-winning No 8 Duane Vermeulen who joined the Springbok camp on Monday after undergoing ankle surgery.