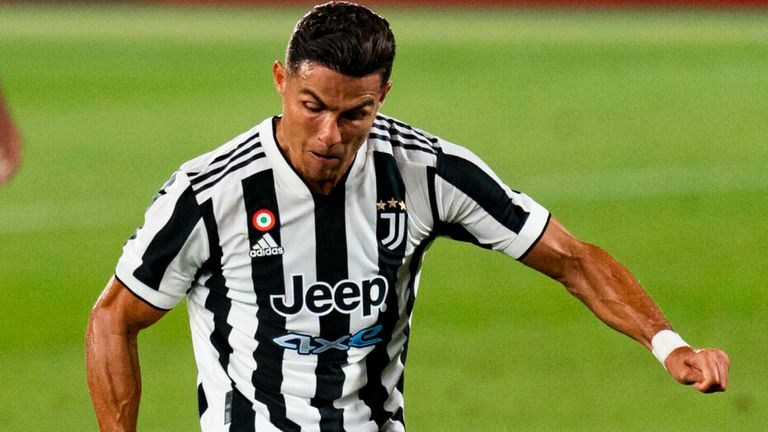 Cristiano Ronaldo asked not to start for Juventus against Udinese in Serie A on Sunday, according to Sky in Italy.

Ronaldo began the game on the bench, before coming on to replace Alvaro Morata after an hour of the 2-2 draw.

The 36-year-old headed home an apparent winner in the fourth minute of stoppage time but, after jubilant celebrations from the forward and his Juve team-mates, the goal was disallowed by the VAR system for a very marginal offside call.

Ronaldo is out of contract next summer and has been linked with former club Real Madrid, Paris Saint-Germain and Manchester City.

Juventus risk losing him for nothing in 2022 unless they sell him this summer or agree a new deal.

We understand Ronaldo is open to leaving Juventus but no club has made an offer for him and he has not officially told the Italian club he wants to leave.

Juventus expect him to stay and vice chairman Pavel Nedved has said as much this weekend.

Any club wanting to sign Ronaldo would have to buy out his Juventus contract, which would cost €28m.

Juventus boss Max Allegri said ahead of the weekend that Ronaldo had no intention of leaving.

Allegri said: “He has never wanted to leave.

“He told me that he’s staying and he will be in Udine.”

Ronaldo: My story at Real Madrid has been written

In a lengthy Instagram post last week, Ronaldo distanced himself from reports in Spain linking him with a return to Real Madrid by insisting his story at the Bernabeu “has been written”.

Real sold Ronaldo to Juventus for a fee of just over £100m three years ago with Ronaldo writing: “Anyone who knows me is aware of how focused I am on my work. Less talk and more action, this has been my guiding motto since the start of my career.

“However, in view of everything that’s been said and written recently, I have to set out my position.

“More than the disrespect for me as a man and as a player, the frivolous way that my future is covered in the media is disrespectful to all the clubs involved in these rumours, as well as to their players and staff.

“My story at Real Madrid has been written. It’s been recorded. In words and numbers, in trophies and titles, in records and in headlines. It’s in the Museum at the Bernabeu Stadium and it’s also in the minds of every fan of the club “