FedExCup Playoffs: Jon Rahm back in action after missing the Olympics due to Covid ‘sucked’ | Golf News 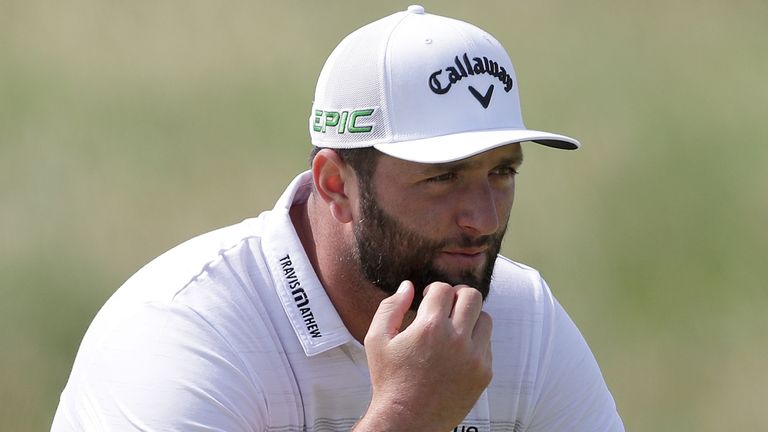 World No 1 Jon Rahm sits fifth in the FedExCup standings heading into the PGA Tour’s season-ending Playoffs, having not featured since The Open; Watch the Northern Trust throughout the week live on Sky Sports Golf

Jon Rahm admitted it “sucked” to miss the Olympics due to Covid-19 and is convinced he did not have the virus for a second time.

Rahm held a six-shot lead when he had to withdraw from the Memorial Tournament after 54 holes due to a positive test, only for the Spaniard to win his first major title on his return to action at the US Open.

The world No 1 had to follow strict coronavirus protocols at the Scottish Open and The Open last month before returning to the United States, where he tested positive – for the second time in seven weeks – just days before he was due to fly out to Tokyo .

“It really is unfortunate,” Rahm added. “It sucked because I wanted to represent Spain. I wanted to hopefully give Spain a medal. I was wishing for a gold medal, but just being part of that medal count for the country would have been huge.

“It was more devastating in that sense. I was more in the mindset of playing for them more than me. Still makes me a little sad, I’m not going to lie. I’m going to have to wait three more years hopefully to qualify for the Olympics, but I was really ready for this one.”

“This was a little harder to digest than Memorial because I’ve done everything the system tells me to do. First one on Thursday negative, Friday negative, Saturday I get my first positive. And then they tested me again that same day, and I apparently was positive again.

“Then I got tested the next two days. One was the saliva test, one was PCR, both negative. Got an antibody test done, so blood test, and I had the antibodies. So I can’t really explain what in the world happened.

“I wasn’t ill. I can guarantee you I didn’t have Covid this time, not at all. I had five tests done, four of them were negative, one was positive. That first time I did have Covid, barely any symptoms, but I had it. This time I had nothing.”

Rahm is making his first start since The Open at this week’s Northern Trust, where he arrives fifth in the FedExCup standings and refreshed for a busy finish to the PGA Tour season.

“I don’t think I’ll ever get a chance to have four weeks off in the middle of the summer and have some time to enjoy with my family,” Rahm added. “We’re gone so often that I know I’m going to miss a lot of things, and I’m going to take advantage of times I get to be home, and that’s what I did.

“The next two weeks, obviously the goal is to win, but the main goal is to get to the last event, to get to East Lake to the Tour Championship in as high rank as possible. So got to keep the good play going.

“I want to hopefully win those events as well, but the important one is the last one, so it’s a bit of kind of like a qualifying few rounds where you’re just trying to get ready and get positioned for the Tour Championship.”

Watch the Northern Trust throughout the week live on Sky Sports. Live coverage begins on Thursday with Featured Groups from 12.30pm via the red button on Sky Sports Golf, ahead of full coverage from 7pm.