Germany crushed Liechtenstein 9-0 in their World Cup qualifier on Thursday as Hansi Flick recorded the best start for a Germany coach with his sixth win from six games in charge.

With five players sidelined due to Covid-19 regulations, coach Flick had to make sweeping changes to his line-up.

But the already-qualified Germans eased past Liechtenstein, who were down to 10 men after 11 minutes, with two goals each from Thomas Mueller and Leroy Sane to top Group J with 24 points, nine ahead of second-placed North Macedonia.

The hosts went ahead with an 11th-minute Ilkay Gundogan penalty after Jens Hofer was sent off for kicking Leon Goretzka with a high challenge in the face.

It got worse for the visitors who conceded three goals in three minutes, starting with Daniel Kaufmann’s own goal in the 20th minute. Leroy Sane made it 3-0, slotting in from a perfectly-timed Goretzka pass with Marco Reus adding another.

With Flick’s predecessor Joachim Low, who received an official farewell before the game, watching from the stands, Germany struck again four minutes after the restart with Sane before late goals from Mueller and Riddle Baku.

Mueller scored his second in the 86th minute before another own goal by Liechtenstein, this time from Max Goeppel, ended their miserable evening.

Romania lost ground in the race for World Cup qualification as they were held to a 0-0 draw at home by Iceland in their Group J clash.

The point left Romania third on 14 points, one behind North Macedonia, who thrashed Armenia 5-0 away

Group H – Croatia and Russia take it to final game 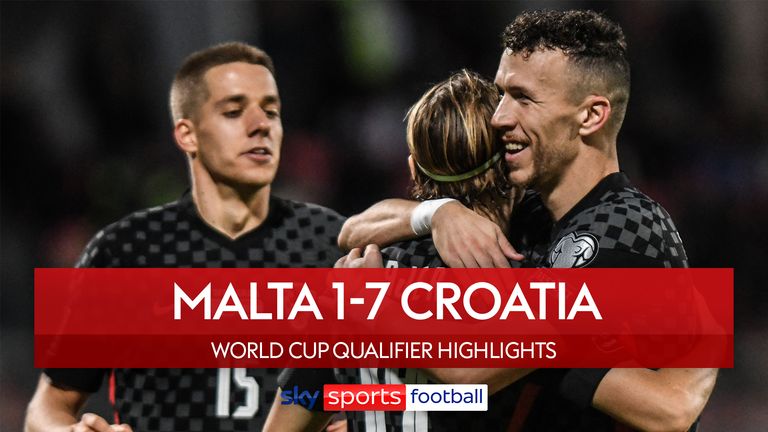 Highlights of the World Cup qualifying match between Malta and Croatia

Croatia stayed on course to qualify automatically for the 2022 World Cup as a 7-1 route of Malta in Group H qualifier left them needing to beat Russia on Sunday to reach the finals.

Ivan Perisic fired Croatia into a sixth-minute lead as he steered the ball into an empty net and Duje Caleta-Car doubled their advantage when he headed home a Luka Modric free-kick.

Hosts Malta pulled one back thanks to a clumsy Marcelo Brozovic own goal before Mario Pasalic netted after a rapid break. Modric then made it 4-1 with a neat finish on the stroke of half-time.

Kramaric netted six minutes later when he took advantage of sloppy Maltese passing in midfield and beat the stranded Bonello with a precise low shot from 40 meters. Majer grabbed his second with a thumping finish into the roof of the net. 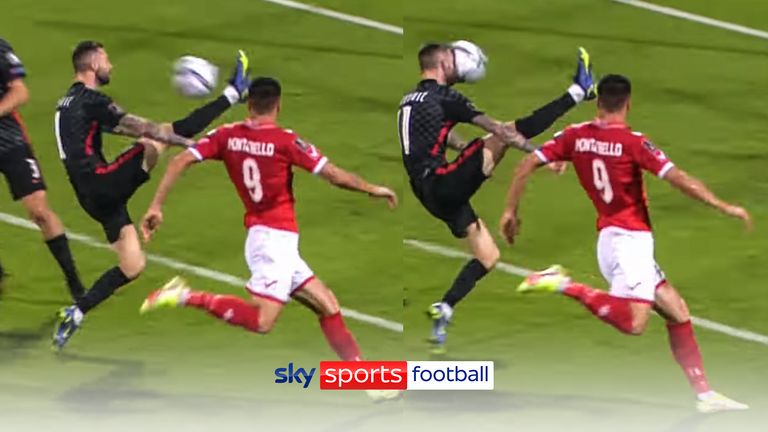 Croatia are second in the group on 20 points from nine games, two behind Russia, who stayed in the driving seat with a 6-0 route of Cyprus,

Alexander Erokhin gave Russia the lead in the fourth minute, but Cyprus often had the better chances either side of half-time, before two Russian goals in two minutes killed off the game.

First, Smolov scored from close range to finish off a counter-attack in the 55th minute, then Andrei Mostovoy beat two Cyprus defenders on his way to scoring a fine solo goal.

Aleksei Sutormin added a fourth six minutes later. Substitute Anton Zabolotny made it 5-0 and Erokhin scored his second to round off the rout late on.

Slovakia drew 2-2 with Slovenia. Neither can qualify via the group.

Group B – Spain edge Greece as Sweden beaten by Georgia

A penalty from Spain’s Pablo Sarabia secured a 1-0 victory away to Greece, with Luis Enrique’s side needing a point from their showdown with Sweden at the weekend to secure a place at next year’s World Cup finals.

Sarabia’s winner came in the 26th minute after Inigo Martinez was tripped following a corner. Sarabia’s low strike found the net to the left of Odysseas Vlachodimos.

Spain comfortably protected their lead in the second half as Greece struggled to create any clearcut chances.

Sweden’s hopes of qualifying directly suffered a serious blow as they slumped to a 2-0 defeat away to Georgia,

Zlatan Ibrahimovic returned to the Sweden side after a knee injury that kept him out of Euro 2020, but not even the presence of his record goalscorer could not save them from an embarrassing defeat.

The Swedes racked up 15 attempts on goal, including gilt-edged chances for Alexander Isak and Viktor Claesson, but it was the home side who took the lead through Khvicha Kvaratskhelia in the 61st minute after a goalmouth scramble.

The Swedes continued to create chances but Kvaratskhelia struck again, blocking a clearance from Victor Lindelof and racing through to fire home in the 77th minute.

Spain now lead Group B with 16 points, one ahead of the Swedes, who they host on Sunday in their final group match.

Sweden must beat Spain in Seville to qualify automatically for Qatar 2022 while a draw would be enough for the Spanish to progress. The runners-up will head into the play-offs in March.

Group A – Portugal draw with Republic of Ireland 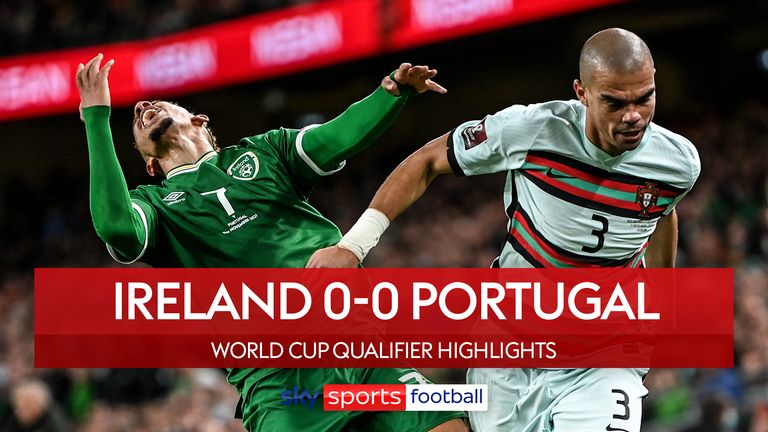 Republic of Ireland put in a spirited display to secure a 0-0 draw with 10-man Portugal, whose hopes of automatic qualification for next year’s World Cup now rest on a winner-takes-all clash with Serbia on Sunday, live on Sky Sports.

Portugal, led by Cristiano Ronaldo, dominated the early exchanges with Gavin Bazunu having to save from Andre Silva and Seamus Coleman blocking the Manchester United forward’s goal-bound shot, but the hosts held firm as the first half reached its mid-point.

Ronaldo wasted the best opportunity of the game midway through the second half, heading Andre Silva’s cross wide before Portugal’s challenge faded with the sending off of Pepe for two second-half bookings.

Azerbaijan played with 10 men from the 21st minute after Tellur Mutallimov was sent off for a vicious foul on Olivier Thill. Substitute Sebastian Thill also scored for Luxembourg. Azerbaijan finished their qualifying campaign with one point from a draw with the Republic of Ireland.