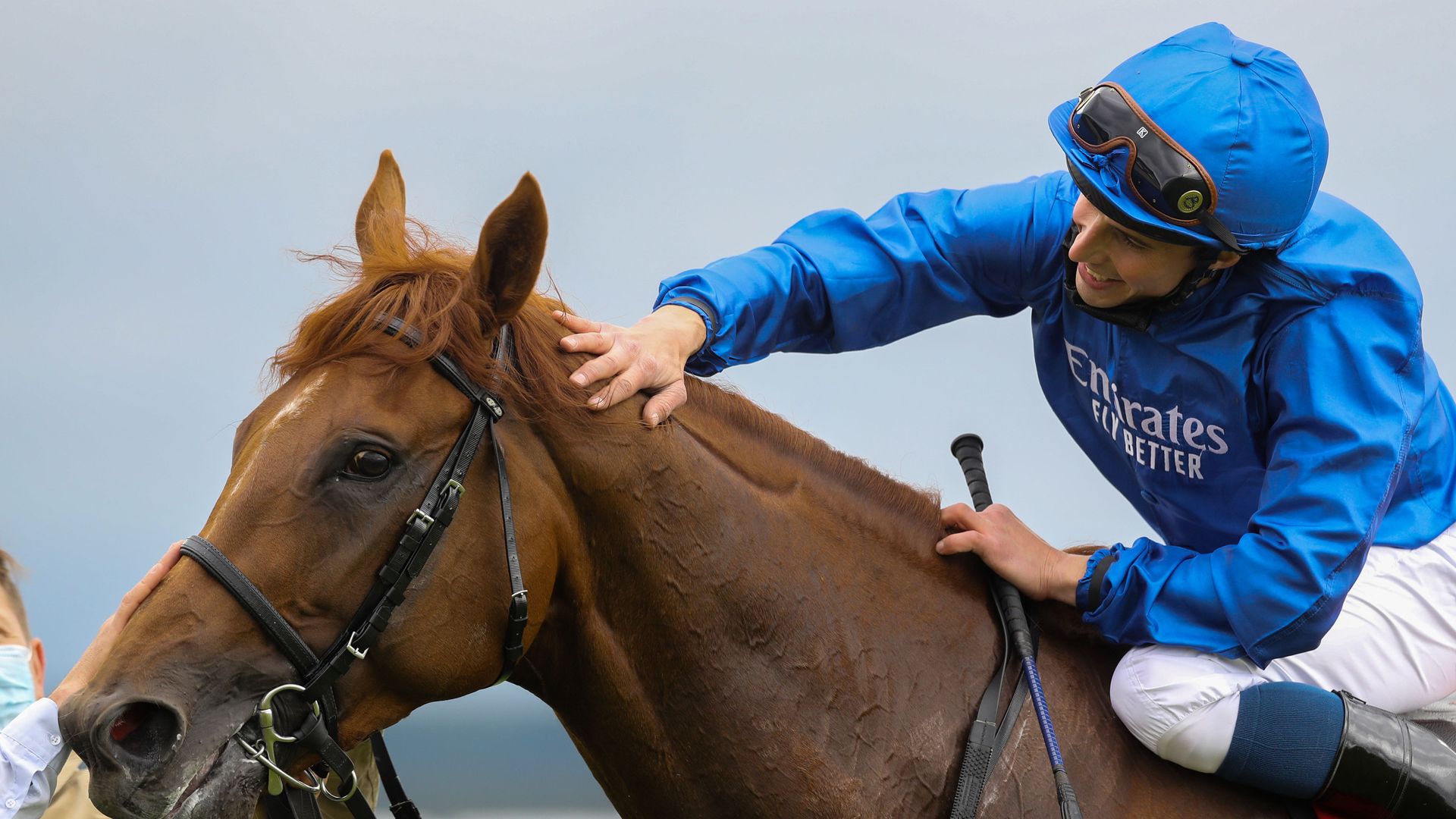 Hurricane Lane is set to go off the short-priced Cazoo St Leger favorite as he seeks to give Godolphin a seventh victory in the Doncaster Classic.

Classic Cliche carried the famous royal blue silks to victory back in 1995 – and further success has followed with Nedawi and Mutafaweq in 1998 and 1999, Rule Of Law in 2004, Mastery in 2009 and Encke, who denied Camelot the Triple Crown in 2012.

Victory will draw Sheikh Mohammed’s operation level with Archibald Hamilton, the 9th Duke Of Hamilton, who was one of the earliest winners of the world’s oldest Classic in 1786 with Paragon.

Hurricane Lane began this season somewhat under the radar, with just a Newmarket novice win to his name – but in winning the Dante, the best trial for the Derby, he announced himself as a major player.

While he met with his first defeat when third to stablemate Adayar at Epsom, he has since won the Irish Derby and the Grand Prix de Paris to mark himself out as a top-class colt.

Trainer Charlie Appleby is confident of securing his first St Leger success, telling www.godolphin.com: “This has always been Hurricane Lane’s objective since the Grand Prix de Paris, and his preparation has gone well.

“He has consistently improved with every start this year and looks a lot more mature physically and mentally compared to earlier in the season.

“He is the class horse in the race and looks the one to beat.”

“It’s a race I always look forward to, and Hurricane Lane goes there with a good profile,” said Buick.

“He’s only been beaten once, in the Derby behind Adayar, and that was a good run in itself. Hurricane Lane’s form before and since is rock solid, and he’s really shown his quality in the Irish Derby and the Grand Prix de Paris – where he was spectacular.

“The way he finished off both races suggests there ought not to be a problem with the trip, but you never know until you try it.

“With his run style and his breeding, you would imagine he would stay as well as anything else would, and he’s got the quality, but I’ve ridden non stayers before in the race who I thought would get the trip.”

Like Godolphin, Aidan O’Brien already has six St Leger victories on his CV – and fires a four-pronged assault in search of his seventh.

The Ballydoyle maestro’s chief hope appears to be High Definition, who spent the winter months as favorite for the Derby, but is winless in three starts this season.

The Galileo colt made a promising enough start to his campaign when third behind Hurricane Lane in the Dante, but missed Epsom after a setback and has since failed to fire in either the Irish Derby or the Great Voltigeur at York.

O’Brien said: “High Definition had a little slip in the Irish Derby when he stumbled and he just lost his confidence a bit. York was his first run back after that, and we were happy with his run there and we thought he would come on mentally for it.

“He’s a horse we’ve always thought that he could get further than a mile and a half.”

Dettori, also bidding for a seventh Leger success, rides High Definition for the first time, and said: “He was Derby favorite for six months and is kind of the forgotten horse.

“His Dante run wasn’t too bad over a mile and a quarter – he was two lengths behind the favorite (Hurricane Lane).

“Hopefully he will relish the distance.”

He added: “They all seem to be well. The Mediterranean is in good form, and he ran very well at York the last day. We’ve been happy with him, and it looks like he might stay a bit further.

“Sir Lucan is well – he ran well at Goodwood and wasn’t beaten far at York as well. Frankie just thought a little bit more cover might have suited him, but he still ran a nice race.

“Interpretation has been progressively and he looks like he stays very well – he’s a very relaxed horse. Hollie rides after having a couple of rides for us at York this year.”

Johnny Murtagh surprisingly never won this Qipco British Champions Series contest during his illustrious riding career, but has strong claims of breaking his duck in it as a trainer with the improving Gordon Stakes winner Ottoman Emperor.

“I never rode the winner of the St Leger, although I didn’t ride in it that often, so to win it now as a trainer would be massive,” said Murtagh.

“He’s a horse that has been on the improve all season. He came out of Goodwood well and he’s unexposed.

“He has a chance, but he has to stay the distance – it’s a tough race at Doncaster for the three-year-olds.

“Having said that, he’s on an upward curve, and we’re excited about the weekend.”

Mojo Star finished in front of Hurricane Lane in the Derby, but behind him in the Irish version, when he had excuses.

Richard Hannon has since taken him to Newbury for a confidence-boosting win.

“The flat, galloping track will suit. He was probably soundly beaten at the Curragh – but we almost got knocked over, and it took him a long time to get going,” said Hannon

“The extra two furlongs will suit him much more. He’ll get the trip. It will be more to his liking – the harder they go, the more it will be to his liking.

“He ran a very good race in the Derby. He’s not the one to beat, but he’s been underrated and deserves to take his chance.”

Youth Spirit won the Chester Vase for Andrew Balding back in May, and has been on the premises in several big races since.

He will be ridden by Tom Marquand, who won the race last year on Galileo Chrome.

“Youth Spirit didn’t run up to expectations in the Derby, having won the Chester Vase, but he’s come back in good form following a rest and has run superbly since at Goodwood and York,” said the jockey.

“I think he’s entitled to be involved, and he’s about twice the price of horses whose form he ties in really well with. He’s one I’m looking forward to.”