Josh Taylor and Terence Crawford could set up fight between undisputed champions for 2022 in UK, says Bob Arum | Boxing News 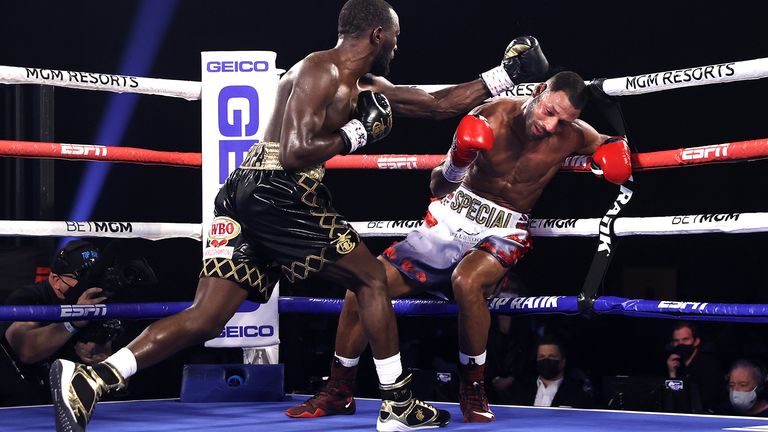 Josh Taylor could bring a fight with Terence Crawford which pits two undisputed champions against each other to the UK next year, says his promoter Bob Arum.

Taylor’s recent capture of every championship in the super-lightweight division emulated the feat accomplished by Crawford in 2017.

The undefeated champions from Scotland and America could now be on a collision course if they get through their next fights.

“Taylor is going to fight Jack Catterall, that was a deal made with the WBO,” promoter Arum told Sky Sports.

“It is his mandatory.”

Taylor’s defense against unbeaten Catterall is targeted for later this year in Scotland.

Crawford, meanwhile, has been ordered by the WBO to defend his welterweight title against mandatory challenger Shawn Porter.

“We hope the Crawford vs Porter fight would take place in November or early December,” said his promoter Arum.

“Therefore if Crawford and Taylor win it would naturally set up a fight, hopefully in the UK, for April, May or June.

Porter is a former two-time welterweight champion who lost an exciting split decision to Crawford’s main rival Errol Spence Jr, who will fight Manny Pacquiao in an unification bout on August 21.

“But Crawford is the best welterweight in the world.”

Arum also laughed off the idea that Pacquiao, now aged 42, could be a future opponent for any of Top Rank’s champions.

“[Pacquiao’s long-term ally] Freddie Roach is a great trainer but he doesn’t read the newspaper!

“Pacquiao, after the fight with Spence, won’t be available to fight Taylor or anybody else because he will run to be president of the Philippines!”

“They were all too good for me and I keep proving them wrong, and I’ll prove them wrong again.

“I believe in my own ability. I believe I’ve fought better opposition than Crawford has, although Crawford is very, very good, he’s elite level.

“But he hasn’t fought the best opponents in his division. He’s fought good fighters, good opposition, but I believe I fought at the better level. I fought better fighters on the way up.

“Ask any fighter if they can beat Terence Crawford. Yeah, especially me. I feel I can win it out the park, albeit a very tough fight.

“I have to be at my very best to win that fight. Yes, I do think that, but I do think I can win the fight.”