Jurgen Klopp is “relaxed” over Jordan Henderson’s future even though the Liverpool captain has yet to sign a new contract.

Virgil van Dijk on Friday became the latest player to agree a new deal After Alisson, Fabinho and Trent Alexander-Arnold all committed their futures to the club.

Henderson, however, has yet to extend his Anfield contract. The Premier League-winning skipper has less than two years remaining on his current deal and there are concerns he could leave Liverpool a free transfer like his former midfield partner Georginio Wijnaldum.

“I know what’s going on behind the scenes and am relaxed,” Klopp told Sky Sports News ahead of Saturday’s Premier League opener away to promoted Norwich.

“We don’t talk about these kinds of things and we cannot make exemptions for one specific case.

“The one thing I can say is nobody has to worry. Things will go their way and be handled like they should be.

“That’s all I can give you as news but if I’m relaxed about this then you can imagine it’s going in the right direction.”

Klopp says the competition within the Premier League will be interesting going into the new season, with a number of teams strengthening during the transfer window

Klopp described holding onto the above quartet as a “massive piece of business” and says his current squad have the potential to better last season’s third-place finish in the Premier League.

“The most important thing for a football club is to have a really good football team,” he said. “And when you have them together you have to keep them.

“That’s really important because when there are big changes and you have to start anew in different positions, to fill that hole, that’s a big problem in football. I’ve had that often enough in my life.

“But we don’t have that here now. It’s great news all these boys have signed new contracts.

“Do we need to strengthen further? It’s difficult because we have a really good team. When you look at the squad I have together for this game and how much potential there is to improve… We were quite successful with a similar squad in the last two or three years.

“Is there still space to improve? Yes. Others might think the only way to improve the squad is by bringing in players. That’s one way to do it. But if you can’t do that, and this is the case for us, you have to use the situation you have.

“Do we need more players? I don’t see that.” 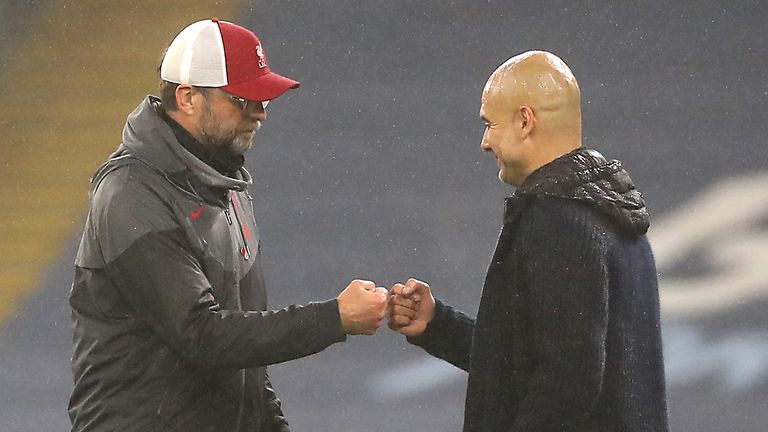 Klopp says he is “never surprised” by the big spending of Liverpool’s Premier League rivals, which far exceeds his own club’s this summer.

Liverpool’s only arrival during the off-season has been centre-back Ibrahima Konate, a £36m signing from RB Leipzig.

With the deadline not until August 31, there is the potential for further big-money signings.

“I’m not surprised they spent that money because these clubs don’t depend on these kind of things [the financial implications of the coronavirus pandemic]” Klopp said ahead of Liverpool’s season opener at Norwich on Saturday, live on Sky Sports.

“I know they find a way [to spend]. We know our situation.

“We all know the situation of Chelsea, City and PSG. We have our way to do it. We are allowed to spend the money we earn. That’s what we always did.”