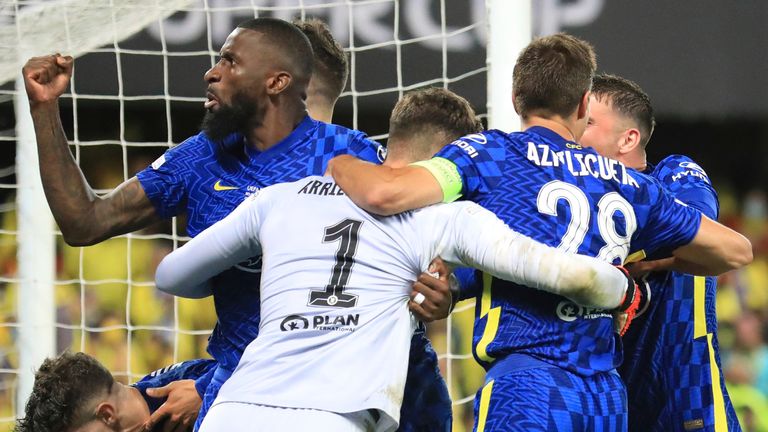 Thomas Tuchel says the decision to bring on Kepa Arrizabalaga before penalty shootouts was made months ago as the Spaniard’s heroics helped Chelsea win the Super Cup.

Kepa replaced Chelsea No 1 Edouard Mendy with just a minute to go in extra-time against Villarreal in Belfast, with the score at 1-1, before he saved two penalties to help the Blues to a 6-5 penalty shootout victory.

Mendy’s body language when being replaced suggested the move was planned, and Tuchel said after the game that the decision had first been made before Chelsea’s FA Cup tie with Barnsley in February, the German’s first cup game in charge of the club.

Tuchel was full of praise for both goalkeepers, as the European champions made a winning start to competitive action.

“It was not spontaneous,” Tuchel told BT Sport. “We talked about it with the goalkeepers when we came and had the first cup game against Barnsley.

“So we had some statistics, we were well prepared, that Kepa is the best in percentage in saving penalties.

“The analysis guys and the goalkeeping coaches showed me, introduced me to the data, then we spoke with the players, that this can happen when we play in a knockout game, and since then they know.

“Of course we needed to do what’s good for the team. It was necessary. I’m happy that it worked.

“There is proof that Kepa is better at this discipline. These guys are true team players. I am happy for Kepa and happy for Eddy, to have a goalkeeper like this, to not show the pride to not step off the field, and is happy to do it for the team, to take one for the team. It’s top.”

Kepa also told BT Sport after the game: “It’s not a typical situation. Finally we won, and we are so happy. I think all the team did a fantastic job, and we got the medal.

“It’s not a normal situation. But I was ready because I knew that this can happen. I try to be ready mentally, and physically.”

Mendy added: “Of course I am happy, because we won. We work for that, for the success, and I knew since last year, if Kepa comes on the pitch, he will help the team, he did today, and I am really happy with Kepa.

“It’s teamwork, it’s a team effort. When you play for Chelsea, you play for success, for titles. We did that together, and we are happy.”

Chelsea had taken a deserved lead after 27 minutes thanks to Hakim Ziyech but Villarreal improved from there and earned their equaliser through Gerard Moreno after 73 minutes.

Tuchel admits Chelsea were patchy, but on the whole deserved to win.

“Second half we were too passive, too many ball losses they equalised, well deserved, right after we conceded the goal we were very strong again.

“We invested I think more over the 120 minutes, and we deserved to win.”

Tuchel’s side kick off their Premier League season at home to Crystal Palace at 3pm on Saturday, and Tuchel said 120 minutes was not ideal preparation.

“Mentally [tonight was] a good one, physically the worst thing that can happen to play Saturday afternoon. Victory helps us regenerate and we have to be careful now,” he added.

One negative for Chelsea was a worrying shoulder injury for goalscorer Ziyech, who was taken off in the first half and appeared on the sidelines in the second half with his arm in a sling.

“If you take a player out during the first half, it is serious. Unfortunately, because he was a very decisive player for us in the last games.”

Analysis: Tuchel gets it right again

Sky Sports’ Adam Bate: “It was not easy for Chelsea and if Villarreal had edged this there could have been few complaints. After a strong start, the Champions League winners found it difficult. But Tuchel’s stunning start to life at Stamford Bridge continues. He got the big call right .

“There was some bemusement when Kepa came on, the accepted wisdom being that Mendy is the superior goalkeeper and as such would be better placed to save the penalties in the shootout too. But Tuchel does not do accepted wisdom, he does logic and analysis.

“The data told him that Kepa is more likely to save spot-kicks than Mendy. He went with it knowing that while there would have been criticism if it had not gone Chelsea’s way, there was a method behind it. The lesson from his time in England is that Tuchel’s methods work.”

It is a quick turnaround for Chelsea. Their Premier League season begins against Crystal Palace at Stamford Bridge on Saturday at 3pm.