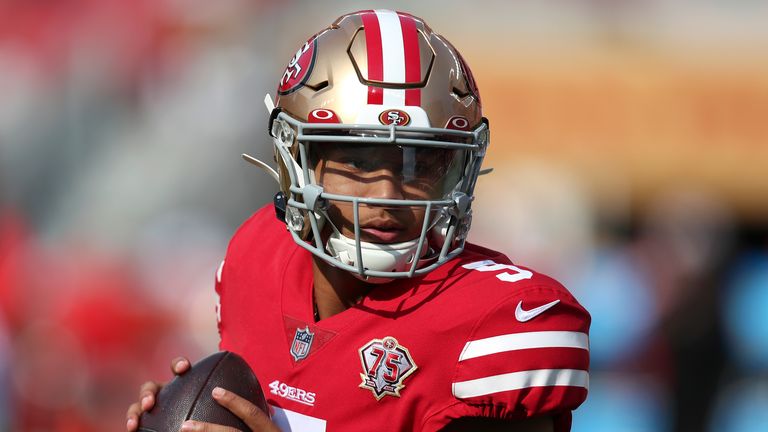 Asked when he would routinely watch game tape, Trey Lance admitted he planned on studying film later that night having just made his San Francisco 49ers debut in Saturday’s preseason loss to the Kansas City Chiefs.

Between a string of more than tidy highlight throws were some minor ‘miscues’ processing play-calls via his headset, four sacks that will have enhanced his decision making when it comes to leaving the pocket and misfires he would have no doubt liked back.

But that was what Kyle Shanahan wanted, for the No. 3 overall pick to learn. An ideal scenario arrived with the 49ers penned in on their own one-yard line in the second quarter when Lance underlined his poise with a 34-yard completion to Charlie Woerner to move the sticks.

“I do have confidence in him,” said Shanahan. “But there’s not much to learn from your first time running on the one-yard line. So you’d rather start it out the harder way and whether it’s good or bad, at least it’s experience when it doesn’t matter.

“So and then for him to make a big play like that, that guy wasn’t the first read. The fullback in the flat is, and it took a hitch up and hit Charlie [Woerner] and made a big play, which was nice.”

Lance finished four of 15 passing for 128 yards and an 80-yard touchdown pass to wide receiver Trent Sherfield as the North Dakota State product kickstarted his campaign to permanently dislodge Jimmy Garoppolo from under center.

“Yeah there was some good and some bad, I mean, by no means was it perfect. Definitely missed a couple,” added Shanahan. “There was a couple of spots that you’d like them to go to different places. Sometimes a couple of balls that sailed on him I think he’d like to have back.

“But he also came out pretty good too, making the right plays, getting in the right spots. We had a couple of drops there with, especially on a third down that he could have kept the drive going if we had caught it. But it was a good first day.

“I mean, I didn’t want it to go perfect for him. I’d like some things that he could learn from and there will be a lot of things that we can go over tomorrow.”

Absent on Saturday was the rushing threat that amounted to 1,100 yards and 14 touchdowns on the ground in his sole season as a starter in college, the four sacks for -34 yards serving as a valuable learning experience.

“But the offensive line did a great job today. It’s on me 100 per cent as far as protection goes and everything like that. Like you said, me using my legs to make plays and extend place and extend drives. Wish I would have done that a little bit better tonight as well.”

Lance made just 17 total starts during his time at North Dakota State, 16 of which came as a redshirt freshman in 2019 before he appeared in a showcase game in 2020 in the wake of the FCS season being postponed to the spring.

On that note, Saturday’s preseason opener was a welcome return to live game action for one of the most enthralling stories of this year’s rookie class.

“It was super exciting,” said Lance postgame. “Kind of the moment you dream of scoring your first touchdown. Even though it’s preseason, it’s pretty cool.

“With my team-mates, the guys in that locker room, that they were so excited for me and for Trent (Sherfield) making that play. It was for sure a special moment and I wish I could’ve capitalized on the opportunities that came after that.”