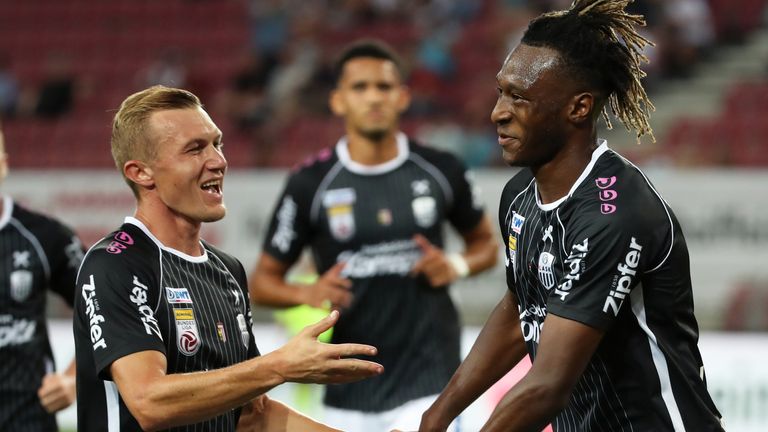 St Johnstone secured another impressive away draw in Europe but the Perth side should really have gone on to win after Chris Kane’s opener against LASK.

Kane scored in the 17th minute and the Saints had a host of chances to double their lead in the first leg of the Europa Conference League play-off.

But the home side secured a 1-1 draw after Jamie McCart conceded a penalty following a needless challenge in the box, which was punished by Mamoudou Karamoko on the hour mark.

The Saints survived some late scares to secure a 1-1 first-leg draw, just like they did in the Europa League against Galatasaray, and showed more than enough to suggest they have a real chance of making the group stage in Perth next week.

LASK were effectively away from home with their Linz ground being renovated and their fans forced to make a three-hour drive to Klagenfurt.

But they beat Vojvodina 6-1 there in the previous round and have a notable recent record in Europe, which includes reaching the last 16 of the Europa League in 2020 and wins over Sporting, Basel, PSV Eindhoven, Rosenborg and AZ Alkmaar.

The Saints survived some early pressure before growing into the game and wide men Michael O’Halloran and Glenn Middleton almost teamed up for a chance before combining to set up Kane.

O’Halloran did well to get the ball back to Middleton, who delivered a measured low cross which Kane got a toe to and steered home.

Callum Davidson’s side almost doubled their lead two minutes later. Middleton again set up the chance, getting outside his man and cutting the ball back. Ali McCann ran on to it and controlled a left-foot shot but the home goalkeeper produced an excellent stop with his outstretched hand.

Middleton saw a free-kick saved before Zander Clark tipped over a dipping, swerving effort from Jan Boller late in the half.

The Perth men came close to scoring four times in the opening 10 minutes of the second period. Middleton forced a good stop with an angled drive, Callum Booth hit a powerful long-range effort not far wide, and Murray Davidson sent a free header straight at the goalkeeper from Middleton’s free-kick.

Middleton should have done better moments later when O’Halloran sets him up with a pacey break, but the on-loan Rangers player took a poor touch and could not get an angle to shoot after rounding the goalkeeper.

However, the home side were gifted a lifeline moments later when McCart made a challenge he did not need to make and brought down Thomas Goiginger, who was going towards the by-line with another Saints player in close attention.

Karamoko hit the penalty agonisingly just beyond the reach of Clark and into the bottom corner.

Saints settled after the blow but had a spot of fortune when Marvin Potzmann’s volley hit an oblivious Booth.

Middleton had a late chance to win it after Shaun Rooney’s long throw fell for him but his shot was charged down.

Saints were caught on the break in the 90th minute but Keito Nakamura’s header hit off the inside of the post before the danger was cleared.

Clark then got two strong hands to push out Boller’s well-struck free-kick.

St Johnstone host Dundee United in the Scottish Premiership at 3pm on Sunday, before the return leg with LASK on Thursday at 7pm.